Battle of Crecy - Start of the Hundred Years War

The Battle of Crecy took place on August 26, 1346 and marked the beginning of the Hundred Years War.

It opposed the troops of Philippe VI de Valois to those of Edward III of England.

It is remembered as a battle where a couple of thousands Welsh archers defeated thousands of French horsemen and infantry men.

The Battle of Crecy was the first of many conflicts that opposed French and English.

These conflicts resulted from the intricate relationship that linked the two royal dynasties.

Indeed, Edward III was the grand-son of Philip IV the Fair through his mother Isabella of France.

Therefore, on October 7, 1337, he publicly challenged the legitimacy of his cousin Philippe VI de Valois and claimed the crown of France.

Edward launched a couple of military incursions in the kingdom of France, securing the alliance with the Flemish.

On July 12, 1346 he landed in Saint-Vaast-la-Hougue with an army of 40,000 men with the intention of marching towards Paris.

He easily seized the Cotentin Peninsula as most towns were not fortified, then marched north to join his Flemish allies.

However, on the way he had to cross the Seine and Somme rivers.

His attempt failed in Rouen, as most Picardie towns were heavily fortified.

However, he managed to cross the river farther east, at Poissy.

Meanwhile, Philippe VI and his vast army had reached Amiens where they expected to corner Edward between the Seine and the sea.

In the early hours of August 24, Edward crossed the Baie de Somme at low tide via the ford of Blanquetaque near Saint-Valery-sur-Somme.

Once the Somme crossed, he and his men found themselves in the marshy land, while Philippe IV's army had already reached Abbeville.

Edward had no choice but face the French!

Therefore, on the eve of August 25, he set up his camp on the hills overlooking the little village of of Crécy-en-Ponthieu.

Philippe's large army included his vassals, but also his outside allies, such as John I of Luxembourg King of Bohemia, Charles IV and Charles II of Valois, and the Duke of Alençon the King's brother.

Observation tower built on the site of the Moulin d'Edouard

The English took position on the hill overlooking Crécy and its valley.

Edward III commanded the second line, and his son the Black Prince and the Earls of Northampton and Arundel the first line.

The number of soldiers engaged in the Battle of Crecy is still debatable.

However, we know that Welsh archers made up 3/4 of the English troops and were in the front line.

On August 26, weather conditions became highly unfavorable to the French as they reached Crecy and its valley at 3pm.

Indeed, a huge storm broke out and soaked the terrain.

Philippe had organized his troops into 3 lines.

He placed the Genoese archers on the front line in order to protect his horsemen positioned on two lines.

The infantry men were positioned on the wings and at the rear.

However, not only was the sloppy terrain wet and slippery, but the heavy rain damaged the strings of the Genoese crossbows.

Indeed, their strings, made from hair, lost their power when wet.

Philippe became quickly aware of the issues, and therefore decided to postpone the attack to the following day.

However, his men were so worked up against the English that they didn't wait for his order and simply rushed up towards the hill.

This lack of discipline and weakness in commandment led the French to one of their worse defeats in history.

Tragically the ineffective weapons and the weight of the heavy equipment slowed the Genoese archers' progress.

They fell under the Welsh archers' constant flow of arrows (their hemp bowstrings were more effective when wet!)

Panic spread in the Genoese archers' rows and they folded and retreated.

Philippe took their retreat for a treason and ordered his horsemen to kill them!

The French Calvary was therefore completely exposed to the arrows of the Welsh archers and blocked by the defensive rows of stakes.

However, in the early hours of August 27, they managed to break through the Welsh archers lines and started to massacre them.

Their success was short lived though.

Blinded by the rising sun and slowed down by the weight of their armor, they became isolated.

The archers targeted their horses, forcing them to dismount, and massacred them!

Philippe VI was injured in the face.

He abandoned the battlefield and took refuge in the nearby Château de Labroye where he called "Open , this is the unfortunate King of France! "

The blind Jean de Luxembourg, remained heroically on the battlefield; he asked his men to tie him on his horse and kept fighting to the death.

Site of the Battle of Crecy en Ponthieu

Aftermaths of the Battle of Crecy

The victorious Edward III then marched towards Calais, which he captured after a year-long siege.

The number of soldiers who took part to the Battle of Crecy varies according to the sources.

The number of casualties among the 50,000 men on foot is unknown though.

The English seem to have lost between 100 and 300 men! Quite a difference!

The French lost the Battle of Crecy because of their indiscipline and the lack of commandment.

This conflict had a terrible impact on the French nobility, as so many heirs died on the battlefield.

The battlefield of Crecy today

The first is a two-storey wooden tower built in 1984 along the road D111 to Dompierre-sur-Authie.

It stands on the site of the windmill from where Edward III monitored the progress of the battle.

The windmill was pulled down in the 19th century but has left its name to the site: Moulin d'Edouard III.

Access is free, and you'll find two orientation tables on the upper level.

They clearly indicate the positions of the French and English armies, and the progress of the battle, and allow you to replace the armies in the current landscape.

That said, the former battlefield has today left place to a vast cultivated field that gently slopes gently toward the valley.

It is hard to believe, as your eyes scan it, that it was the battlefield of one of the most important battles in French history!

The second memorial is the Monument of John of Luxembourg, which stands in the main square of the village of Crecy, and honours the memory of the heroic blind man.

Finally, a Cross of Bohemia stands outside the village, on the spot where John of Luxembourg died. 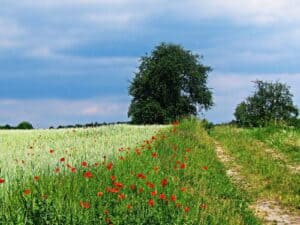 Picardie is located in north-west France, and is now part of Hauts de Seine - Nord-Pas-de-Calais-Picardie, one of the 13 new regions created in January 2016
Continue Reading
Translate »
Scroll to Top