Saint-Sauveur-le-Vicomte fortress and abbey in Cotentin

Saint-Sauveur-Le-Vicomte is nestled on the heights of the Douve Valley, in the heart of the Cotentin Peninsula, among marshes, forests and farmland.

The town today unfolds around its Benedictine abbey and the ruins of its once mighty fortress.

The river floods, which once isolated the Cotentin Peninsula from the rest of France, turned Saint-Sauveur-le-Vicomte into a major strategic place.

This is where Neel de Nehou chose to build the fortress his descendant Geoffroy d'Harcourt reinforced 3 centuries later.

Two warriors, two lords of Saint-Sauveur, who made their castle famous!

The Viscounty of Cotentin was created to reward a Norman baron when the Duchy of Normandy was founded in 911.

His descendant Neel Nehou of Saint-Sauveur made a name for himself in 1047; he led the revolt of the Norman barons against William the Bastard, better known as William the Conqueror.

You can easily guess what happened; William was not nicknamed The Conqueror for no reason!

Neel built the fortress of Saint-Sauveur at that time, at the crossroads of the roads connecting Port-Bail and Barfleur and Cherbourg to Coutances and Mont-Saint-Michel.

Weekly markets, annual fairs and the river port built at the foot of the castle triggered the development of the town of Saint-Sauveur. 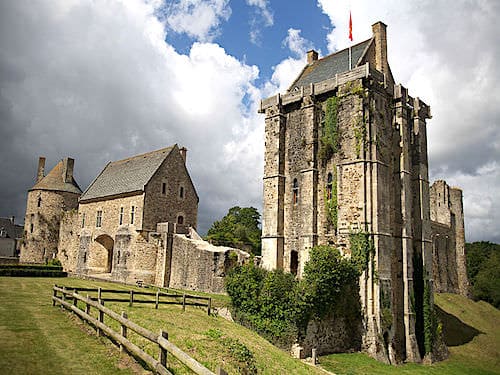 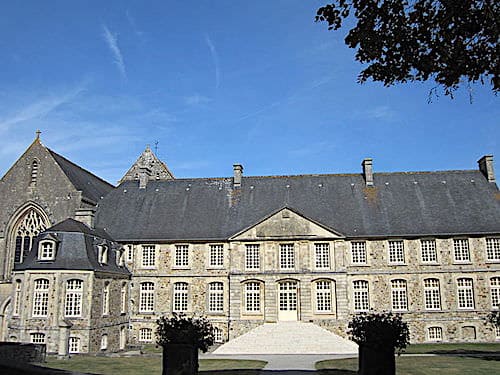 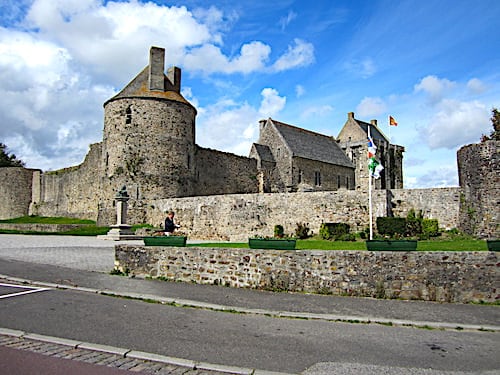 Round tower and donjon

Geoffroy d'Harcourt, Viscount of Saint-Sauveur and ally of the English

Geoffroy d'Harcourt, who inherited and reinforced the fortress during the Hundred Years War, tarnished further the reputation of the lords of Saint-Sauveur.

It all began when he asked the hand of a rich heiress, but was turned down in favour of the son of Robert Bertran de Bricquebec.

The story doesn’t say if he was madly in love with the young woman; however, we know that this union would have considerably increased his influence and power!

He therefore never accepted this affront and embarked on a personal war against his rival; he eventually exiled himself to the court of England to escape royal punishment.

To make things worse, he took revenge on the Briquebec and the king of France in 1346 by allying himself to Edward III and helped him invade the Cotentin.

The English progressed northward and tragically crushed the troops of Philippe VI at the Battle of Crecy.

However, Geoffroy d'Harcourt made an act of contrition after the battle where his brother perished, and obtained the pardon of the French king.

He didn’t repent long though, as he sided again with the English when King Jean II murdered his nephew in 1356!

Geoffroy’s ultimate treason took place a few months later when he died; he indeed bequeathed his castle of Saint-Sauveur to King Edward III, thus consolidating an English settlement in Cotentin.

The French recaptured the fortress in 1375 but the English seized it again.

Saint-Sauveur-le-Vicomte became definitively French in 1450 after the Battle of Formigny, which marked the end of the Hundred Years War in Normandy.

Besieged twice during the Hundred Years War, the old fortress was once more ransacked in 1575 when Protestants captured the town during the Wars of Religion; it was eventually dismantled in 1598.

Fortunately, the hospital built in 1691 in the courtyard prevented it from being demolished further; however, the remaining buildings slowly fell into ruins.

All that remains today is the vast polygonal 13th century enclosure and its circular towers.

The square dungeon Geoffroy d'Harcourt built in 1346, with its seigniorial reception room and chamber, and the guard room which accesses the walkway, also survived.

So did the two massive towers that flank the castle main entrance and the chapel that houses the town’s tourist office.

The Chateau of Saint-Sauveur-le-Vicomte is a classified historical monument and is open to the public.

Neel built the Benedictine abbey of Saint-Sauveur-Le-Vicomte around 1070 to replace the community of canons who lived until then within the castle enclosure;.

The Romanesque abbey church, although not entirely completed, was consecrated in 1165.

The abbey suffered badly during the Hundred Years War as the defenders of the castle turned it into a stronghold.

The church’s choir and transept, destroyed during the conflict, were rebuilt in Flamboyant Gothic in the 15th century.

Sadly the abbey was placed (in commendam) under the jurisdiction of a commendatory abbot who personally received its revenues without exercising any authority over the inner discipline of the monks.

This fatally led to its decline.

Only one monk lived there at the French Revolution; the abbey was sold as national property and the church converted into a stone quarry.

The superior mother Marie-Madeleine Postel acquired the ruined buildings in 1832 and undertook its reconstruction.

Although not completed, the abbey was consecrated in 1856.

It was once more destroyed during WWII, but was fully restored under the direction of the Historic Buildings’ architect.

Saint-Sauveur-le-Vicomte is definitely worth the detour when in Cotentin, especially as it’s a stone’s throw from the Normandy Landing Beaches.