Normandy Invasion is part of a series of articles on the Battle of Normandy; it is a simplified presentation of one of the major pages of the 20th century's Western Europe History.

Most of us had family members who were involved in the conflict.

They fought, suffered or died regardless of their allegiance.

This brief and neutral presentation does not try in any way to glorify any of the tragic events that took place then, nor take sides.

Touring the Landing Beaches is before all a personal and very emotional journey.

It's the personal quest for a past that sometimes seems so close.

Many museums and memorials pay tribute to the men and women who were involved in the conflict.

1- The invasion of Poland by Hitler on 1 September 1939 triggered the start of WWII.

2- On September 3, 1939 at 11am the British government of Neville Chamberlain declared war on Germany.

Germany had indeed refused to answer the ultimatum asking for the withdrawal of its troops from Poland.

3- France declared war on Germany on the same day at 5pm.

4- The US entered WWII on December 8, 1941 after the Japanese surprise bombardment of their fleet anchored at Pearl Harbor.

6- Germany and the European Axis powers declared war to the US on Dec. 11.

7- The Atlantic and Pacific conflicts turned into WWII.

9- On the eve of the Battle of Normandy the German occupation of Western Europe - Atlantic Wall - spread from Norway to the river Bidasoa by the Franco-Spanish border at Hendaye.

Air plan for landings in June 1944

The Normandy Landings have remained among the most significant and tragic events of the 20th century.

Recorded in the World History, they have also been engraved in the memory of the French people, all the soldiers who returned from the fighting and all families who lost a loved one.

The Operation Overlord ended on on August 19, 1944 when the Germans retreated and crossed the Seine River.

Paris was liberated on August 25.

The Operation Overlord consisted of an airborne and amphibian assaults.

It was planned in successive phases that were preceded by overnight parachute and glider landings and intensive aerial and naval bombardments.

Operation Neptune, the code name of the naval operations or assault.

It was the first phase of the Operation Overlord.

Operation Neptune was mainly planned and executed by the Royal Navy placed under the overall command of Admiral Sir Bertram Ramsay.

Eisenhower wanted to take advantage of the full moon in order to drop men and equipment in the middle of the night.

The other decisive factor in choosing this date was that June 6 coincided with a high tide that would provide sufficient water depth to allow the landing crafts to navigate through the beach obstacles put in place by the Germans.

Normandy Invasion - D-Day, the first day of the landings

D-Day is the largest amphibious invasion in world history.

This represents a force of 185,000 men supported by 195,700 Royal Navy and Merchant Navy personnel , 6939 boats, 3500 gliders and 8090 airplanes which converged on five assaults beaches or sectors, 80km of littoral between stretching from Saint-Germain-de-Vareville to the west and Riva Bella-Ouistreham by the estuary of the river Orne to the east.

On this historic day the bombers dropped 11 912 tons of bombs on the coasts of Calvados and Manche!

Operation Cobra was the code name for the offensive planned by General Omar Bradley and initiated by the First United States Army on July 25, 1944, seven 7 weeks after the landing.

The purpose of this operation was to open a corridor in the middle of the German troops, positioned in the interior of Normandy between Saint-Lô and Coutances, in order to link with Brittany, while the bulk of the German defence was concentrated in Caen, a key city.

Aerial bombardment prepared the way to the south and southeast for the American allied troops under the command of Lieutenant General George S. Patton's U.S. Third Army.

Patton and his men managed to rapidly break through the German units that had remained inland.

These were indeed made of young and inexperienced soldiers, as the most experienced had been positioned in and around the most strategic areas of Caen and river Seine.

The Germans, however, fiercely defended their positions; the Allies re-seized Normandy at the price of deadly fighting.

They seized the cities one by one: Cherbourg then Saint-Lô (95% of the city had been wiped out)...

On July 26 the Allies entered Coutances, on July 27 the Cotentin Peninsula was isolated and on July 31 the last pockets of enemy resistance were destroyed.

The German counter-attack (Operation Luttich) launched on August 7 between the towns of Mortain and Avranches failed.

Their young and inexperienced soldiers were exhausted by long weeks of fighting.

The Allies took the city of Le Mans on August 8.

Normandy Invasion reached its climax at the battle of the Pocket of Falaise.

The German troops had indeed retreated in this area's natural depression or pocket; they thought this corridor would allow them to escape when necessary.

The allied troops who landed on the beaches headed for Falaise where they were reinforced by the troops of the Operation Cobra.

The Germans found themselves surrounded by the Allies in the Pocket of Falaise.

They fought desperately (10 000 Germans are thought to have died during this battle) and managed to hold until August 17, when they realized that they had lost and started to retreat.

The Allies managed to seal the Pocket of Falaise on August 21, enclosing 50 000 German soldiers who were made prisoners.

The Operation Cobra ended on August 19, the Normandy Invasion was at an end.

Paris was liberated on August 25 and on August 30 the last German troops had crossed the Seine and had retreated.

Christian Dior was born in Granville, a coastal town of Cotentin in Normandy where his childhood home is now a museum dedicated to his creations
Continue Reading

Eugene Boudin, a sailor's son who became one of the great Masters of Normandy seascapes and beach scenes and a precursor of Impressionism
Continue Reading

Maison de Monet in Giverny, the house and gardens the Impressionist Master transformed into a work of art and where he lived and painted for 43 years
Continue Reading 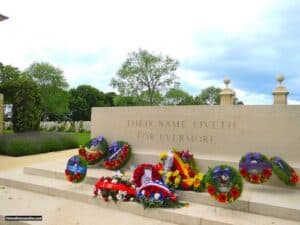 Beny-sur-mer Canadian War Cemetery, the burial-place of the soldiers who fell on Juno Beach and in the first days of the Battle of Normandy
Continue Reading
Translate »
Scroll to Top