La Pointe du Hoc was one of the strategic strong points of the Omaha sector.

The Germans had indeed concentrated their defenses on the promontory in anticipation of a ground assault from inland.

They also believed that the steep 30m high rocky promontory jutting out into the sea couldn't be accessed.

Finally, the elevated site gave them prime views over Utah and Omaha beaches.

They heavily fortified La Pointe du Hoc with bunkers interconnected by a network of tunnels and trenches and installed a battery of six cannons of 155mm with a range of nearly 23km of the site.

About 200 troops and machine-gun positions, placed all around the edge, guarded the battery. 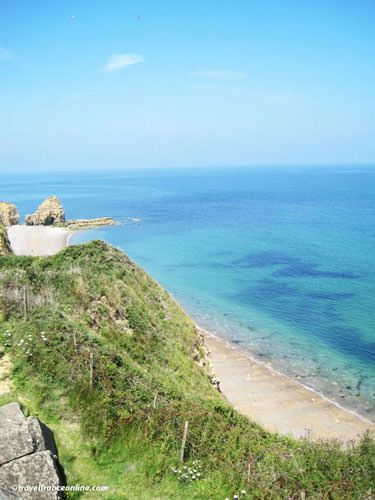 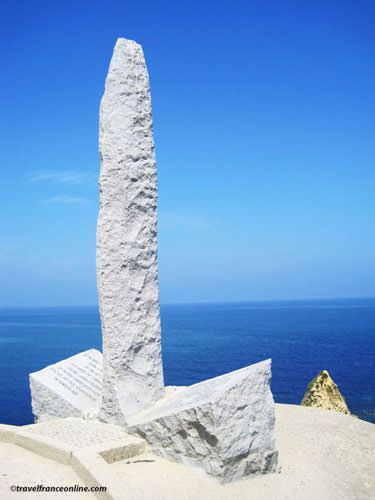 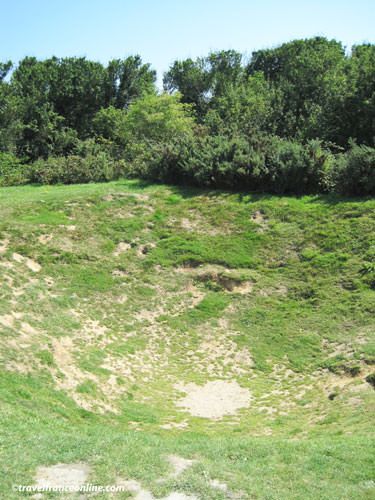 The US Army Rangers in charge of the assault

The assault of the promontory was assigned to 225 US Army Rangers under the command of Colonel James Earl Rudder.

The main bulk of the Rangers force was to stay offshore and land 30mn after Rudder and his men.

The Rangers' objective was to destroy the battery then move inland, cut the route that connected Grandcamp with Vierville, link up with the troops landed on Omaha and move towards Grandcamp and Maisy to link up with those landed on Utah.

Their landing was planned for 6.30am.

However, the terrible weather and the heavy German firing resulted in a disastrous landing with a high rate of casualty and the loss of most of their equipment.

The US Rangers therefore reached the bottom of the cliff 35mn behind schedule and with six ropes in all and for all!

The main Ranger force's orders was to land at 7.00am, if the first companies' landing had been successful. Their alternative orders were to deport their landing on to the western side of Omaha.

Colonel Rudder and his troops were on their own. The assault had began very badly and promised to be disastrous!

The heroic Rangers scaled the cliff while the Germans threw grenades at them or tried to cut the ropes through the tiny openings of the fort.

The Rangers, however, reached the top of the promontory five minutes after landing, with the assistance of the naval artillery.

To their surprise, and disappointment, they discovered that the guns were no longer in place. The Germans had moved them to a coastal path situated to the south of the battery to protect them from the bombardment.

The Rangers destroyed the guns with hand grenades despite the presence of the Germans a few steps away.

Colonel James Rudder sent a message, however, the long-awaited reinforcements had much difficulty to arrive.

The Germans troops initially disbanded, regrouped and counter-attacked five times, forcing his men to withdrew within the enemy lines.

The Rangers held the place alone for two days, with the support alone of the naval artillery, and tragically lost 70% of their strength.

The main Rangers force, that had landed on the western side of Omaha, reached La Pointe du Hoc on June 8th and relieved Colonel Rudder and his men.

Colonel Rudder and his rangers had reached their target, the operation had been a success despite the heavy casualties, however, it was two days behind schedule. 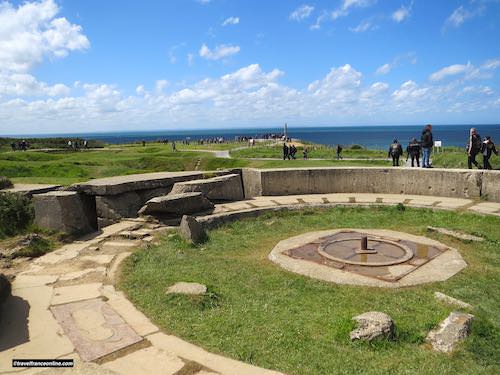 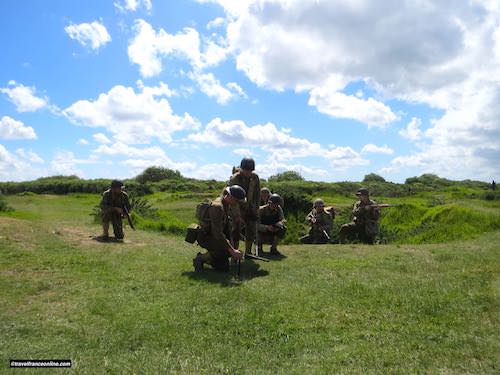 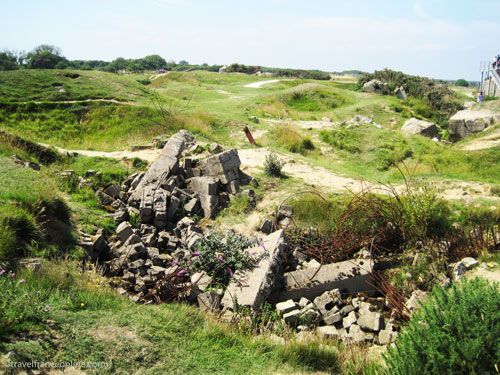 On January 11th 1979, France donated in perpetuity the 13-hectare battlefield to the United States of America.

American Battle Monuments Commission is officially in charge of the maintenance of La Pointe du Hoc and has been kept in its war state.

It is therefore easy to imagine the violence of the fighting when strolling among the bomb craters. One can only admire the courage, determination and dedication of these men, who fought to the death to defend the world against Nazism.

Tragically, 135 Rangers died on the cliffs of La Pointe du Hoc to protect their comrades who were landing on Utah and Omaha Beaches. 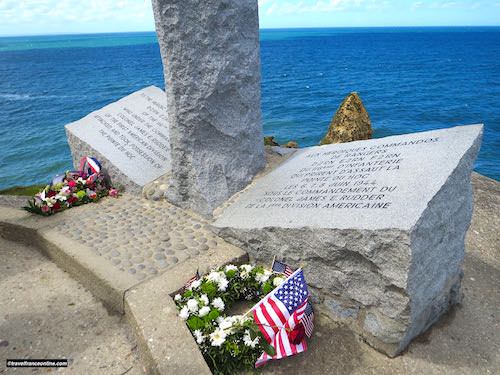 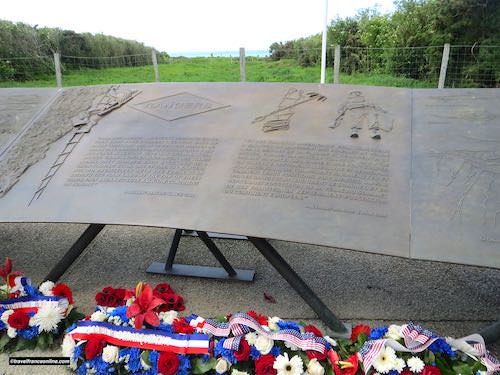 France erected the 2nd Rangers Battalion Monument to honour the memory of the US Rangers commanded by Colonel James Rudder.

The understated granite pylon was erected over a German control firing casemate. It is believed that bodies of German soldiers still lie under the ruins.

The monument stands out against the horizon. It soars towards the sky, as if committing to God the souls of those who died  during that assault - regardless of their allegiance... 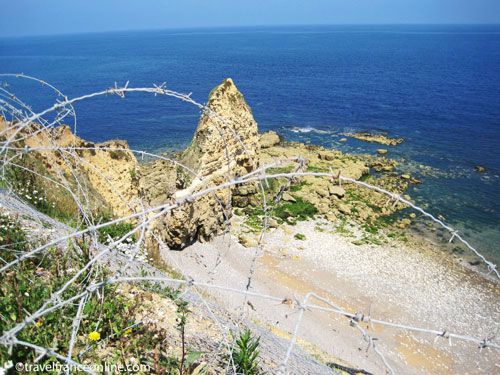 Pointe du Hoc and Beach where the assault started 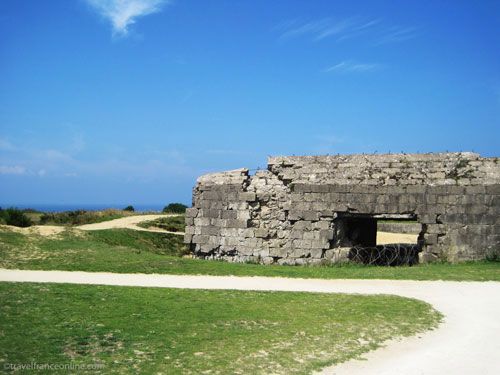 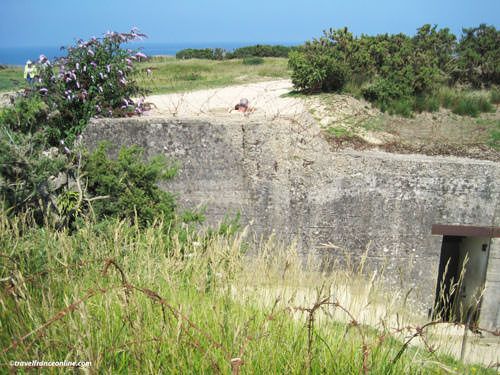