Omaha Beach stretched from Vierville-sur-Mer to the west to Sainte-Honorine-des-Pertes to the east. The 8km long strip of shore is slightly arched and stretches along a 30m high cliff.

Omaha Beach was divided into ten Sectors, code named (from west to east):

The D-Day assault on the western half of the beach was assigned to the untested US 29th Infantry Division, assisted of US Army Rangers.

The eastern half was assigned to battle-hardened 1st Infantry Division.

All together 34,000 men and 3,300 vehicles supported the US Navy and units of the Royal Navy and Free French Navy and US Coast Guard.

Infantry and combat engineers forces and tanks were scheduled to be part of the first wave of assault, in order to destroy the German coastal defences and prepare for the consecutive landing waves.

The Americans' objective was to link up with both Utah and Gold in order to establish a massive beachhead along the eastern shores of the Cotentin Peninsula. 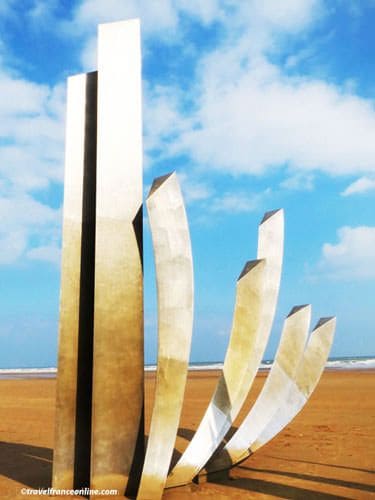 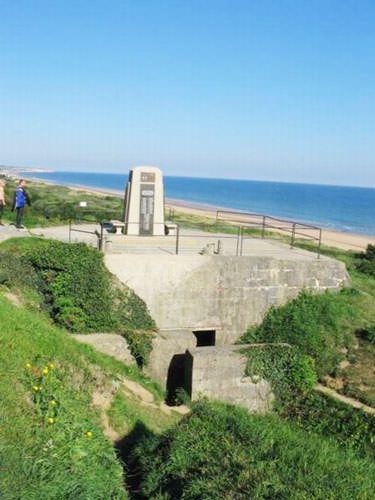 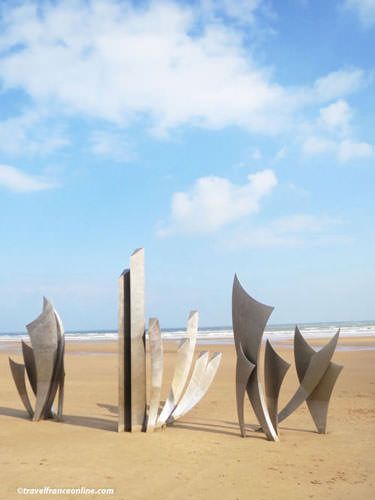 The German 352nd Infantry Division, mostly composed of very young soldiers, was in charge on the defence on Omaha Beach.

The beach was defended by a thick sea wall installed along the tide line and composed of metal barriers, stakes, ramps, tetrahedrons and barbed wire...

The massive blockage spread at the foot of the cliff.

Five paths or breaches linked the beach to the top. The German batteries were installed on the slopes.

The top of the cliff was defended by eight bunkers equipped with artillery, anti tank cannons, mortar pits, rocket launchers ramps and a considerable number of machine guns.

The fact that their defensc system was highly focused on the beach tends to suggest that the Germans had all intentions of stopping any invasion coming from the sea. 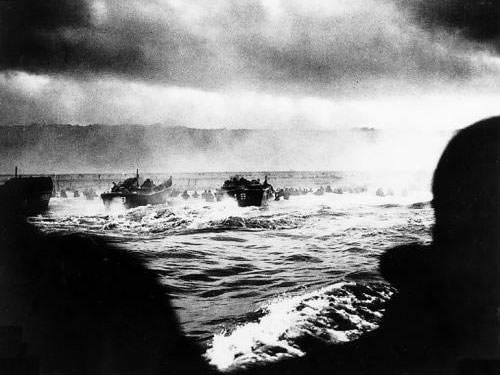 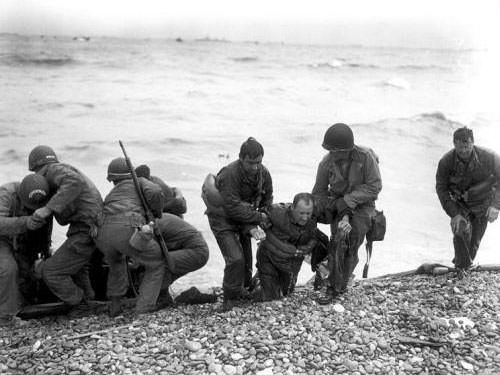 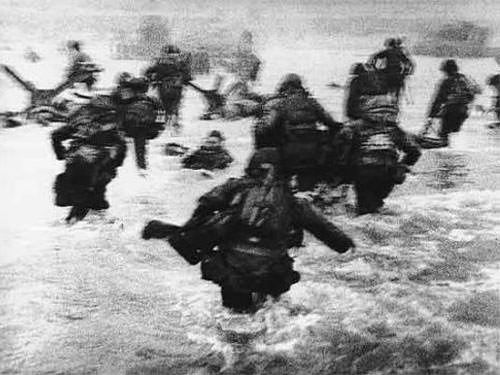 Omaha Beach, one of the deadliest D-Day assaults

The landing on Omaha Beach began at 6.30 am.

It was a total surprise to the Germans, who were only on exercise on the hills overlooking the beach.

However, the layout of the terrain played in their favour. They had orders to fire only once the Americans had reached the beach.

The horror of the fighting took place between Colleville-sur-mer, Saint-Laurent-de-la-mer and Vierville-sur-mer.

The storm that swept the coasts of Normandy generated rough seas and strong currents. These seriously impaired the navigation of the landing crafts, which were continually deported eastwards.

The men were seasick and scared. They helplessly watched their companions drowning and wondered if the same fate awaited them in the following minutes.

They struggled towards the beach under heavy fire from automatic weapons and artillery.

They had to disembark from the crafts some 100m off the beach because of the sandbars. They then had to make their way to the shore with water up to their shoulders.

Terribly slowed down by the weight of the wet equipment and clothes, they then had to climb the sea wall in order to reach the shore.

Once there, they found themselves under direct fire from the German defences positioned above them.

The disastrous weather conditions also impaired the landing of the amphibious tanks which were taken directly onto the beach as the rough seas stopped them to be launched offshore.

Twenty-seven out of the thirty-two tanks sank before the first men had a chance of escaping.

The combat engineers, who were part of the first assault wave, faced the same dramatic situation. They indeed landed off-target and only five out of the sixteen teams made it to their assigned zones.

Deprived of armour or infantry support, they had to clear the beach obstacles and the shore with minimum equipment and under direct enemy fire.

They suffered huge casualties, mostly generated by the Germans setting off the explosives they were trying to neutralise.

They also had to free the cliff five natural breaches. Once freed, these would open the four exit paths that would allow the hundreds of vehicles expected in the second assault wave to move inland.

However, this second assault wave landed around 7.am among total chaos.

Indeed, the beach obstacles couldn't been cleared off and many LCA's struck mines before the men had time to disembark. The number of casualties was as high as during the first assault wave.

The landing on Omaha Beach was a true scene of carnage, a living hell!

LCA's and  LCT's struck mines with the men and the tanks they were carrying and the wounded simply drowned.

Once more, their comrades were not allowed to rescue them, as their orders was to advance as quickly as possible. They had to leave them behind and many forced themselves to be oblivious to their comrades' cries of despair and pain.

So many of those who managed to reach the beach were an easy target. They fell to the ground and were stepped over by the survivors in their hurry to reach the foot of the hill. 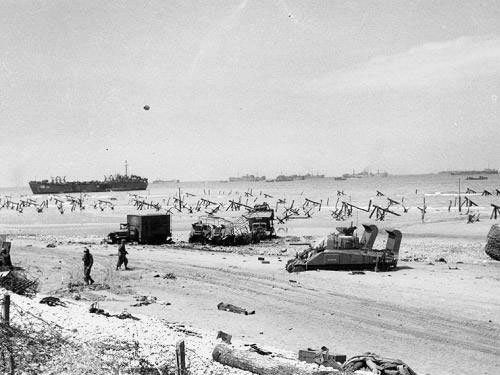 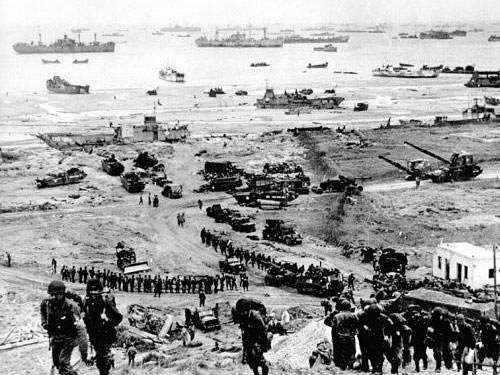 "The Dead and those who are going to die"

By 8.15am Colonel George A. Taylor, the Commander of the 16th Infantry Regiment who had just landed had indeed encouraged his troops by declaring:

"Two kinds of people are staying on this beach, the dead and those who are going to die - now let's get the hell out of here!"

Two breaches were eventually opened at 10am!

At 10.30am, 3000 dead and wounded lay strewn on the beach along with the drowned vehicles, destroyed boats and tanks. Only six bulldozers sent as reinforcements reached the shore.

Omaha Beach was a scene of apocalypse, but the breakthrough had been finally achieved.

By the early afternoon, the Germans reported that the Allied assault had been repelled.

They, however, asked for reinforcement troops, as their number of casualties were increasing quickly. Their request could not be met because the reserve regiments had been sent to counterattack the landing on Gold Beach.

The dynamics of the battle were changing!

Despite the carnage and the exceedingly high number of casualties, Omaha Beach was under American control by 7pm on June 6.

St-Laurent-sur-mer was still under German occupation.

However, the bridgehead was 3km deep and 9km long and the link with the British troops, who had landed on Gold, established.

The Americans were thus able to move towards Isigny-sur-Mer the next day and link up with their troops who had landed on Utah Beach. 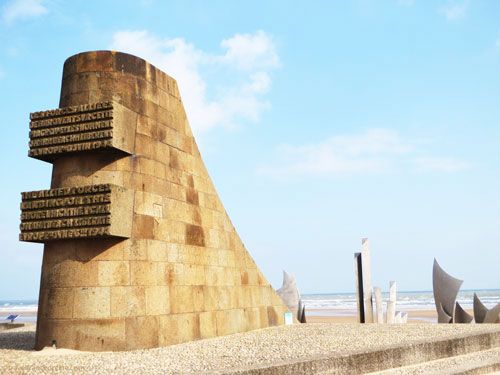