The Cimetiere de Passy is located on the southwest side of the Place du Trocadéro.

It's right next to the Palais de Chaillot, yet few tourists take the time to visit it.

This beautiful cemetery contains indeed the tombs, mausoleums and chapels of many personalities who enjoyed international fame in their lifetime.

But first a little history.

The Cimetiere de Passy is one of the great Parisian cemeteries (Montparnasse, Père-Lachaise and Montmartre) created in the late 19th century.

The industrial revolution and the enlargement of Paris in 1860 resulted in an unprecedented increase in the population.

Many peripheral villages were indeed integrated to the city.

The parish cemeteries therefore became located within the city's boundaries.

They were soon disaffected because of major sanitation issues.

The Cimetiere de Passy replaced in 1820 the cemetery of Notre-Dame-de-Passy Church.

It was enlarged several times until 1860, however, it is still the smallest of the 'grands cimetières Parisiens'. 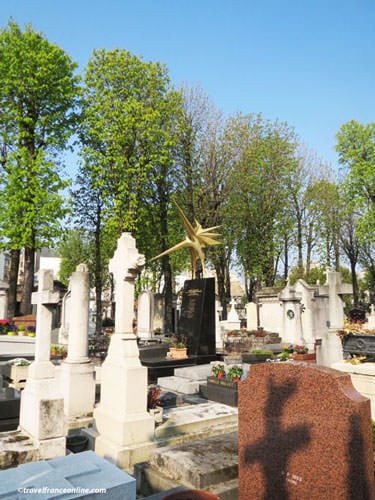 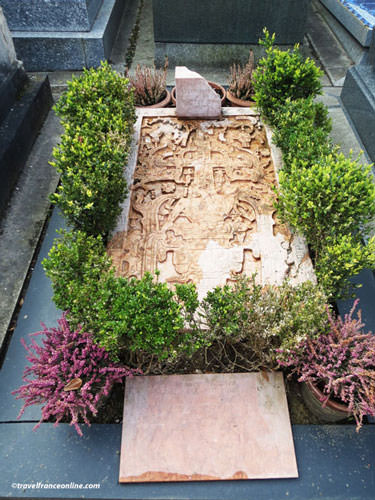 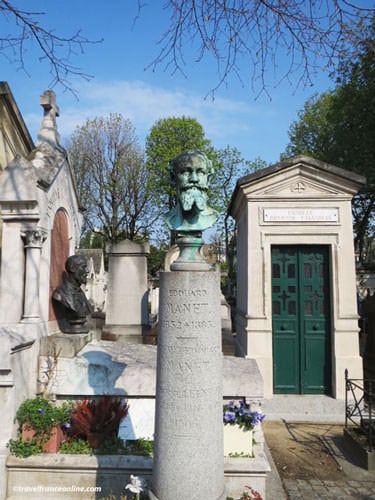 Passy has always been known for its elegant mansions and parks and is one of the most aristocratic neighborhoods of Paris.

Number of prestigious people, old aristocratic families, tycoons of finance, captains of industry, politicians but also many personalities of the art world are buried there.

Some impressive or extravagant tombs, chapels, crypts and mausoleums seem to be to the image of the mansions occupied by their wealthy inhabitants, when they were alive.

They turn the Cimetiere de Passy into a superb illustration of funerary art!

Shady paths bordered by 290 trees of 15 different species (including magnificent century old chestnuts) delineate the sections of the cemetery. 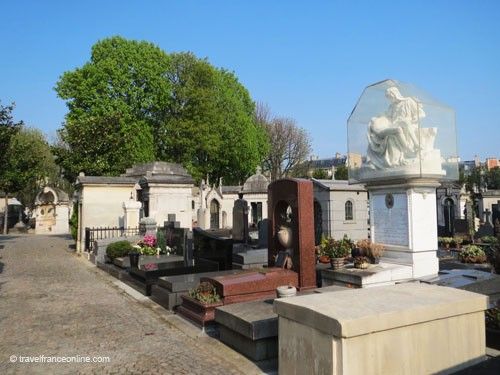 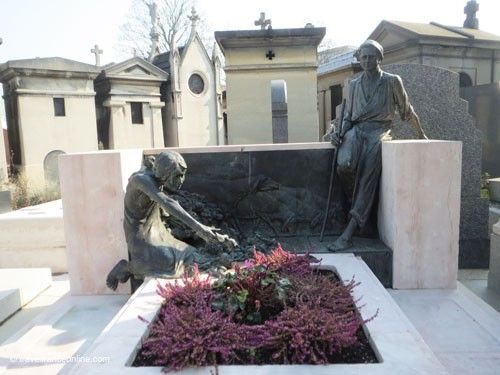 You'll have no trouble spotting the Cimetiere de Passy on Place du Trocadéro.

A monumental sculptural group flanks its perimeter wall (we used it for our header!):


Paul Landowski, a pupil of the sculptor Barrias (who is buried in the cemetery), sculpted it in 1956.

Landowski obtained worldwide fame in 1931 for his Christ the Redeemer statue in Rio de Janeiro in  Brazil.

Parisians know him also for his statue of Sainte-Geneviève (the patron saint of Paris) that stands on the Pont de la Tournelle.

This bridge connects the left bank to the Ile St-Louis. 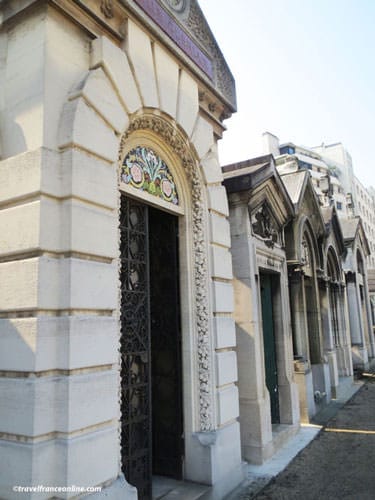 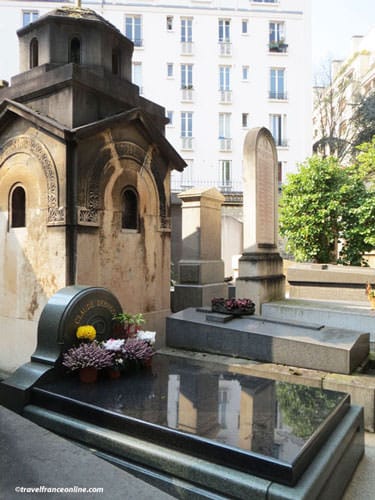 A wealth of funerary art

The architect René built the gate in 1934 and the sculptor Janthial created the three low reliefs that adorn the pavilion.

Step in the cemetery and stroll along the shady paths and meet those who once were all mighty and alive!

Some are traditional, others contemporary.

Many are quite disconcerting!

A surprising statue of Joan of Arc, wearing very little, seems to be greeting the visitors as she is located by the entrance.

You’ll also come across a little angel, a symbol of purity and rebirth, who stands next to an ugly skull.

You'll also immediately spot a stylized gilt metal bird that seems to get ready to soar into the sky.

You'll also come across a white marble replica of the Pietã by Michelangelo (located in St. Peter's Church).

It adorns the grave of Baron Pierre de Perenyi.

Even more surprising, this statue is enclosed in a Perspex window that protects it from the elements!

One of the Cimetiere de Passy's most imposing chapels is that of Marie Bashkirtseff.

It is indeed massive and dominates all the other funeral monuments. 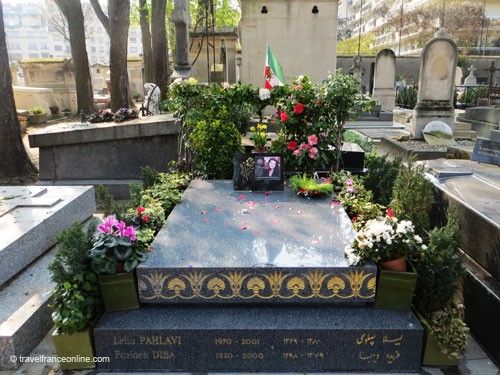 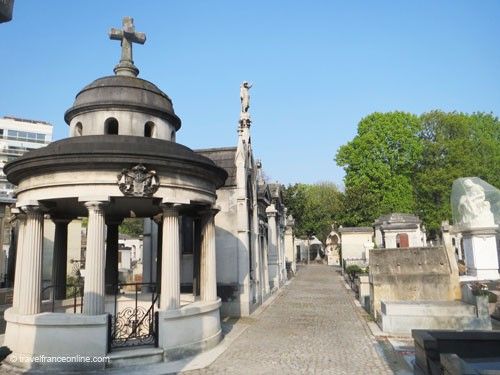 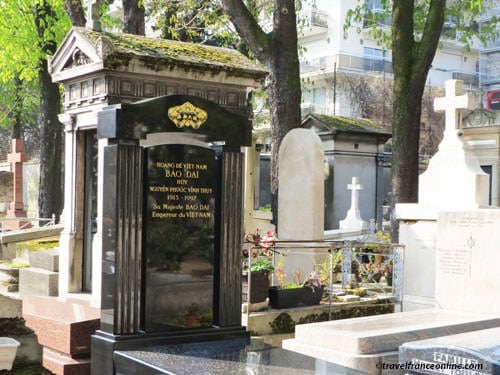 Who is buried in the Cimetiere de Passy?

The list is very long and it's impossible to mention all the names.

So here's a short list of the most famous (in French and in the world!).

You might not know Ernest Cognac-Jay and his wife Marie-Louise, but you'll undoubtedly know the name of the department store they founded, La Samaritaine!

You will probably recognize the names of the aircraft industrialist Marcel Dassault and the businessman Francis Bouygues.

Famous men of letters and journalists are also buried in the Cimetiere de Passy.

Among the most famous are the editor Arthème Fayard, the writers Maurice Genevoix, Jean Giraudoux, Tristan Bernard and Gérard de Villiers, the author of the successful series S.A.S.

If you are interested in painting you’ll look for the tomb of the painter Edouard Manet.

He is buried with his brother Eugène and his sister-in-law the painter Berthe Morisot.

If you are a fan of music, you’ll look for the graves of the composers Claude Debussy, Gabriel Fauré and Jacques Ibert.

If you prefer sculpture, you‘ll be interested in finding the tomb of Emmanuel Frémiet.

He sculpted the statue of the Archangel Michael on Mont St-Michel, the equestrian statue of Dugesclin in the medieval city of Dinan, the rhinoceros in front of the Orsay Museum and the statue of Jeanne d'Arc on Place des Pyramides in Paris.

He sculpted La Défense of Paris that marks the centre of La Défense, the business district of Paris.

You'll also find many personalities from the entertainment world.

Among these are the comedians Jean-Louis Barrault and his wife Madeleine Renault.

There is also the grave of Fernandel, one of the most popular French comedians of all times.

You'll find the grave of Gabrielle Réjane, who has a menu named after her in Le Train Bleu - Buffet de la Gare de Lyon, one of her favourite restaurants!

You might also recognize the name of composer Loulou Gasté, who was the husband of the singer Line Renaud.

The Givenchy and Guerlain indeed have their family vaults in the Cimetiere de Passy!

He died in 1936 and his understated grave slowly falls into oblivion in the absence of descendants.

Number of French politicians such as Sadi Carnot (who was President of the Republic from 1887 to 1894) have their family vault in the Cimetiere de Passy.

His ashes were transferred to the Pantheon.

The newspaper magnate Robert Hersant and the Renault family, the industrialists and founders of the automobile brand of the same name, also have their family vaults in Passy.

The aviators Dieudonné Costes and Maurice Bellonte have unusual tombstones.

One is decorated with a world map, the other with an Art Deco low-relief.

That of the vulcanologist Haroun Tazieff is covered with a sculpted tombstone.

Many foreign personalities such Bao Dai, (1913-1997) the last emperor of Vietnam, are also buried in Passy.

So is Antonio Blanco Guzman, who was the president of Venezuela between 1870 and 1877.

And Princess Brassova, (1880-1952) the wife of the Grand Duke Mikhail Romanov, the brother of Tsar Nicolas II.

You'll have no difficulty finding the tomb of Princess Leila Pahlavi, the daughter of the Shah of Iran.

It is indeed always crumbling under flowers.

James Gordon Bennett Jr. the owner of the New York Herald and founder of the International Herald Tribune, and the American actress Pearl White, are among the foreign personalities who were buried in the Cimetiere de Passy.

Many more, famous or not, were buried in the cemetery.

Some of their graves are understated or abandoned, others finely decorated, all very touching!