The Pantheon is the burial place of the Great Men (and women) of the French Nation.

The imposing monument is located at the top of the Montagne Sainte-Geneviève, on the edge of the Latin Quarter.

This area corresponds to the new town the Romans developed some 2000 years ago when the Ile de la Cité became too small for an ever-growing population.

In 507AD, King Clovis and his wife Clotilde founded an abbey on the site of the Roman forum and dedicated it to Geneviève, the patron saint of Paris.

In 1744, King Louis XV was convinced that his prayers to Sainte-Geneviève had helped him recover from a long illness, and wanted to give thanks to the holy woman.

He therefore commissioned the architect Soufflot with the construction of a new Eglise Sainte-Geneviève for the abbey.

The first stone was eventually laid in 1764!

Soufflot died in 1780, but his assistant Rondelet took over the construction work. The church was completed in 1790.

Sainte-Geneviève Church, as the Pantheon was initially known, was very different from today. It boasted two towers, three entrances and a dome with 40 windows.

Temple of the Republic, Pantheon and Church!

It luckily escaped demolition during the French Revolution.

A decree from 1791 indeed stated that the church would become a Pantheon or Temple of the Republic dedicated to receive the ashes of the Great Men of the Nation.

The architect Quatremère was commissioned with the alteration work.

He reduced the height of the towers and removed the cross that capped the dome. He also closed most of its openings and changed the pediment.

In 1806 Napoleon returned the Pantheon to its religious purpose, changed the pediment and re-placed the cross.

In 1830 Louis-Philippe decided that, after all, Sainte-Geneviève Church should be a Pantheon. He therefore built a new pediment and stripped the building from any religious connotation.

In 1850, Louis-Napoleon Bonaparte re-converted it into a church and built a new pediment. He re-placed the Cross on the top of the dome.

This cross has never been removed since, but the building was returned to secular use in 1885 and converted into a Pantheon.

This is also where you'll find a replica of Foucault's pendulum. 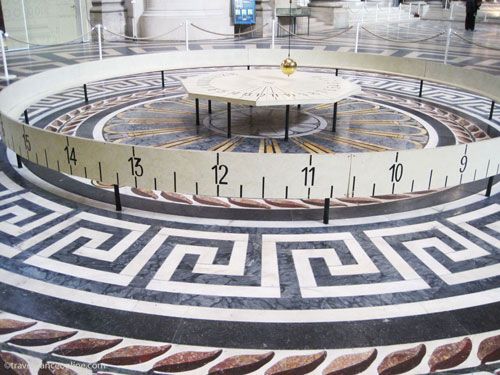 The Great Men of the Nation

The crypt consists of four main vaults accessed by a large vestibule that shelters the graves and statues of the philosophers Voltaire and Jean-Jacques Rousseau.

On November 11, 1920, the heart of Léon Gambetta, the founder of the Third Republic, was placed in an urn placed by the entrance.

The west vault, the longest and largest, is divided in two corridors.

The right hand branch contains the burial chambers of 41 major figures of the Empire.

One of them is the jurist François Denis Tronchet (1726-1806) who wrote the Civil Code, or Code Napoleon, that defines the principles of French common law. Tronchet was the first Senator of the Empire to be buried in the Pantheon.

Victor Hugo and Emile Zola graves are in the same vault, in the left branch. Alexandre Dumas senior's grave was placed in the same burial chamber in 2002. 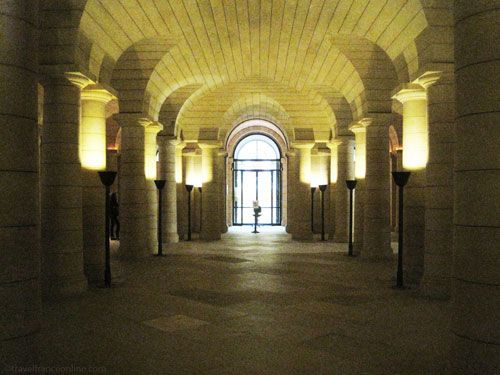 Who else is buried in the Pantheon's Crypt?

It is impossible to name them all, but here's a short list of names you might recognize.

The politician Jean Jaurès was considered the father of modern socialism.

Marie François Sadi Carnot was the fourth president of the Third French Republic from 1887 until his assassination in 1894.

Adolphe-Sylvestre Félix Eboué was the first overseas French resistant and Governor of Africa.

Victor Schoelcher dedicated his life to the abolition of slavery.

Jean Moulin was a major hero of the French Resistance; the Germans executed him during WWII.

The author André Malraux became Minister of Culture; we owe him the classification of the Marais as a 'protected area'.

Jean Monnet was one of the founding members of the European Community.

René Cassin was the author of the Universal Declaration of Human Rights adopted by the UN in 1948.

The ashes of the Nobel Prices Pierre and Marie Curie were placed together.

You will also find the tomb of the explorer Louis-Antoine de Bougainville who brought back a superb bush named after him!

Louis Braille was the inventor of the alphabet for the blind.

The mathematician Gaspard Monge was a co-founder of the Ecole Polytechnique, and Jacques-Germain Soufflot the architect of the Pantheon.

The body of François-Dominique Toussaint Louverture is not in the crypt; a commemorative slab, however, pays tribute to the leader of the Haitian Revolution.

However, some Great Men of the Nation were also disinterred from the Pantheon!

This was the case for the lawyer and member of the revolutionary Legislative Assembly Louis Michel le Peletier de Saint-Fargeau who voted Louis XVI's execution.

Le Peletier was buried in the Pantheon in 1793; his family, however, reclaimed his body in 1795.

Marat, the journalist and politician who was murdered in his bathtub, was buried in the Pantheon in 1793.

However, he fell in disgrace in the months that followed; his ashes were disinterred in 1795.

Great Women of the Nation

An official ceremony took place on May 27, 2015 to honour the memory of two women, who were the first to be awarded the Grand Cross of the Legion of Honour for their heroic deeds during WWII.

The resistant Geneviève de Gaulle-Anthonioz, General de Gaulle's niece, was deported to Ravensbruck camp in 1944; she died in 2002.

The resistant and anthropologist Germaine Tillion, died in 2008.

On request of their families, their remains were not buried in the Pantheon, but in their family vaults.

The Rue Soufflot originates at the Boulevard Saint-Michel, a spot that boasts superb views of the imposing building.

It ends on Place du Pantheon, a square framed by two identical buildings with convex facades.

Soufflot built the south building that accommodates the Faculty of Law.

The architect Hittorf built the city hall of the 5th District on the opposite side during the 19th century.

The Bibliothèque Sainte-Geneviève (library) was built in 1850 in order to delineate the north side of the square.

The building looks quite austere, but it contains a priceless collection of manuscripts and old prints!

Tourist sites near the Pantheon

Luxembourg palace and gardens, St-Etienne-du-Mont Church with the shrine containing the remains of Ste-Geneviève