It is nestled at the confluence of the Aveyron and Alzou, in the heart of the historical region of Rouergue.

Villefranche de Rouergue is listed as Grand Site of Midi-Pyrénées, City of Art and History and Bastide of Rouergue.

Western Aveyron is a land of limestone, sandstone and shale plateaus cut by the deep canyons the river Aveyron carved.

It is known as the Land of Bastides.

These picturesque walled cities were built along the pilgrimage road to Santiago de Compostela.

Exempt from custom duties and taxes they were therefore essentially devoted to trade.

In 1099, the Count of Toulouse Raymond IV of Saint-Gilles founded a town on the left bank of the river.

However, this new town had no church!

The inhabitants therefore had to attend services in Saint-Jean D'aigremont, on the right bank of the Aveyron.

However, the demographic expansion and political instability of the 13th century encouraged the Counts of Toulouse to reorganize the administration of their fiefdom in order to boost the local economy.

As a result, they founded several villes franches - free cities and granted them privileges and custom duties exemption or franchises - in order to attract new settlers.

He founded Villefranche de Rouergue in order to transfer the administration of the County of Rouergue from Najac and therefore establish his authority.

Villa Franca was thus founded in the 1250s on the right bank of the Aveyron and was granted its first charter regulating commercial customs.

This long list of franchises stimulated local trade and economy, while its ideal location turned it into the region's trading platform.

Villefranche de Rouergue was indeed situated at the edge of the fertile Causse de Villeneuve and Plateau du Segala, but also in the vicinity of silver, copper, lead, tin and iron mines.

Finally, it also stood at the crossroads of ancient roads and along the pilgrimage road to Santiago de Compostela.

Villefranche de Rouergue's commercial success was such that during the 15th century King Charles V granted the town the right to mint.

Sadly, the plague of 1628 decimated a third of the population and therefore put a brake on the city expansion.

Followed the Wars of Religion of the 16th century.

The slow economic recovery was halted in December 1775, when a massive earthquake destroyed over 600 homes as the city sit on a fault line!

Once again great efforts were put in place in order to revive the economy.

In 1779, Villefranche de Rouergue was therefore elevated to the status of capital of the newly created province Haute-Guyenne.

However, the positive effects of this expansion were unfortunately short lived.

The bastide indeed lost its status in 1790, during the French Revolution, when the country's territorial administration was redefined.

Rodez became the préfecture of the newly created department of Aveyron and Villefranche de Rouergue a sous-préfecture.

The city slowly sank into oblivion.

However, a tragic episode that took place during the German occupation, brought the city to public attention.

Indeed, on September 17, 1943, Croatian soldiers, who had been enrolled against their will into a pioneer battalion of the 13th SS division, rebelled.

They captured and executed the German officers in charge of the town and liberate it.

However, their success was short lived as the Germans re-captured the city within 24 hours after a deadly street fighting.

Most Croatian survivors were executed and buried in a place since known as Champ des Martyrs Croates.

Only two of the alleged leaders, Eduard Matutinović and Božo Jelinek, managed to escape.

The latter was promoted to the rank of officer and awarded the French Legion of Honour.

A major street of Villefrance de Rouergue was also re-named Avenue des Croates in order to commemorate the bravery of these soldiers.

The ramparts and fortified gates of Villefranche de Rouergue were demolished in the 18th and 19th centuries.

Les Promenades, a series of shaded walks, today replace them.

However, the old bastide has retained most of its medieval architectural heritage, and boasts a wealth of historical buildings.

The Pont des Consuls or Vieux Pont was built around 1331 in order to replace a ford.

Its two towers served as toll houses in order to collect entry fees.

Such was their importance that they were added to the city's coat of arms!

A 3rd tower marked the city entrance and served as a prison.

The three towers were demolished in the late 18th century.

Most houses that surround Place Notre-Dame, the town's central market square, were rebuilt after the fire of 1497.

The Maison du President Raynal boasts a stunning facade, and the courtyard of Maison Dardennes a superb Renaissance stair-tower with carved figures.

Construction of the Collegiate began in 1252 and lasted three centuries!

The 58m high bell-tower was completed in 1589 and has a special and unique feature.

The arched porch is indeed open on four sides and therefore spans the street.

The church has an unusual story!

All through the Middle-Ages, Rodez and Villefranche de Rouergue were indeed rival cities.

Each city therefore wanted to build the most prestigious cathedral.

However, the Hundred Years War and the lack of funds limited the ambitions of the inhabitants of Villefranche de Rouergue!

They indeed had to settle for a more modest edifice; the size of the foundations suggests that the original plans were drawn for a much larger building.

Notre-Dame is therefore completely out of proportion!

This doesn't deter it though from being outstanding.

The portal with an openwork gable is indeed stunning.

The interior is equally impressive, both for its size and architectural features.

The Chapelle des Pénitents Noirs is located on the Promenade du Languedoc, one of the walks developed on the site of the former ramparts.

It was erected in the early 17th century after the deadly episode of the Wars of Religious.

The chapel boasts an unusual turret and contains a splendid 18th century gilded altarpiece adorned with scenes of the Passion.

The Halle au Gras is located at the rear of the church as it was built (1888) on the site of the cemetery.

This cemetery was indeed decommissioned and transferred outside the city boundaries in the mid-19th century.

The only reminder of the cemetery is the Chapelle Sainte-Barbe which was built in 1711 against the rampart.

The covered market is of course open on market days and it also accommodates local fairs and events.

The Neo-Gothic Chapelle Saint Emilie de Rodat was built in the 1950s on the site of the former Couvent des Franciscains.

All that is left of the 13th century convent demolished at the French Revolution, is the Chapter House.

This building has become the chapel's crypt.

Dom Odilo Hitier commissioned the architect Bosser with the construction of the chapel in order to commemorate the achievement of Emilie de Rodat.

This charitable association was essentially dedicated to the education of young orphans. 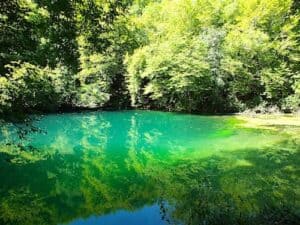