Legend has it that the holy man saved Paris from a dragon, changed the water of the Seine into wine and converted the pagans to Christianity...

St. Marcel is one of the three patron saints of Paris (with Ste-Geneviève and St-Denis.)

The area where it today stands, was then deserted and quite at a distance from Lutetia (Roman Paris) and the amphitheatre Arènes de Lutèce.

St. Marcel was buried in the vast Gallo-Roman necropolis located along the Roman road that linked Paris to the city of Melun farther south.

The small oratory erected on the saint's grave became a site of pilgrimage.

The first Christian community of Paris soon settled nearby, by the ford that spanned the small river Bièvre.

A chapel replaced the old oratory in the 6th century AD.

The holy man's relics were transferred to safety behind the walls of the fortified Ile de la Cité during the 9th century Norman invasions.

This largely contributed to propagate the cult of St. Marcel and make him one of the patron saints of the city.

The chapel was rebuilt during the 10th century in order to serve the increasing population. 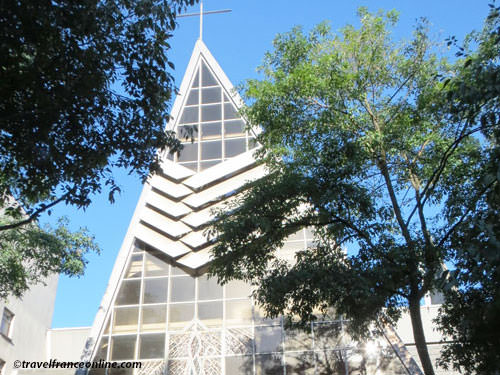 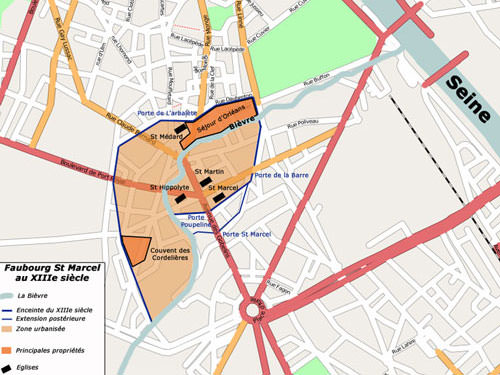 Map of St. Marcel district during the 13th century

In 1158, it became a collegiate church in 1158 placed under the jurisdiction of the almighty abbey of Sainte-Geneviève.

Villagers from the south-east bank of the Seine worshiped in St. Marcel until the French Revolution.

A rampart and deep ditches encompassed the Church of St. Marcel during the Hundred Years War as the village was well outside the city walls.

The physiognomy of the district, however, started to evolve during the 12th century.

Country houses and prestigious convents indeed appeared on the banks of the Bièvre.

However, the main transformations occurred when the canons of St. Marcel relieved the villagers from their duties and King Philippe le Bel waived royal taxes and elevated the village to the status of independent community known as Faubourg St. Marcel.

Tax exemption and the proximity of the Bièvre triggered also the appearance of butchers and related trades such as tanners, shoemakers and dyers.

A brewery, inns and cabarets soon opened by the workshops in order to cater for this new workforce.

Finally, the foundation of the Manufacture des Gobelins triggered once more the development of the district.

It indeed stood near the saltpeter factory, today replaced by the Salpêtrière Hospital.

The church was pulled down in 1806, and the working-class Faubourg St. Marcel integrated to Paris in 1860.

The opening of Boulevards Arago and St. Marcel led to the destruction of most of the medieval district, with the exception of Rue des Gobelins and Rue de la Reine-Blanche.

The first stone of St Marcel de la Salpetriere was laid in 1856 at no80 Boulevard de l’Hôpital.

The Neo-Gothic St Marcel de la Salpetriere church remained open until 1962, when its advanced state of disrepair led to its demolition.

The new church was inaugurated in 1966 and consecrated a year later as St. Marcel Church.

Its contemporary architecture and use of concrete and glass may surprise at first, but they are a perfect illustration of the style of the 1960's.

The church is obviously the custodian the holy man's relics.