The Manufacture des Gobelins is prestigious tapestry factory worldwide renowned for the quality of its productions.

In the 1440s, the Flemish dyer Jean Gobelin opened a tapestry workshop on the bank of the Bièvre, a small river that then traversed the marshy Rive Droite.

Jean Gobelin's exceptional expertise in dyeing, and especially in setting the scarlet colour, brought him fame and wealth.

His business expanded so well that the Bièvre soon became known as the Rivière des Gobelins.

By the early 17th century, the Gobelins were a well-known and respectable Parisian upper-class family.

Most members had indeed engaged in religious or financial careers, leaving the dyeing business to another branch of the family. 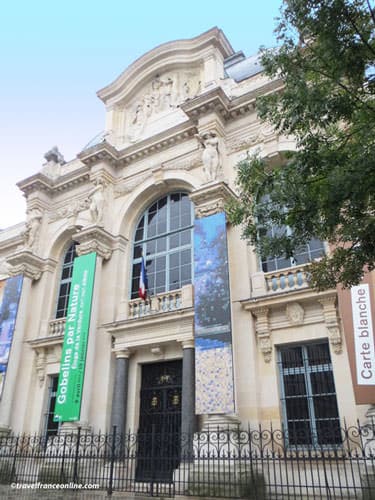 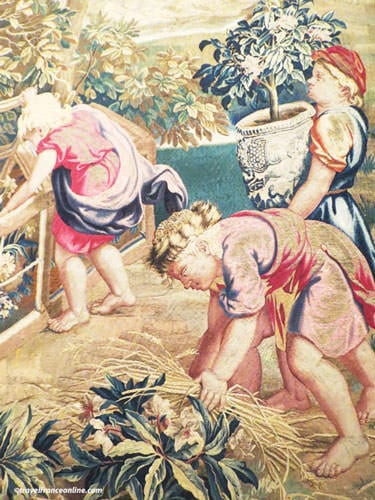 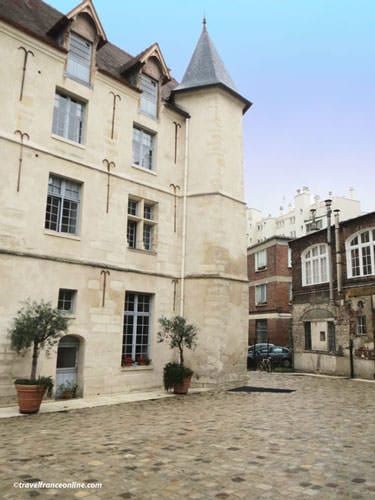 The Canaye manufactured the first Gobelins tapestries and brought the reputation of the factory to new heights.

In 1666, the Lord High Treasurer Colbert purchased the Gobelins in order to found the Manufacture Royale des Meubles et Tapis de la Couronne - Royal Manufacture of furniture of the Crown.

The prestigious establishment hired the most talented craftsmen of the time, such as the renowned Flemish tapestry-maker Jean Liansen.

New buildings were erected and the old ones renovated.

The newly founded factory produced tapestries based on canvasses created by Rubens and Charles le Brun, Mignard, Desportes, Jouvenet, De Troy and Oudry among others.

From then on, the Manufacture des Gobelins exclusively produced the splendid tapestries that will contribute to its worldwide reputation.

The factory escaped demolition during the French Revolution.

However, all the tapestries adorned with the royal emblem Fleur-de-Lys were burnt! 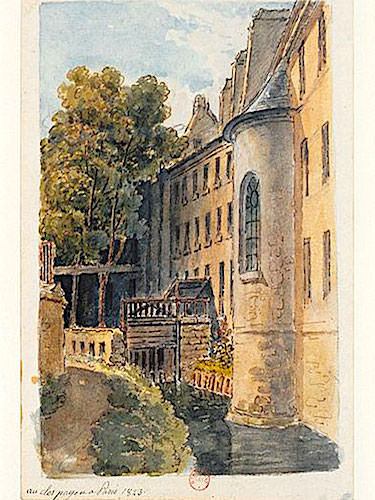 Les Gobelins chapel in 1823 on the bank of the Bievre 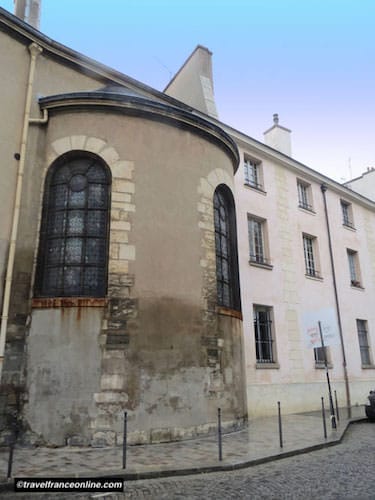 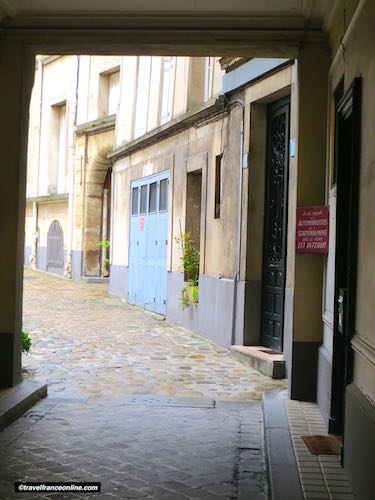 This manufacture, founded by Henri I, specialized in knotted stitch.

The chemist Chevreul discovered the way of stabilizing thousands of dyes and therefore gave new impetus to the establishment.

From then on, the manufacture essentially weaved for kings, presidents or emperors!

The Manufacture de Beauvais (founded in 1664) was transferred to the Gobelins in 1989.

The Manufacture des Gobelins founded a dyeing and weaving school, and a museum chronicling the Gobelins' history and the evolution of tapestry. 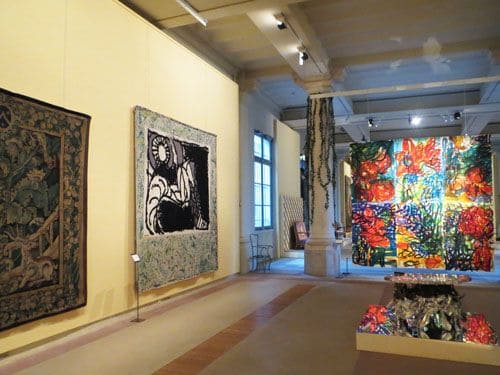 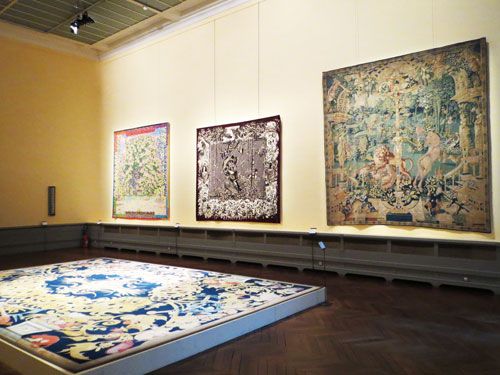 They produce an extensive number of tapestries inspired by the masterpieces of the most prominent artists of the 20th century such as Chagall, Picasso, Matisse, Miro and Jean Lurçat among others.

Different eras, different styles, but expertise and quality are the same as before!

It also lends them some of its 200,000 pieces of furniture, tapestries, ceramics, objets d’art and bronze dating from the 17th century to the present day.

It is responsible for the conservation and maintenance of these objects, and is attached to the Department of Arts of the French Ministry of Culture. 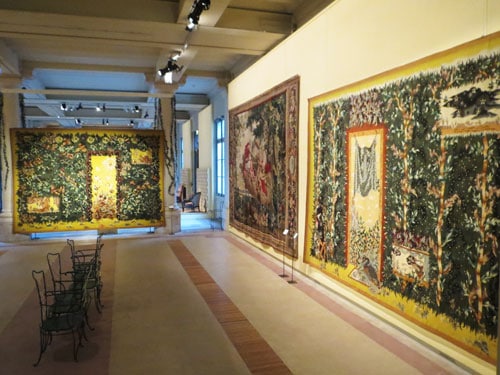 Lurcat's tapestries in the Gobelins in Paris 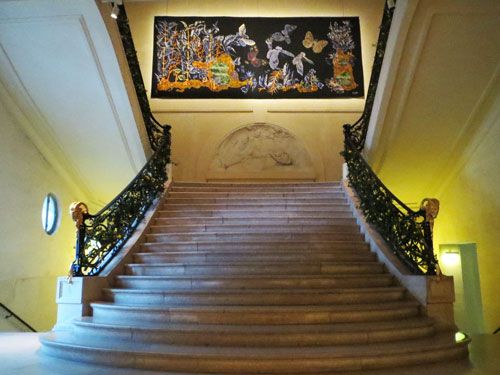 So important was the influence of the Manufacture des Gobelins that the entire 13th district is still often referred to as Quartier des Gobelins!

The Enclos des Gobelins, as the original factory compound was known, is mostly listed.

In 1912, the architect Jean-Camille Formigé designed the imposing building at no42 Avenue des Gobelins, the main entrance to the factory and outbuildings.

The architect Gabriel built the Chapelle des Gobelins during the 18th century.

The edifice has now been converted into an exhibition hall and overlooks Rue Berbier-du-Metz.

The street runs above the river Bièvre which was channeled underground in 1910.

The Gothic houses at no17 and no19 were built around 1500, and belonged to the Gobelins family until the 17th century.

They were later converted into a shop and even a tannery.

Fortunately, they've since been listed and have undergone complete restoration.

They indeed are among the oldest houses in Paris!

The most complete medieval building is the Hôtel de la Reine-Blanche.

It's main entrance is on Rue Gustave Geffroy, but it is also connected to Rue des Gobelins via a series of inner courtyards.

The origin of its name is uncertain.

However, it is believed that it comes from a much older mansion built around 1300 for Blanche, the daughter of King St-Louis.

This original building was replaced by the current two-storey mansion in 1500.

The Hôtel de la Reine-Blanche is a listed Historical building.

It is also one of the few remaining buildings left in Paris that still combine living quarters and workshops.