The Arenes de Lutece are the oldest Roman monument in Paris.

They are located in the 5eme arrondissement, the district with the highest concentration of Roman vestiges.

Some 20 centuries ago, the Romans built a new town on the Rive Gauche, along the road that led to Rome.

Antic Paris or Lutetia - Lutece, on the Ile de la Cité, had indeed become too small for an expanding population.

The settlement of the Rive Gauche was, however, deserted and wrecked during the barbarian invasions of 285AD.

A small community reappeared though in the 5th century with the foundation of Sainte-Geneviève Abbey.

It was once more abandoned when the Normans besieged Paris in the late 9th century.

The unprecedented demographic expansion of the 11th century, then the foundation of the Paris University, relaunched the development of the district.

As a result, the 5th district remained one of the most populated of Paris until the 1860's.

Fortunately, some major Roman vestiges, such as the Arenes de Lutece and Baths of Cluny, escaped destruction. 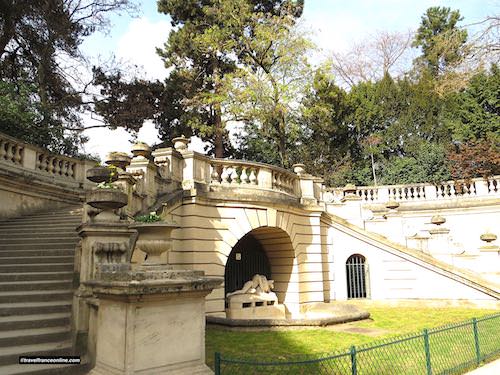 Steps leading from Square Capitan to the Arenes de Lutece 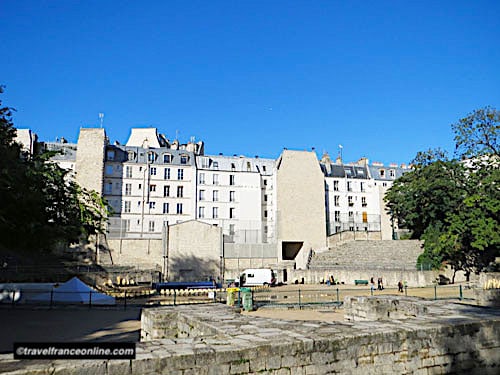 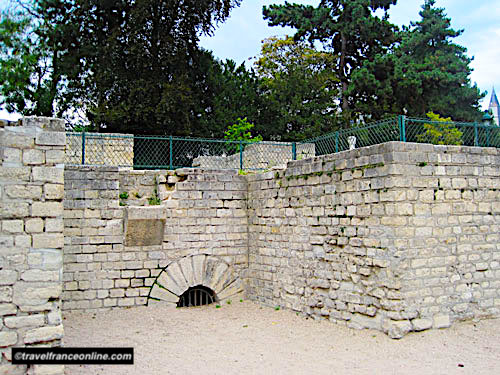 The 10,000-seat semi-circular amphitheatre was built around 200AD.

Located on the eastern outskirts of Mons Lucotius (Montagne Sainte-Geneviève), it overlooked the confluence of the rivers Bièvre and Seine.

Half-size amphitheatres were then common in Northern and Central Gaul.

These regions indeed had a lower population density.

The Arenes de Lutece therefore served as theatre and arena.

However, they only served for 3 generations; they were indeed hastily dismantled during the barbarian invasions of 285AD!

Their stones were re-used in order to build a rampart around the Ile de la Cité.

Further dismantlement took place during the 9th century Norman invasions in order to reinforce the rampart, then to erect new buildings in time of peace.

The ruined Arenes de Lutece fell into oblivion over the centuries.

They even ended up buried under meters of earth!

They were 'rediscovered' during the opening of the Rue Monge in the 1860s.

However, they were once more forgotten until 1883.

They would even have been pulled down, if Victor Hugo had not succeeded in raising enough public attention and funds for their restoration! 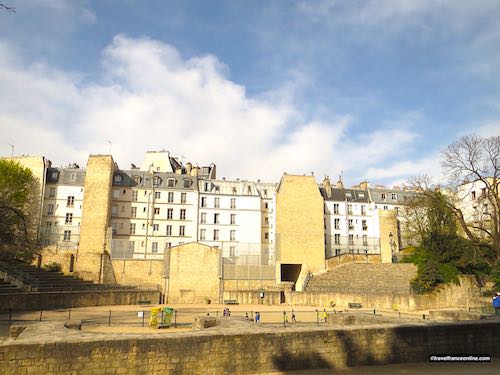 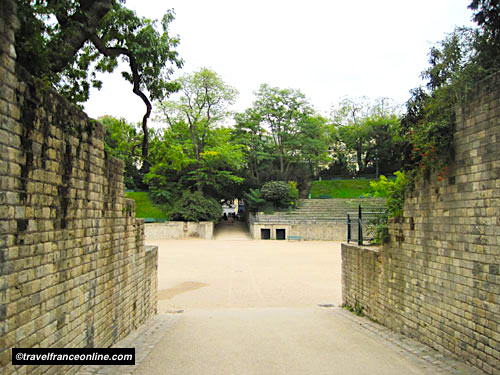 Entrance to the Arenes de Lutece 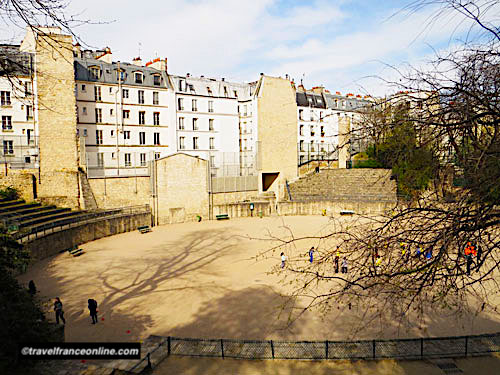 That said, the polemic linked to their preservation or destruction lasted until 1918, when extensive restoration and reconstruction work was eventually carried out.

So little was left of the southern stands, that buildings were erected on their foundations.

The rest of the ruins were restored to the identical.

A public garden and children playground was landscaped on the northern side.

The Square Capitan pays tribute to Dr. Capitan, who conducted the restoration works.

If you take the time to look around, you'll find countless vestiges of outbuildings scattered among shrubs and flowerbeds.

A great visit to do with children because they can run and play freely; a good place for a picnic too!