A few facts about Paris

The City of Paris is the capital of France, the Préfecture of the Ile-de-France Region and a département since 1975.

Paris is divided into 20 arrondissements - districts (administrative divisions). These are distributed in spiral that evokes a snail shell.

Districts are divided into 80 quartiers or neighbourhoods, which developed from the ancient parishes.

Paris and Greater Paris cover 2000km2 with nearly 10 million inhabitants, a sixth of the French population.

Antic Paris was known as Lutetia until 360AD.

Sainte-Geneviève became one of the three patron saint of Paris (with Saint-Denis and St-Marcel) after successfully rallying the Parisians to resist Attila and his Hun warriors in 451AD.

In 508AD Clovis, the first King of France and the first to convert to Christianity, made Paris the capital of the Frank Kingdom.

Hugues Capet made Paris the capital of France when he became king in 987. 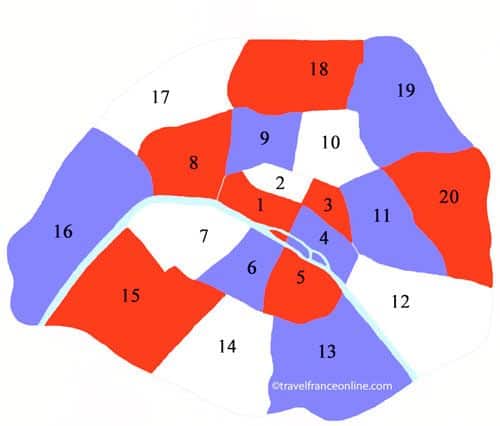 Paris coat of arms and motto

Paris coat of arms depicts a silver-white sailing boat fiercely sailing on the waves, against a red background.

These bearings symbolise the antic Lutetia.

Long before the Roman conquest, the Gallic tribe of the Parisii built their oppidum (fort) on the Ile de la Cité.

An important port, Lutetia stood in the middle of the Seine, that flows east-west and traversed the antic north-south road.

Two wooden bridges connected the island to the right and left banks. Six other bridges were built over the centuries.

Seen from above, the almond-shaped Ile de la Cité looks like of 'a sailing vessel', the bridges being its unfurled oars and the western tip its figurehead. 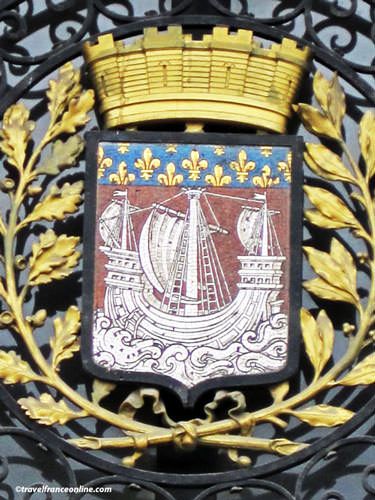 The powerful Guild of the Watermen of Paris

The Parisii acquired their wealth from hunting and from the water trade, and mostly from charging tolls for transportation of goods on the Seine.

Paris coat of arms reflects the importance of the Guild of the Watermen of Paris  or Nautes Parisiens.

The corporation indeed played a major political and economical role in the development of the capital throughout the centuries.

Its members retained the monopoly for traffic on the Seine, Marne, Oise and Yonne rivers, controlled the exchanges and collected levies. Over the centuries, they became wealthy merchants and entrepreneurs.

In 1246, Paris was a large city that needed a separate administration.

In 1260 Louis IX (Saint-Louis) therefore granted the residents of Paris the freedom to elect their aldermen. These Echevins were members of the powerful Guild of the Watermen.

Their leader, the Provost of the Merchants of Paris, enjoyed a status equivalent to that of a mayor. 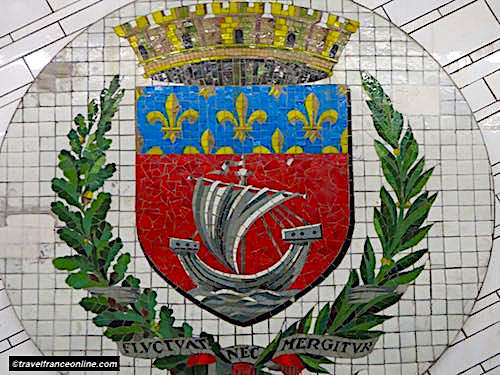 The bearings on the coat of arms of Paris

The Guild's armorial bearings, a sailing boat, was officially adopted as Paris coat of arms.

In 1358 Charles V added the Fleur de Lys, the emblem of the French Kings, to Paris coat of arm; golden Fleurs de Lys against a blue background filled the upper section of the coat of arms.

Clovis was the first king to adopt the Fleur de Lys (iris) as royal emblem in 507AD, after defeating the Visigoths at the Battle of Vouillé near Poitiers.

The legend has it that a large colony of water irises indicated the presence of a ford. Clovis and his men crossed the river at night and slaughtered the Visigoths in their sleep.

The motto was added during the 16th century and remained until the French Revolution.

The Prefect of Paris Haussmann re-introduced it and made it official through an act dated November 24, 1853.