The Fleur de Lys has officially been the emblem of the Kings of France since the 12th century.

The French fleur de lys is a yellow iris represented in a stylized form.

However, it is commonly mistaken for a lily (lys or lis in French).

Why a yellow iris?

Three legends attempt to explain the origin of the Fleur de Lys on the coat of arms of our French monarchy.

They are slightly different, but all go back to the late 5th century, when Clovis, the first King of France, converted to Christianity. 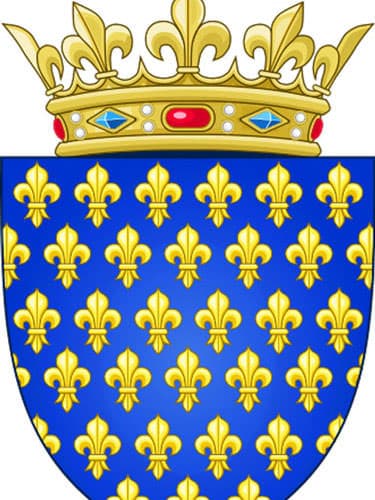 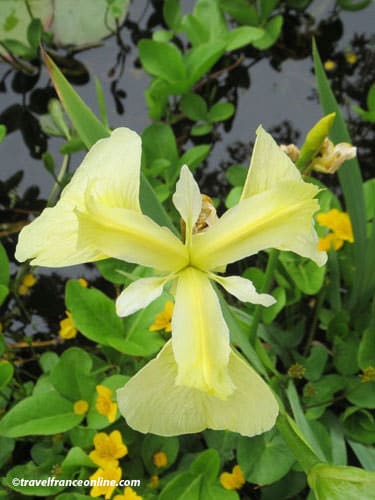 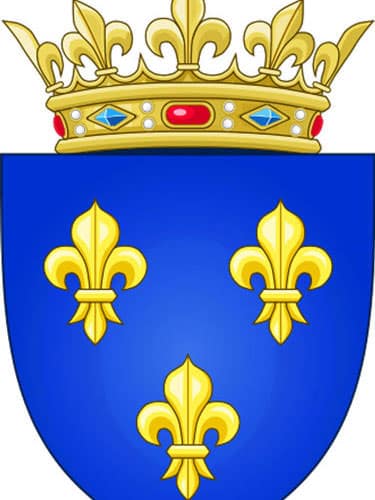 The Frankish king Clovis was pagan.

However, he converted to Christianity at the Battle of Tolbiac (near modern Cologne) in 496AD.

Legend has it that an angel indeed appeared and promised him victory if he traded the three toads that adorned his shield against three golden Fleurs de Lys.

Clovis defeated the Alamanni and immediately adopted the Fleur de Lys as his emblem!

That said, you're probably wondering why a king would put toads on his coat of arms?

The Franks' territory covered the current Flanders in Northern France, a flat country of marshes.

The toad lived in marshes, however, he was equally at ease in the water (the Kingdom-Below) and on land (the Kingdom-Above).

The Franks believed that marshes and waterfalls were portals that connected the two kingdoms.

The toad traveled at will from one kingdom to another.

In Pagan mythology, he was therefore considered a shamanic creature that opened the portals between the two kingdoms.

The symbolism of the toad was almighty and therefore well worthy of a king!

A variation of that legend tells us that the Lord of Armentières (in Flanders) added yellow irises to his coat of arms, as they grew in abundance on the banks of the Lys, the small river that flowed across his land.

The king of France adopted the Fleur de Lys (the flower of the river Lys) when he annexed the fiefdom of Armentières.

In 507AD Clovis and his men fought against King Alaric II and his Visigoths.

The latter forced the Frankish king and his men to retreat in the swamps of the river Vienne, near the town of Vouillé, south of the modern city of Poitiers (south-western France).

The battle seemed lost to Clovis, until he saw a deer crossing the river among water irises; these obviously indicated the presence of a ford!

Taking advantage of a moonless night, Clovis and his army forded the river.

They surprised the Visigoths in their sleep and killed Alaric II in the early hours.

As a result, the victorious Clovis adopted the yellow iris as emblem on the spot!

Clovis and his wife Clotilde (a Christian Princess of Burgundy) lived in the Château de Montjoie in the Forêt de Cruye (modern day Forêt de Marly to the west of Paris).

The pious Clotilde used to pray with a hermit who lived by a fountain located nearby the castle.

One day an angel appeared to the hermit and told him that Clovis was to replace the three toads (a pagan symbol as you know!) on his coat of arms with three golden Fleurs de Lys.

The Fleur de Lys was often used over the following centuries, but didn't officially enter on the royal coat-of-arms before the 12th century.

Emblem of the Kings of France

In fact, the High Priest of Israel's blue talar toga adorned with stars and constellations was more often used in the royal coat-of-arms.

It was not until Louis VII in 1150 that the Fleur de Lys became the official emblem of the kings of France!

So now, you may wonder why the yellow iris became known as Fleur de Lys if it was not a lily?

Many kings of France were called Louis, a name that evolved from Clovis.

Clovis was actually known as Chlodowech (which meant famous warrior in Frankish language).

It then evolved into Chlodowichus, Lodovicus, Ludovicus and Ludovic, but also into Lodoïs, Loys and eventually Louis.

The yellow iris adopted by Clovis as royal emblem became known as the Flor de Loys - flower of Clovis.

The name was soon assimilated to Flor de Lys - flower of (the river) Lys.

Philippe-Auguste was the first king to use a blue banner dotted with Fleurs de Lys when he left for the 3rd Crusade in 1191.

The matching royal shield appeared in 1207.

The number of Fleurs de Lys was officially fixed to three in 1376.

The Fleur de Lys is commonly represented as a stylized yellow iris placed against a blue background.

There are 300 botanical species of irises; some have rhizomes, others bulbs.

Iris Germanica with its  blue-purple flowers, our beautiful common iris, is used as the basis for obtaining new hybrid varieties.

Iris Germanica is native to all Mediterranean countries; the Egyptians then the Greeks and the Romans already used it as a decorative pattern millennia ago.

The Greeks noticed the "iridescent" texture of its petals, texture that varies with the light and sparkles.

They named the flower after the Goddess Iris, the Messenger between gods and men, as they believed that the rainbow was the goddess' scarf.

Centuries later, Christians turned the iris into a symbol of purity and innocence of the Virgin Mary.

However, they also associated it with white lilies, which contributed to the confusion between the two flowers.

As you now know, the yellow iris or Iris pseudacorus is our beloved Feur de Lys.

It thrives in marshy and even flooded areas... the door to the Kingdom-Below.