Notre-Dame-du-Travail Church is one of the most interesting and unusual churches in Paris.

It is located on the south side of the Place de Catalogne and Echelles du Baroque.

If you speak a little bit of French, the church’s name should intrigue you.

Notre-Dame-du-Travail translates indeed basically as 'Our Lady of the Labourers'.

It was indeed built as a parish church for the workers who built the Gare Montparnasse.

The construction of the Embarcadère de l’Ouest (as the train station was initially called) in the 1840s attracted legions of workers who settled in the district.

They initially worshiped in the parish church of the village of Plaisance.

A second wooden church, Notre-Dame de l'Assomption de Plaisance, was built in 1845 in order to accommodate their ever-growing numbers.

The church was renamed Notre-Dame de Plaisance in 1860 when the village of Plaisance was integrated to Paris.

Construction and demolition of the universal exhibitions, that were held on the nearby Champ de Mars in the second half of the 19th century, attracted more workers!

A new church was more than needed!

In 1884, the local priest therefore issued a national subscription in order to raise funds for its construction.

The architect Jules Astruc drew the plans and a site adjacent to the original church was chosen.

Notre-Dame-du-Travail Church was inaugurated in 1902 and Notre-Dame de Plaisance was demolished in 1909. 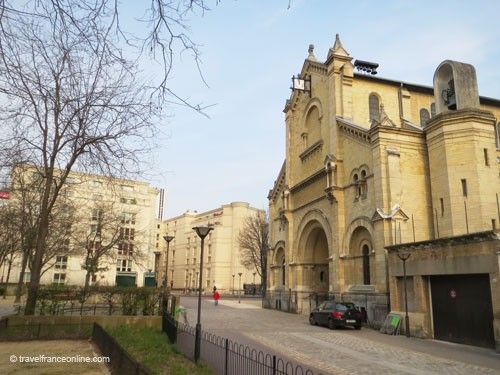 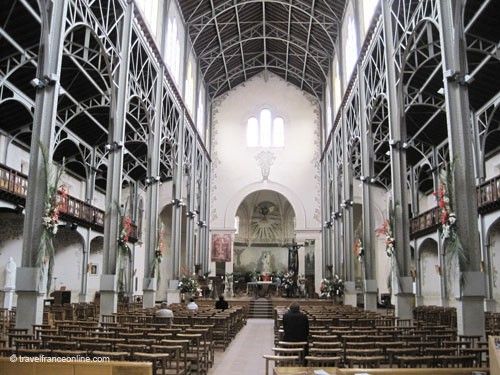 A masterpiece of metal architecture

So, what is unusual about Notre-Dame-du-Travail Church?

Notre-Dame-du-Travail Church was built in 1902.

It's therefore a perfect illustration of metal architecture.

The architect Baltard introduced this revolutionary architectural style in the second half of the 19th century.

The architect Astruc created also a true masterpiece of metal architecture when he built Notre-Dame-du-Travail Church.

Its neo-Romanesque facade and two octagonal towers are indeed quite conventional.

The neo-Byzantine mosaic of its tympanum is obviously contemporary, but still conventional.

It depicts 'The Virgin and Child' and was created in the Taillefert studio, one of the leading mosaic experts of the time.

Its bell was brought back from Sevastopol during the Crimean War of 1855!

Nothing, therefore, prepares you for its unusual interior!

It's quite similar to the interior of the stunning Art Nouveau St-Jean-de-Montmartre Church.

It is believed that the steel hoops used for the vaulted nave were recovered from the roof of the Palais de l'Industrie that was built for the Universal Exhibition of 1900.

Colourful stained glass windows with geometrical patterns cast a warm light that is reflected by the metal beams and columns. 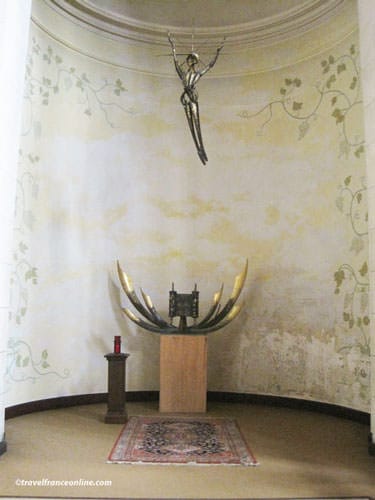 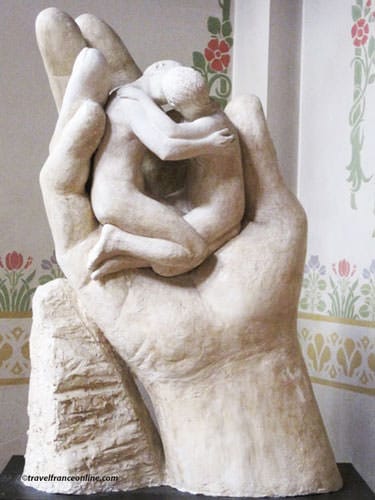 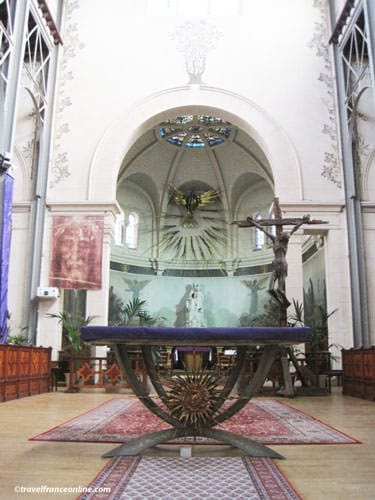 Notre-Dame-du-Travail Church is undoubtedly very contemporary and quite eclectic!

It combines an interesting mix of styles that illustrate the evolution of art from Art Nouveau to the early 20th century.

The church boasts an elaborate metal structure and impressive dimensions that are accentuated by the metal columns supporting the frame.

Some of the architectural and decorative features, however, soften the coldness of the metal.

The three arches of the neo-Roman chancel immediately catch your eyes.

Guiseppe Uberti and Emile Desouches painted the murals of the lateral chapels.

Some depict scenes from the life of Sainte Geneviève, the patron saint of Paris.

Others illustrate the different trades and their patron saints.

These include 'Saint Eligius, patron of metallurgists, Luke the patron of artists and art workers' or 'Saint Joseph the patron of carpenters and joiners'.

Each mural is shaped as a half-moon and is surrounded by a delicate Art Nouveau garland of foliage. 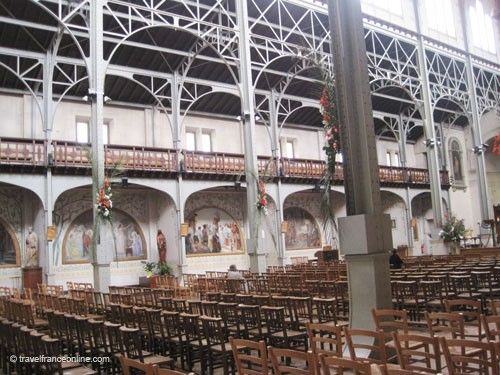 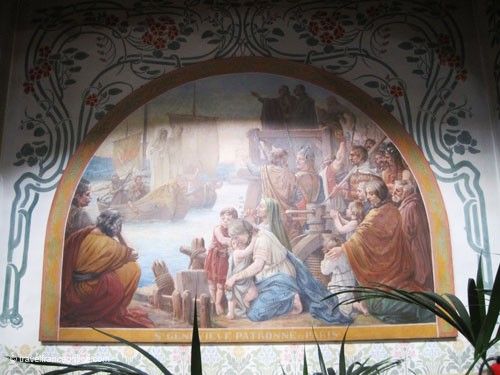 Joseph Lefebvre completed the statue of Notre-Dame-du-Travail in 1898.

The statue of the Virgin Mary stands under a sculpture of the Dove of Peace by Jean-Jacques Bris.

It seems to protect the carpenter’s tools carved on its base.

The right hand side depicts the 'Unemployed workers imploring the help of the Virgin'; the left hand side the 'Workers glorifying the Virgin'.

The left hand side chapel contains a contemporary sculpture by Jean-Jacques Bris representing 'Christ in Glory'.

These include murals, canvases, Stations of the Cross, various sculptures and mosaics...

You’ll come across a moving Pietà -Virgin kissing the Hand of Her Dead Son sculpted during the interwar period by Georges Serraz.

You’ll find the baptismal font decorated with an Art Nouveau mosaic created in the Taillefert studio.

You’ll discover a replica of the Assumption painted in 1865 by Pierre-Paul Prud'hon.

This painting is one of the very few items recovered from Notre-Dame de Plaisance Church.

As you leave you'll see the impressive organ.

The organ maker Haerpfer created it in 1991. 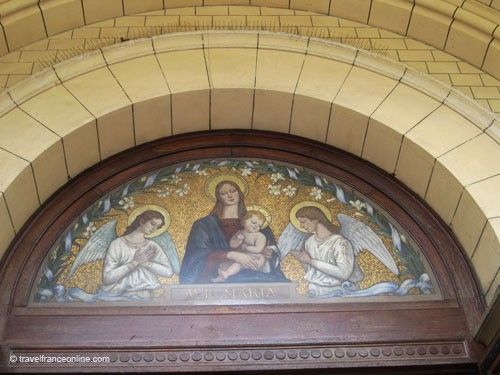 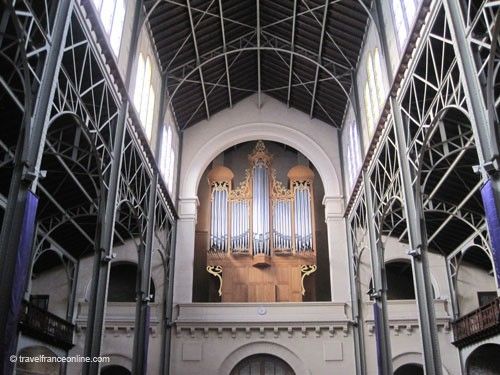 One of my favourite art work is 'La Main Créatrice' by Michel Serraz.

This monumental sculpture representing a hand clasping Adam and Eve.

Notre-Dame-du-Travail Church might not have the solemnity of a Romanesque or Gothic church.

It is, however, well worth the detour because it is one of the few churches of Paris entirely built on a metal structure.

This therefore makes it rare!

This was the time when Paris was then in full renovation and expansion.

This was the time when France suffered the worse rural exodus, when legions of poor farm workers flocked to Paris in the hope of finding work and crowded in makeshift dwellings.

Nobody remembers their names, but they contributed to the making of modern day Paris.

Notre-Dame-du-Travail was their church and it was classified Historical Monument in 1976.