Newfoundland Memorial Park is located between the villages of Beaumont Hamel and Auchonvillers along the D73 road.

The large and free car park, opposite the entrance, was open on the site of the Uxbridge Road Trench.

You can see its outlines in the tarmac and the grass.

Newfoundland Memorial Park was created on the site of the offensive that took place on July 1, 1916.

The battlefield has been preserved in its war state for future generations.

The Visitors Centre, inaugurated on July 1, 2001, relates the setting and progress of the battle.

It exhibits various documents, memorabilia, photos and video clips which focus on Newfoundland and the history of the Royal Newfoundland Regiment.

The Veteran Affairs Canada administers it; Canadian students will take you on a free guided tour of the park.

Newfoundland and Labrador were a former colony and dominion of the United Kingdom until March 31, 1949.

They became the 10th Province to enter the Canadian Confederation under the joint name of Newfoundland.

An amendment made to the Constitution of Canada on December 6, 2001, changed the official name of the Province to Newfoundland and Labrador.

However, most Canadians still refer to the two areas using their respective names.

The Dominion of Newfoundland bought the land after WWI and transformed it into a Place of Remembrance. 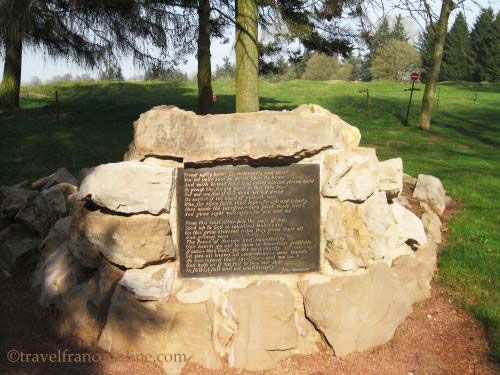 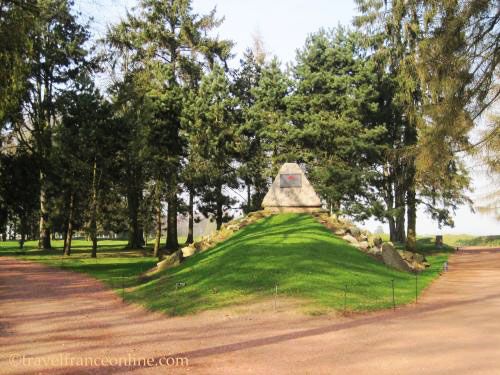 The Newfoundland Memorial Park honours the memory of the men of the Royal Newfoundland Regiment, who took part in the deadly offensive of July 1, 1916.

The architect Cochius landscaped the site.

A bronze slab placed by the entrance is engraved with a dedication and poem by John Oxenham (1852-1941):

Tread softly here! Go reverently and slow!
Yea, let your soul go down upon its knees,
And with bowed head and heart abased strive hard
To grasp the future gain in this sore loss!
For not one foot of this dank sod but drank
Its surfeit of the blood of gallant men.
Who, for their faith, their hope,—for Life and Liberty,
Here made the sacrifice,—here gave their lives.
And gave right willingly—for you and me.
From this vast altar—pile the souls of men
Sped up to God in countless multitudes:
On this grim cratered ridge they gave their all.
And, giving, won
The peace of Heaven and Immortality.
Our hearts go out to them in boundless gratitude:
If ours—then God's: for His vast charity
All sees, all knows, all comprehends—save bounds.
He has repaid their sacrifice:—and we—?
God help us if we fail to pay our debt
In fullest full and unstintingly!

A second stone, a few steps farther, bears a Memorial slab dedicated to the 29th Division; it also has a red triangle, the regiment's badge. 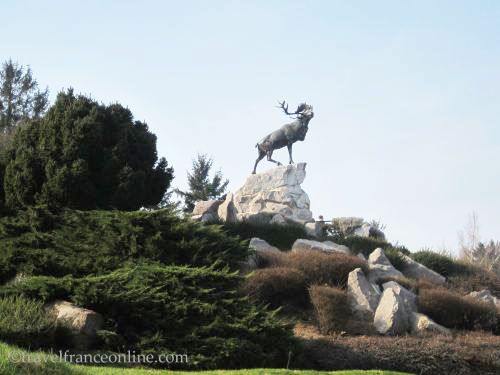 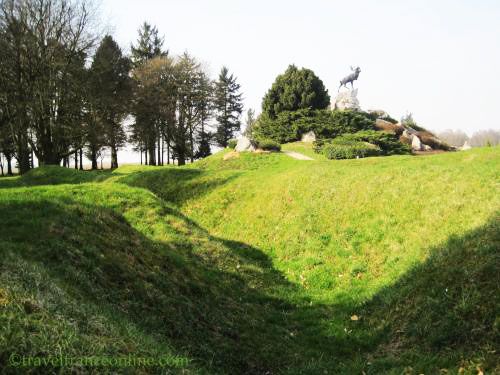 Newfoundland Memorial Park is a battlefield and a burial ground.

The statue of a Caribou, the emblem of the Newfoundland Regiment, watches over the Dead.

The statue stands on a man made cairn surrounded by shrubs native from Newfoundland.

It represents a male stag "standing atop a cairn of Newfoundland granite facing the former foe with head thrown high in defiance".

The Caribou looks towards the slope of the battlefield, where so many are still buried.

Three bronze slabs, engraved with the names of the 814 Newfoundlanders who died during WWI and of those who have no known grave, are affixed on the memorial base. 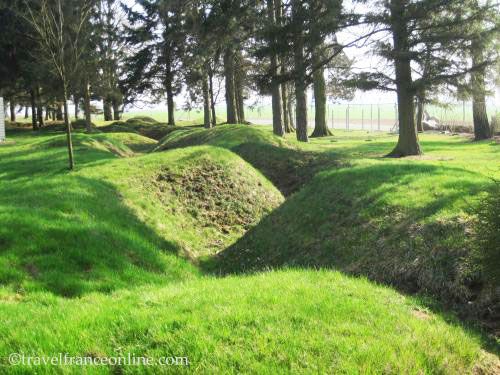 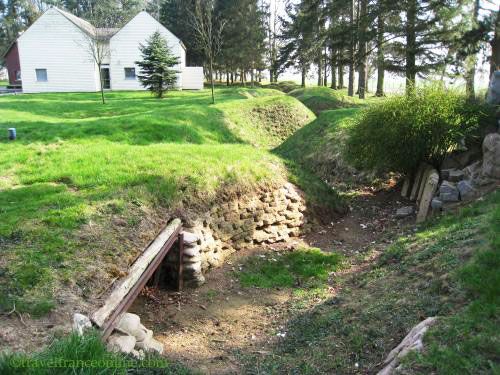 On July 1, 1916 the men of the Newfoundland Regiment took part to a large British offensive which targeted the German front and rear positions.

The French were positioned in this sector until August 1915, when the British took over.

The Germans, positioned in the sector of Beaumont Hamel since the beginning of the conflict, were mostly miners.

They had been digging an extensive network of bunkers and caves, in order to improve their defense.

One of these massive bunkers, built into the natural feature of a Y shaped ravine, was located at the bottom of the hill.

The British Battalions of 29th Division were positioned in their front line's trenches, on the ridge, at the level of the Solitary Caribou Memorial.

The Germans, positioned below in Y Ravine, had therefore an enormous strategic advantage.

The British artillery had been constantly firing  for the previous seven days, in order to weaken the German defense.

However, the Germans suffered minor losses during this attack, as they took refuge in their bunkers and caves.

They also re-positioned in their trenches, as soon as the  artillery fire stopped, shortly before the British launched the assault.

They had manned their machine guns and were waiting...

The Commonwealth troops launched at 7.30am on July 1, 1916, ten minutes after the Hawthorn mine was blown to the left of their positions.

The men of the 29th Division rushed out of their trenches and tragically became easy targets.

They were systematically shot down, as they progressed down the slope towards the German trenches and machine guns.

The first wave suffered massive losses, as did the Newfoundland Regiment who rushed out of their trenches at 9.00am.

Men were shot down as they exited the trenches; those who managed to climb out fell, while coming down the slope.

Too many died and too many were wounded before having a chance of reaching the German front line.

The field, where this tragic offensive took place, has become a vast burial ground; many men indeed still lie in the earth.

The men, who fell on July 1, 1916 and were buried in battlefield graves, were reburied the following year in Y Ravine Cemetery.

The cemetery is located at the bottom of the slope and was initially called Y Ravine Cemetery No. 1.

However, only 275 out of the over 400 men reburied there were identified.

A petrified tree, known as the Danger Tree, was kept at the bottom of the slope; a sad witness of this deadly attack!

It is believed that 53 British soldiers and 8 Newfoundlanders are still buried in the grounds of the Memorial Park... 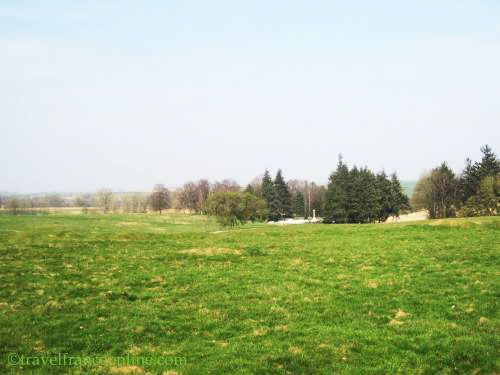 Hawthorn Ridge Cemetery No.2 is also located on the grounds of the Newfoundland Memorial Park.

Sadly, only 149 were identified.

This ridge used to be the no man's land zone which separated the Allies from the German front lines.

The British named it Hawthorn Ridge, because of the hawthorn tree that grew there, when they took their positions on the site in 1915. 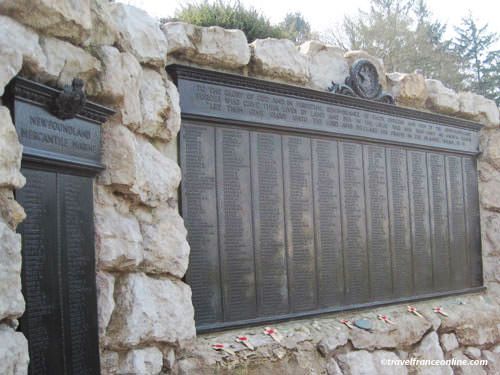 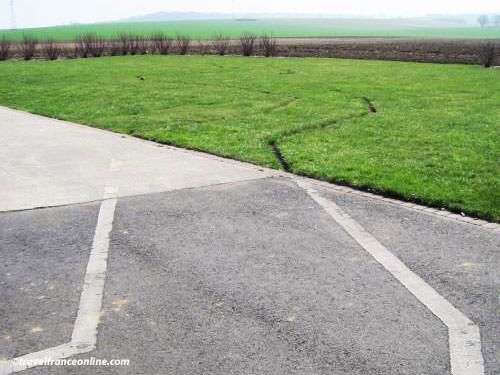 Hunter's Cemetery and Memorial to the 51st Highland Division

The Memorial to the 51st Highland Division represents a Scottish Soldier in a kilt looking towards Y Ravine.

The statue, by sculptor George Harry Paulin, represents a Sergeant Major of the Division.

It stands near Hunter's Cemetery, where over 40 men of the 51st Highland Division and the 63rd Royal Naval Division were buried.

The circular-shaped cemetery was opened in a shell crater!

It is said that it was named after an Army Chaplain, Reverend Hunter, who was attached to one of the regiments that fought along the 51st Division.