May 8 - a dual commemoration in France

8 Mai - Victoire 1945 or V-E Day is one of the three French National Day or 'Fêtes Nationales'.

The other two are July 14 – Bastille Day and November 11 – Armistice Day.

May 8 is an important date in France, as it marks a double commemoration.

1- It commemorates of course the end of WWII and the victory of the French and their Allies against Nazi Germany.

The German Marshal Alfred Jodl indeed signed the unconditional surrender of the German Army in Reims on May 7, 1945 at 2.41am.

However, Stalin demanded that the German surrender took place in Berlin.

A new signature therefore took place there on May 8 at 23h01 local time and in the presence of representatives of the USSR , France, Great Britain and the USA.

When Gal de Gaulle, the head of the interim government, made the announcement on May 8, 1945, all the bells of France rang at 3pm to celebrate and spread the news.

2- However, in France May 8 commemorates also the massacre of Setif, Guelma and Kherrata perpetrated by Algerian nationalists during the celebrations marking the end of WWII.

According to historians the number of people killed would vary between 8000 and 15000! 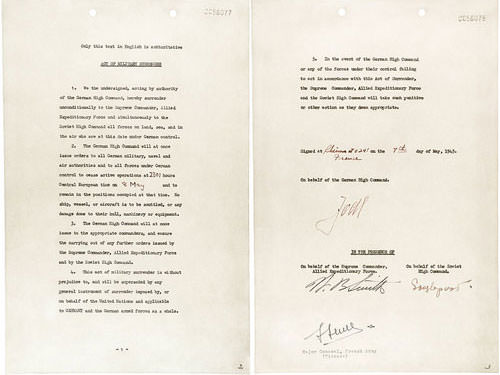 Unconditional surrender of the German Army 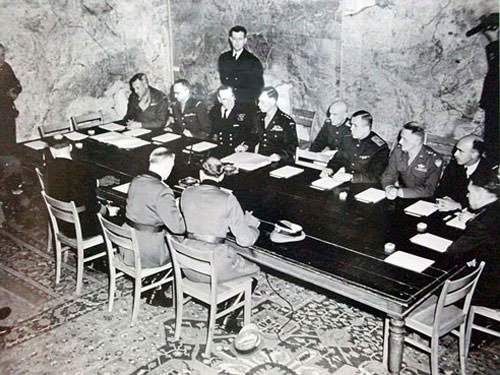 Joan of Arc was burnt at the stake on May 30, 1431 and is regarded as a national heroine.

She was canonised in 1920 and is one of France's patron saints. She is celebrated on the Sunday following May 8 to commemorate the day she delivered the city of Orléans from the English.

Her celebration was made a National Holiday.

2- However, on April 11, 1959 Gal de Gaulle suppressed it to begin reconciliation with Germany. However, many veterans weren't impressed with this decision and kept celebrating the end of WWII on Sainte Jeanne D'Arc Day.

3- May 8, was exceptionally celebrated in 1965 as it marked the 20th anniversary of the end of WWII.

4- May 8 celebrations were re-established on May 8, 1968, but took place after office hours!

5- President Giscard d'Estaing went even further in 1975. He completely suppressed the commemoration of the Allied victory of 1945!

The purpose of such a controversial decision was obviously to allow young generations to grow without keeping prejudice against Germany and consolidate reconciliation.

May 8 was therefore neither a National Holiday, nor a national commemoration.

Once more, many veterans badly perceived this decision and continued to commemorate May 8.

6- Surprisingly, it was President Mitterrand who restored the commemoration of the Victory of 1945 and re-instated this day as a holiday on October 2, 1981! 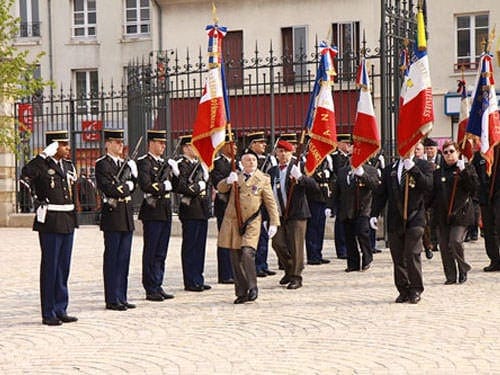 How do French people celebrate May 8?

In Paris, the President of the Republic leads the ceremonies at the grave of the Unknown Soldier under the Arc de Triomphe.

Throughout France, each municipality, whatever its size, organize parades and tributes to commemorate May 8th.

A procession/parade preceded by the French flag and the municipal band heads towards the War Memorial. It includes the mayor, the municipal council, representatives of the veterans' associations, the clergy, the gendarmerie, the firemen and local personalities (prefect, president of region etc…for the big cities).

The flag is hoisted, officials make their speech then lay wreaths at the foot of the War Memorial.

The band plays the Sonnerie aux Morts - Ringing of the Deadas the flag bearers lower their flags.

The band then begins Rompez les Rangs - Disband and the participants are invited to a reception at the town hall.

Beware that some roads or city streets may be closed to traffic and pedestrians for the time of the celebration.

All state offices, such as the Post Office but also banks, most companies and many shops are closed.

Some bakeries and shops remain open, however, some for part of the day only.

Many restaurants and cafes located outside the tourist areas are also closed.

Airlines, SNCF (trains), the RATP - Paris Metro and major bus companies work. However, some may have reduced services, while others may increase their frequencies!

It is best to check their websites before hand.