Remembrance Day - November 11 is a National Day in France.

An official ceremony commemorates the anniversary of the end of hostilities, which took place "at the 11th hour of the 11th day of the 11th month" in 1918.

The Great War, however, officially ended with the signing of the Treaty of Versailles on June 28, 1919.

All municipalities, regardless of their size, have a commemorative ceremony.

A wreath of blue-white-red flowers is placed on each War Memorial, which is located either on the town's square or by the church.

The President of the Republic chaired the Parisian celebration and lays a wreath on the Tomb of the Unknown Soldier under the Arc de Triomphe at 11am.

Two consecutive minutes of silence are observed at 11am local time.

The first minute is dedicated to the nearly 20 millions people who lost their life during WWI.

The second pays tribute to the living left behind, the mourning mothers, wives, brides to be and sisters…

Unknown Soldier's Grave under the Arc de Triomphe in Paris

The ashes of an Unknown Soldier from WWI were laid on January 28th, 1921.

They should have been placed in the Pantheon.

However, the French people decided by way of a petition that his ashes were to be placed under the Arc de Triomphe.

The arch is indeed one of the most prestigious military monuments in Paris.

On his tombstone is engraved:

The Flame of Remembrance was placed on his grave and lit on November 11th, 1923.

It burns in memory of the Dead of WWI and WWII who were never identified, and is rekindled every evening at 6.30pm. 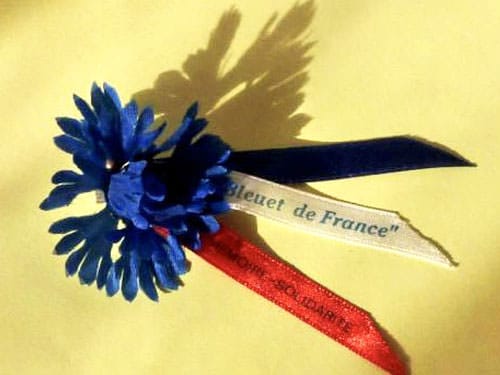 Cornflowers (and poppies adopted by the British!) were indeed the only flowers that still grew on the various battlefields despite the shelling that transformed the land into lunar landscapes.

These two flowers therefore became a symbol of the resilience of life, life that went on in the mud of the trenches!

Bleuet (blue cornflower) was also the nickname WWI veterans (Poilus) gave to the young recruits of Class 15 - those born in 1895.

The new recruits who fought on the Chemin des Dames, wore brand new uniforms that were bleu horizon (sky blue). 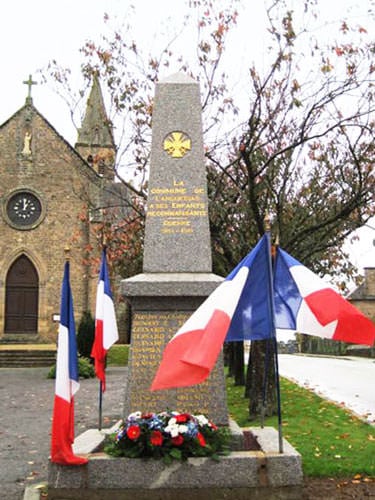 Remembrance Day in a French village 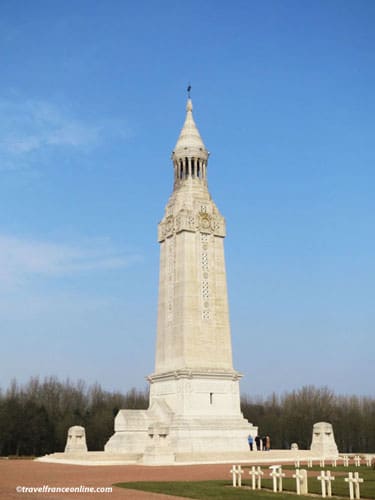 British observe two minutes of silence at the 11th hour on November 11.

However, they commemorate the end of the Great War on the second Sunday of November, which has been since known as Remembrance Sunday.

The poppy is associated with Remembrance Sunday.

The delicate flower carpeted the battlefields of Flanders where so millions of men lost their lives during WWI.

Its vibrant colour therefore symbolizes all the blood that was shed.

The Royal British Legion is the nation's custodian of Remembrance Day.

It helps people understand the importance of remembering those who sacrificed their lives.

It also makes sure that they are never forgotten.

The annual Poppy Appeal is the Royal British Legion's biggest fundraising campaign of the year; it starts 2-3 weeks before November 11.

Millions of small wooden war crosses and poppy-shaped badges are sold every year to the public and contribute to raise considerable funds.

The poppy badge should be worn with the leaf positioned at 11am in order to commemorate the time of the signature of the Armistice.

However, the most important is to wear it!

Remembrance Day in other countries

All countries involved in the Great War commemorate Armistice Day as a national day, either on the day itself or at a fixed date.

1- The Belgian Armistice Day is a National Day celebrated on November 11.

2- In Poland, November 11 is a public holiday known as Independence Day.

It not only commemorates the end of WWI, but also their independence from Russia.

3- In the USA, November 11 is known as Veterans Day; it is both a federal and a state holiday in all states.

4- In Ireland, Armistice or Remembrance Day is not a public holiday.

However, the Irish people who died in past wars are remembered and honoured on National Day of Commemoration in July.

5- New Zealand's National Remembrance Day is Anzac Day and is celebrated on April 25.

Poppy Day usually takes place on the Friday before Anzac Day; the Australian and New Zealand Army Corps was originally commemorated by New Zealand and Australia.

6- Australians now observe Remembrance Day November 11, regardless of the day of the week, but the day is not a public holiday.

7- In Canada, Remembrance Day is a public holiday and federal statutory holiday, and a statutory holiday in all three territories and all the provinces exception made of Ontario and Quebec.

8- In South Africa, Poppy Day is commemorated on the Saturday nearest to Remembrance Day.

It is not a public holiday, however, a Remembrance Service is still held on 11 November each year in Cape Town.

9- Remembrance Day is recognized as November 11, however, it is not a public holiday in Barbados.

A commemorative ceremony is still carried out on Remembrance Sunday.

10- Remembrance Day is commemorated on November 11 in Bermuda, where it is an important holiday.

12- Vokstrauertag is the German National Day of mourning.

It takes place on the Sunday closest to November 16, because Germany doesn't observe the anniversary of WWI Armistice.