Liege Metro Station is on Line 13, which connects Saint-Denis Université in the north of Paris with Châtillon-Montrouge in the southern suburbs.

It was inaugurated in 1911 under the name Rue de Berlin, however, for very obvious reasons its name couldn’t be kept after the Great War!

The station was therefore renamed Liege to honour the memory and heroism of the Belgian troops at the Battle of Liege.

This special tribute was extended to the decoration of the station’s walls.

Nine monuments or sites from the city of Liege and its namesake region were indeed painted on ceramic tiles. A delicate Art Nouveau garland frames each painting. The effect is absolutely superb! 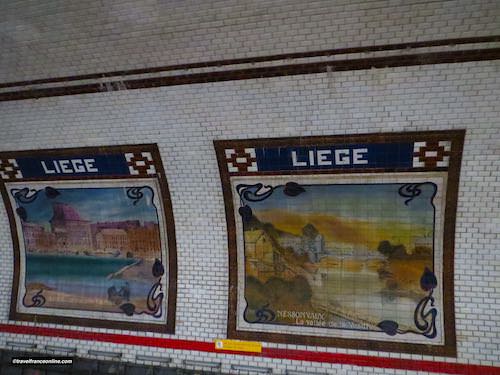 La Vesdre Valley in Nessonvaux and Bridge, Collegiate and Citadel of Huy,

When you get off at Liege Metro station, you’ll find only one platform and not two, as in most other stations.

Liege was indeed built under a narrow street, so there was not enough space for two standard facing platforms. The engineers of the time thus built it in length, a platform in front of the other.

Liege Metro station sits at the boundary of the 8th and 9th district.

It therefore serves the many cabarets, theatres and concert halls of the 9th district, but also the Quartier de l’Europe in the 8th.

This district is laid out around a central square, Place de l'Europe, and all the streets that converge to it bear the name of an European capital.