Vendredi 13 is French for Friday the 13th

There are between one and three Friday the 13th each year.

Friday the 13th is obviously the source of many superstitions and legends!

Many French take it for a lucky day, the others for a fateful day when it is better to stay in bed and wait for it to be over.

But where do these superstitions and legends come from?

In the Nordic mythology the number 13 became ominous because of Odin.

Legend has it that the God of War invited 11 of his gods friends to dinner in his kingdom of Valhalla, but voluntarily overlooked Loki, the God of War and Evil!

The furious Loki broke out among the 12 gods gathered for the banquet, but was stopped by Balder, the God of Love and Light and son of Odin.

A battle broke out between Loki and Balder, battle in which Loki killed Balder with an arrow in the heart.

The Nordic mythology provides also an origin for bad luck Vendredi or Friday, through the legend of Frigga or Freya, the Queen of the Gods and Goddess of Love and Fertility.

Freya was celebrated on Friday or Freya's Day.

The Norsemen introduced these name and tradition when they invaded England in the 8th century.

However, the spread of Christianity dislodged the old pagan superstitions.

Freya the Goddess of Love and Fertility was thus turned into a witch banished to the top of a mountain.

Christian legend has it that every Friday, Freya invited the devil and 11 other witches in order to cast evil on the human race.

Who could blame her after such a forfeiture. 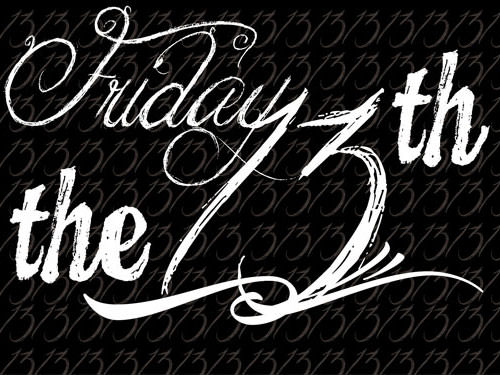 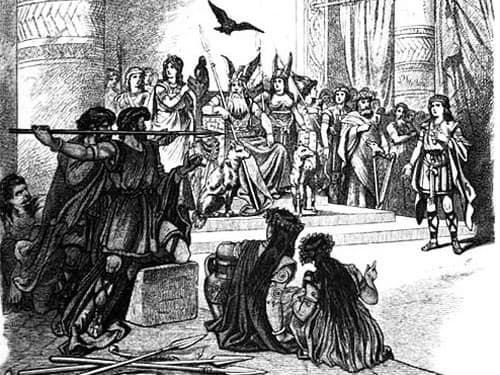 Greeks and Romans weren’t too fond of the number 13 either!

They, however, worshiped the number 12, which they consider the number of perfection and regularity.

Greeks therefore had 12 gods on Mount Olympus, 12 constellations, 12 signs of the Zodiac and divided the day into 12 hours of daylight and 12 hours of night (still is by the way).

However, the number 13 didn’t find grace in their eyes.

It indeed destroyed this perfect harmony, and therefore could only be bad!

As for Friday, it was the day of the executions, so it was not really a lucky day (at least not for those on death row!)

Many French see the origin of that day in the New Testament that links Friday the 13th to the Last Supper and Jesus’ Crucifixion.

Twelve of Jesus’ disciples attended the Last Supper, bringing the numbers of participants obviously to 13.

Jesus’ last meal took place before his Crucifixion on the Friday of the Holy Week.

The second most accepted origin in France for bad luck Friday the 13th, is that it is related to the odious trial to which King Philip the Fair submitted the Order of the Knights Templar.

In 1307 the king sent a letter to all bailiffs and Provosts of France (equivalent of our current mayors), letter which they had instruction to open on Friday the 13th of October.

This letter ordered them to arrest all the Knights Templar in France.

Thus, on Friday the 13th 1307, 2000 Templars were arrested, jailed and interrogated under torture!

Many confessed fictitious crimes and 54 out of the 140 Knights Templar who resided in the Paris Temple were burned at the stake.

Among them were the Grand Master of the Order, Jacques de Molay, and two other dignitaries including his assistant, Geoffroy de Charnay.

The three men died at the stake on Friday March, 18 1314 on the Square du Vert-Galant on the Ile de la Cité.

Before dying, Jacques de Molay cursed the king and the pope for their heinous act and summoned them before the Court of God.

Philip the Fair's two sons died, and as he had no other male descendants the Crown of France went to another branch of the royal family.

This makes one reflect on the power of superstitions, don't you think!

Is Friday the 13th a Lucky Day?

Despite all these legends and superstitions, Friday the 13th is considered a Lucky day by many French people, especially by those gaming.

Figures show that there are 3 times more gamers on Friday the 13th than on any other Friday!

This didn’t go unnoticed by the Française des Jeux, the official operator of France's national lottery games, which has renamed Friday the 13th as Jour de Chance – Lucky Day!

So is Friday the 13th a Lucky or Unlucky Day?

I would say it depends on one’s approach to life.