It is located along the D73, at the edge of Thiepval Wood, from where we can see the impressive Thiepval Memorial to the Missing peaking above the tree-tops.

It's also a stone's throw from the Ulster Tower Memorial and Mill Road Cemetery, on the opposite side of the road.

This is the sector where the British were positionned during the Battle of the Somme.

Open in autumn 1916, it initially contained 228 graves of men who fell mostly in summer and autumn 1916.

It was later enlarged when the remains of the men buried in the sector’s temporary battlefields and villages’ cemeteries were regrouped.

As a result,1,268 Commonwealth soldiers of the Great War are now buried or commemorated in Connaught Cemetery.

Tragically, about half are unidentified.

Connaught Cemetery contains also memorials slabs that pay tribute to the soldiers killed in 1916 and buried in Divion Road Cemetery no2 and whose graves were destroyed later during the war.

It also has memorial slabs to soldiers who are believed to be buried in the cemetery.

A mine explosion indeed damaged some of the gravestones in 1926, but their graves were left intact.

A soldier buried in Connaught Cemetery 99 years after his death

In 2013, workers found the remains of a soldier during road-work near Thiepval.

DNA tests allowed recovering the identity of this soldier of the Great War.

Sgt David Harkness Blakey was from the Royal Inniskilling Fusiliers, which depended from the 109 Brigade of the 36th Ulster Division.

He was fatally wounded on 1 July 1916, on the first day of the Battle of the Somme, while positioned on the edge of Thiepval Wood; he was 26.

The Ministry of Defence’s joint casualty and compassionate centre organised a burial ceremony.

In October 2015, he was finally laid to rest with full military honours in Connaught Cemetery in the presence of his descendants.

Two unknown soldiers were also buried alongside; one was from the Royal Irish Rifles and the second from the Cambridgeshire Regiment.

Pallbearers from the Royal Irish Regiment handed the Union flag that draped his coffin to his granddaughter.

Finally, Blakey’s great great-grandchildren read a poem his father wrote in his memory a century ago.

Sgt David Harkness Blakey was awarded the military medal for 'bravery in the field' in December 1916. 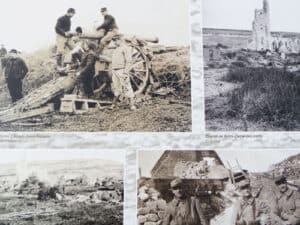