Saint Denis Basilique was the necropolis of the kings and queens of France from 987 to 1789.

It is dedicated to Paris's 1st bishop and patron saint, Saint-Denis, who was martyred in Montmartre in the 3rd century.

The village of Catulliacum was renamed Saint Denis in the 7th century, when Dagobert I transferred the holy man's relics to the abbey he founded in the tiny village.

The Abbey of Saint Denis, which the king endowed with generous donations, became one of the major pilgrimage sites in France.

King Pepin the Short rebuilt the abbey; the basilica was consecrated in 775AD. 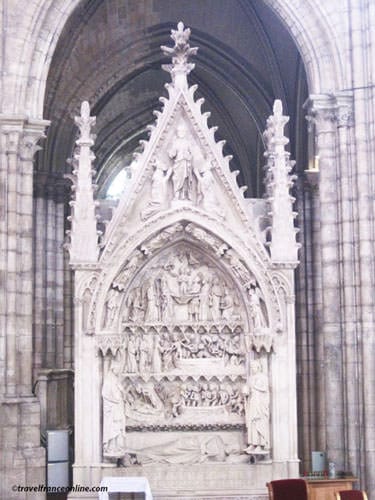 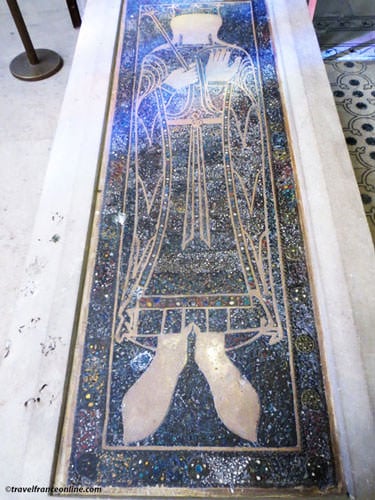 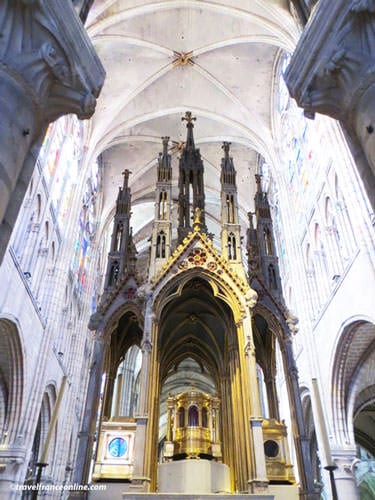 The legend of Saint-Denis, and the 'miracle of the leper', attracted pilgrims from the whole kingdom.

Legend has it that the poor man fell asleep in the basilica, the night before its consecration, and that Jesus appeared to him in a halo of light and cured him from his ailments.

Very little is known of this first basilica.

Excavations, conducted in the 1930s, uncovered various human and animal remains, including sarcophagi dating from the 4th and 5th centuries AD.

It would seem that the archaeological crypt is the original burial place of St. Denis.

The abbot Suger commissioned the reconstruction of the old Romanesque basilica in the 1140s. 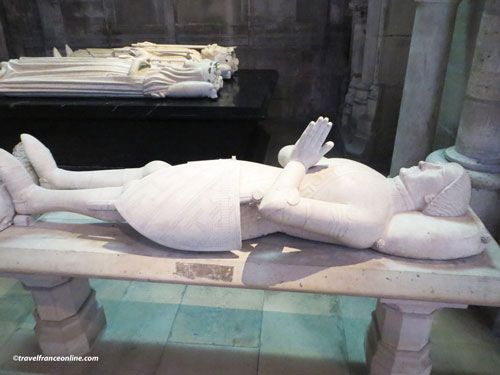 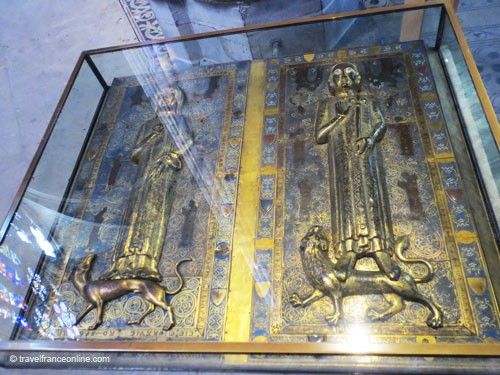 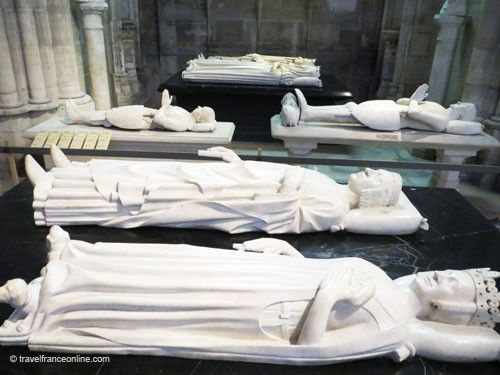 Saint Denis Basilique after the Revolution

The most innovative addition was the chevet.

A series of monolithic columns indeed support one of the first Gothic cross-ribbed vaults ever built in France.

In the 13th century, King St-Louis commissioned Pierre de Montreuil, one of the great masters of Gothic Rayonnant, with the completion of the work.

The abbey and basilica fortunately escaped destruction during the French Revolution.

However, the graves were desecrated, the royal remains thrown in common graves and covered with quicklime!

Napoleon reopened the basilica in 1806.

The last alteration dates from 1845; the architect Viollet-Le-Duc indeed demolished the north tower due to structural issues.

Saint Denis Basilique was consecrated as a cathedral in 1966. 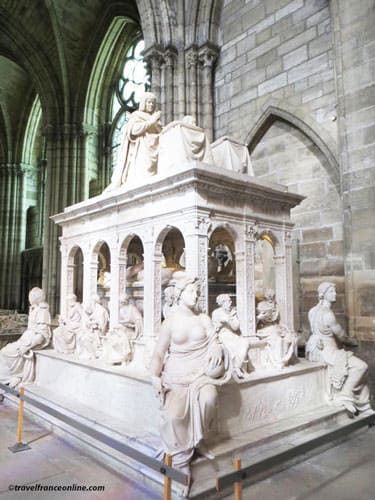 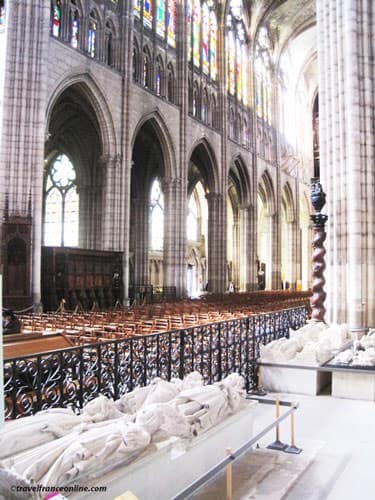 Kings' graves in the nave

Dagobert I was the first king buried in the basilica in 639AD.

His grave, rebuilt on the same spot during the 13th century, stands next to the shrine that shelters St. Denis' relics.

All Kings and Queens of France, but three, were buried in Saint Denis Basilique between 987 (accession of the Capetian dynasty) and 1789 (French Revolution).

The basilica contains over 70 royal funerary monuments and recumbent statues of 42 french kings, 32 queens, 63 princes and princesses and 10 great barons.

Theses monuments are a splendid illustration of the evolution of French religious architecture and sculpture through the centuries.

Merovingian and Carolingian (pre 987) grave tombstones and metal slabs are carved, yet quite understated.

Clovis, the first king of France was buried in Ste-Geneviève abbey church, and his descendants in St-Germain-des-Prés.

His recumbent statue, his wife Clotilde's and those of two of their children who died in infancy, were placed in the chevet during the 19th century.

Fourteen of the 16 recumbent statues, King St. Louis commissioned around 1263, were placed in the transept.

The recumbent statues of the Valois Kings (1328-1589) are considered the 'first official portraits' in the history of funeral sculpture.

They were indeed created when the royals were alive.

The Renaissance funerary monuments are located in the nave and ambulatory.

On the upper level of the mausoleum, the kings and queens are represented as they were when alive.

On the lower level, they are represented as naked and emaciated cadavers, humble and ready to meet God.

This sculptural style reflects the religious belief of the time, all men, kings or commoners, equal and humble in death.

They were indeed represented fully dressed lying on a lavish Italian Renaissance bed.

Tragically, all the graves were desecrated during the Revolution.

However, the museum curator Alexandre Lenoir saved most recumbent statues and monuments from destruction.

These were only stripped off their royal symbols or emblems!

He indeed claimed them as works of art for his Museum of French Monuments, the forerunner of the Louvre. 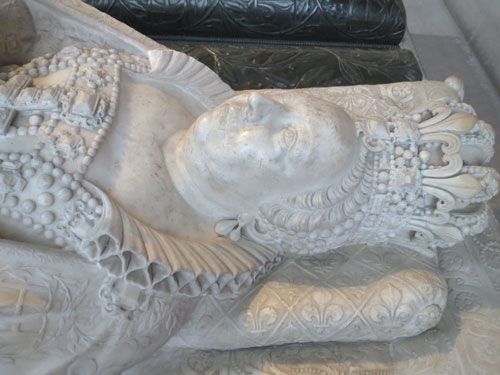 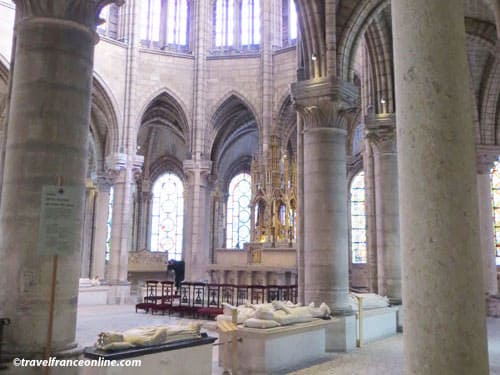 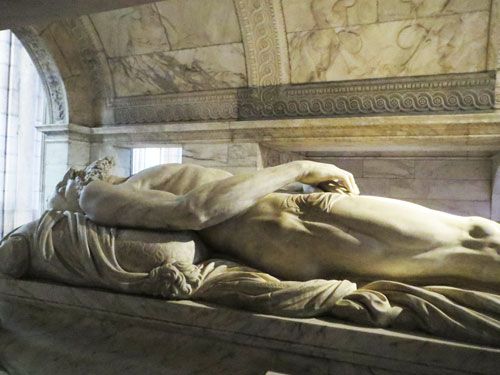 Cadaver tomb of Francois I

The Crypte de la Basilique Saint-Denis gathers the Archaeological Crypt where St.Denis was buried, the Royal Ossuary, Suger's Crypt where the Bourbons Graves were gathered and the Bourbons Chapel.

The Crypte Archéologique is the original burial place of St. Denis and contains several sarcophagi dating from the 4th and 5th centuries AD.

The Ossuaire Royal is a narrow corridor delineated by two black marble walls.

The graves of the kings and queens of France were desecrated during the French Revolution and their remains thrown in common graves.

In 1817 King Louis XVIII had all royal remains recovered and placed in the ossuary.

Sadly these remains couldn't be identified, as the revolutionaries covered them with quicklime.

The bones were placed together, the kings' on one side, the queens' on the other, all their names engraved in the black marble slabs. 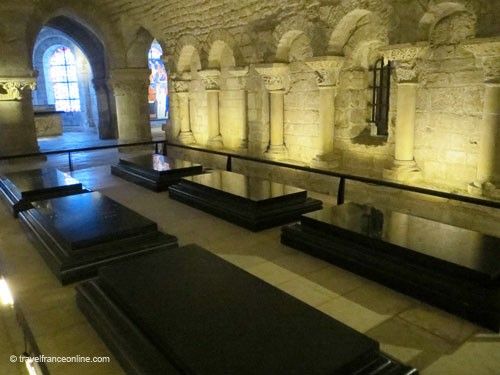 Suger Crypt with the graves of Louis XVI 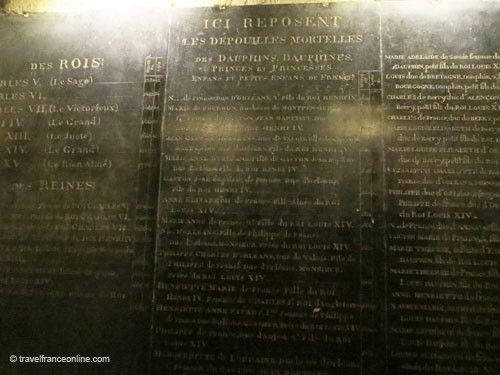 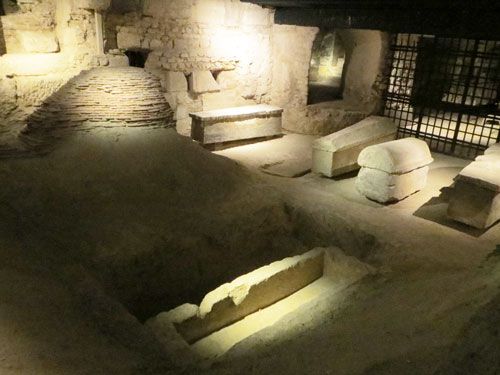 Louis XVIII transferred the remains of Marie-Antoinette, Louis XVI and his sister Madame Elisabeth from the Chapelle Expiatoire to Saint Denis Basilique on January 21, 1815, 22 years to the day after Louis XVI's execution.

Louis XVIII was the last Bourbon king to be buried in Saint Denis Basilique.

His tomb was placed between those of Louis XVI and Marie-Antoinette. 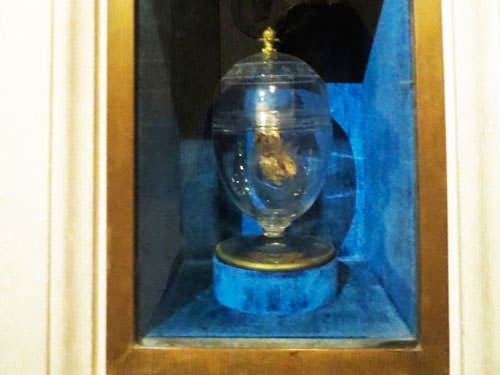 A corridor leads to the Chapelle des Bourbons, a small vault containing the various cenotaphs dedicated to the Bourbons.

An urn, placed in a small alcove embedded in the corridor's wall, contains the mummified heart of Marie-Antoinette's and Louis XVI's son.

The young Dauphin should have been crowned as Louis XVII if the Revolution had not occurred.

He died from illness (and despair I should think!) at the age of 10!

One of the physicians in charge of the autopsy secretly "kept" and mummified his tiny heart .

His bones couldn't be placed to rest in Saint Denis Basilique with those of his parents as he was buried in an unmarked grave.

His heart was formerly identified after DNA testing in 2004.