The Plateau de Californie is located on the eastern section of the Chemin des Dames.

It overlooks the village of Craonne and boasts fantastic views over the surrounding countryside.

This plateau was formerly known as Montagne de Craonne.

It was part of a 47ha farm and consisted of farmland, woods and underground quarries.

Henri Vanier, one of the investors in the Pommery Champagne house, bought the estate in the 19th century.

He built a mansion with a small zoo and a garden planted with exotic trees and plants native of America.

As a result, this garden became known as Jardin de Californie.

The site was renamed Plateau de Californie during the Great War.

The Plateau de Californie remained at the heart of constant fighting, because of its strategic position.

The Germans, who occupied the Chemin des Dames from the beginning of the war, had turned the Plateau de Californie into a true 'fortress'.

Underground galleries linked it to their other major positions.

These included the Caverne du Dragon, located underneath the Ferme de la Creute.

As the other sites of the Battle of the Chemin des Dames, the Plateau de Californie became tragically associated with the failed Nivelle Offensive of April 1917.

This offensive was one of the deadliest of the western front!

It indeed claimed an astronomical number of lives and resulted in deep loss of confidence and a series of mutinies among the French troops.

It was therefore deliberately overlooked!

Verdun, on the other hand, was seen as a victory and 'celebrated' (despite the huge toll in casualties). 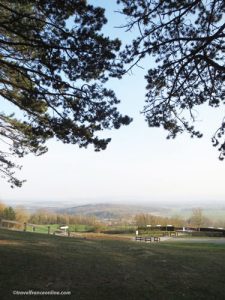 Entrance to the site and view over Craonne 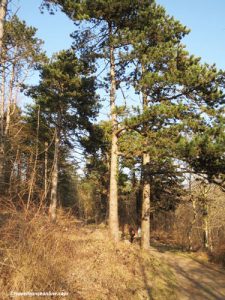 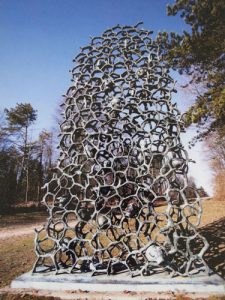 Sculpture by Haim Kern that was stolen 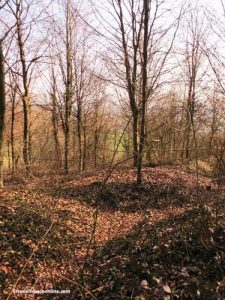 At the end of the war the Plateau de Californie and the Chemin des Dames had become a moonscape gutted with trenches and craters.

Such was its state that the entire site was declared ‘red zone’.

The French purchased it and turned it into a Site of Remembrance.

The Plateau de Californie was cleared of explosives.

It was then entirely replanted with pine trees.

Their roots today run among old craters and trenches.

Two marked trails will take you around the site, one in 30 minutes, the other in about an hour.

A 25m high observatory tower was built in 2013 on one of the view points along the longer path.

It boasts extensive views of the surrounding countryside.

Two memorials were placed on the Plateau de Californie.

The first was erected to the memory of the soldiers of the 18th RI.

The second was a monumental 4m high bronze sculpture.

It was inaugurated on November 5, 1998 in the presence of the prime minister Lionel Jospin on the occasion of 80th anniversary of the victory of 1918.

They didn't choose their burial'.