Mistletoe is one of the four plants traditionally adopted by Christians in order to celebrate Christmas.

Its evergreen leaves indeed symbolize 'life that does not die'.

Its white berries have always been known for their medicinal virtues, despite being poisonous if taken in large quantities.

It grows rarely on the oak tree, which was considered the King of Trees in the Celtic culture.

The druids therefore venerated the oak, as they believed in its magic powers against evil.

They also associated it with fertility, long life, good luck, health and a good harvest in the months to come.

They therefore considered the parasite plant the “soul’ of the Sacred Oak, because it sent out its roots into the trunk of the oak in order to feed from its sap.

They would gather on the sixth night of the moon leading to the Winter Solstice (and the Summer Solstice) in order to harvest the Sacred Mistletoe with their golden sickle.

They would then sacrifice two white bulls.

These rites would allow the recipients of sprigs from the sacred plant to be protected by its magic powers. 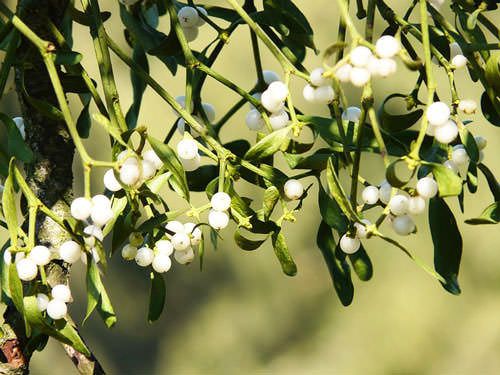 Frigga the Goddess of Love

These beliefs were rooted in an ever older Norse tradition.

North folks indeed believed that the Mistletoe was the Sacred Plant of Frigga the Goddess of Love and the mother of Balder the God of the Summer Sun.

One night Balder told Frigga that he dreamed of death.

Frigga became alarmed that all life on earth would stop if her son should died.

She, therefore, made a pact with the four elements air, water, fire and earth and with all animals and plants.

However, she forgot to include the mistletoe that grew neither on earth nor under the earth, but on apple and oak trees.

Loki the God of Evil took advantage of her mistake and made an arrow tip from the wood of the mistletoe.

He gave the arrow tip to Hoder the blind God of Winter, who killed Halder.

For three days the pale sky and all things on earth and heaven unsuccessfully tried to revive the dead God of the Summer Sun.

The tears that the desperate Frigga shed turned into the white berries of mistletoe.

The Goddess was so happy that she kissed everyone who would stand under the tree, where the parasite plant grew. 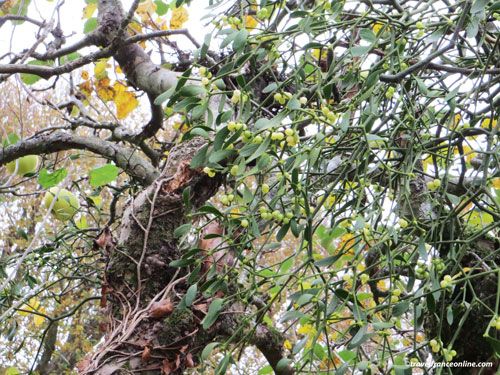 Mistletoe on an apple tree

Kiss me under the Mistletoe

They indeed used it during the Saturnalia when celebrating Saturn, their God of Harvest and Fertility.

Their tradition was later adopted by the first Christians who also adapted the legend of Frigga.

They indeed believed that a couple who would exchange a kiss under the mistletoe would be united by an eternal love.

This popular tradition was passed on from generation to generation and was still observed not that long ago!

In fact I know that it is still observed in many provinces.

However, I doubt if many French people know its origin.

They simply have fun and enjoy the moment.

Amazingly superstitions are still popular in certain regions of France.

Some still believe in the magic power of the mistletoe and hang sprigs in their homes in order to be protected against evil spirits.

The other Christmas plants traditionally used are the poinsettia, holly and ivy.