The French Alps are part of the Alps, a mountain range that formed between -252 and -66 million years ago.

The Alps spread over Austria, Germany, France, Italy, Slovenia, Switzerland, Lichtenstein and Monaco; they act as a natural and climatic barrier from the Danube to the Mediterranean.

Sadly, global warming has shrunk glaciers by as much as 30% since 1980; the snow indeed turns to rain during the winter, whereas it should melt during the summer to feed rivers and water tables.

The French Alps encompass 9 departments that are part of the Auvergne-Rhône-Alpes and Provence-Alpes-Côte d'Azur regions.

Mont Blanc, near the Italian border, rises to 4809m and is the highest mountain.

The name Alps derive from the Gaulish Alpe meaning the world from above.

Traces of human occupation date back 100,000 years ago, and many Neolithic artifacts, exceptionally preserved because of sub-zero temperatures, were found on several sites.

The most publicized discovery was that of Ötzi in 1991; the intact body of this hunter of the Copper Age was found in the Ötzals Alps, hence his name, on the border between Austria and Italy. 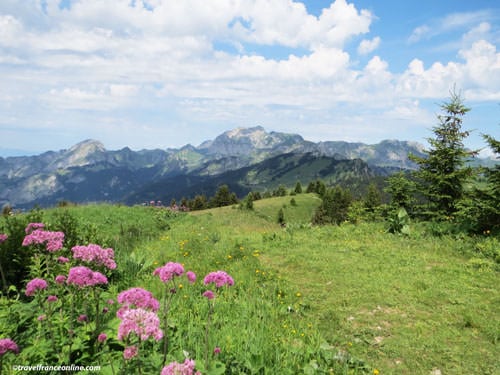 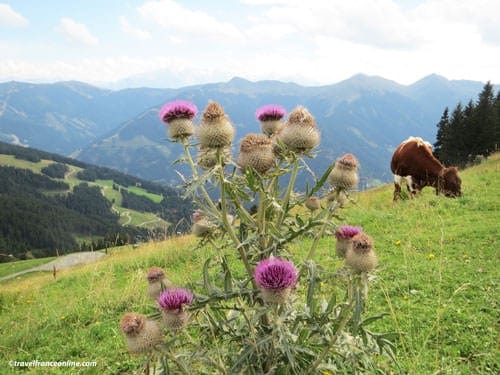 The French Alps flora is extremely varied and gathers some 4500 different species; however, they are protected and it's therefore forbidden to pick them.

This flora has various origins; the oldest plants appeared in the Tertiary Era and gradually adapted to the cold and altitude as the Alps rose during their formation.

Some plants appeared during the great glaciations, then migrated up the mountains when the climate warmed up; others adapted to the new climatic conditions.

Like in any other mountains, the French Alps flora varies with altitude, sun exposure, orientation and the nature of the soil.

There are five vegetation stages or ecosystems according to the elevation: collineum, mountain, sub-alpine, alpine and eternal snow.

The global warming of these last decades, however, affected their boundaries. 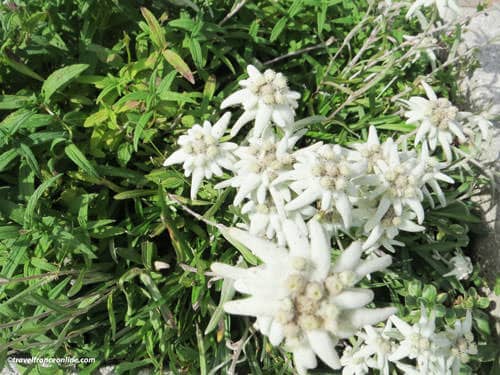 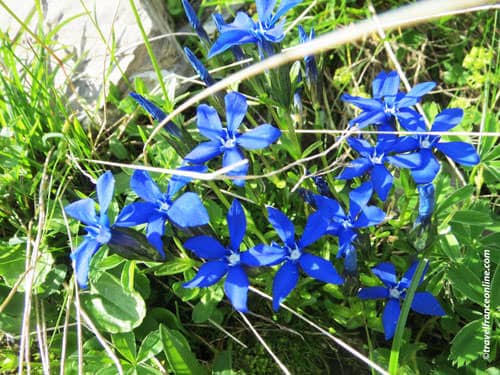 This level, which goes up to 800m in the Alps, is a region of hills, valleys and villages nestled among cereal crops, fields and vineyards.

The average annual temperature of 15°C allows a vegetative period of 8 to 9 months.

Deciduous trees such as oak, ash, Scots pine or chestnut grow easily; so do the many flower species that you normally find in the plain.

This is also where you’ll come across squirrels, beavers, deer and wild boars as you discover mountains roads and tracks.

This level goes from 800m and 1700m and boasts the largest variety of plants and trees.

This is the domain of deciduous species, especially beech, but also plane maple and sycamore, conifers with persisting foliage such as fir and spruce, and conifers with deciduous needles such as larch.

There is a wide variety of grasses, and flora is lush.

This includes the wild geranium, buttercup, clover, bell-flower, poet's narcissus, false hellebore and superb the yellow gentian that grows up to an altitude of 2500m.

You’ll also find the snowbell (soldanella) that grows between 900m and 3000m; very resilient to the cold, it’s one of the first flowers to bloom at the end of the winter.

And of course there is the Arnica that grows up to 3000m of altitude and blooms between May and June.

There are few villages on this level, but mostly scattered farms and barns because of the average annual temperature ranges from 8°C to 11°C.

This is the domain of deer, black grouse and the colourful great spotted woodpecker. 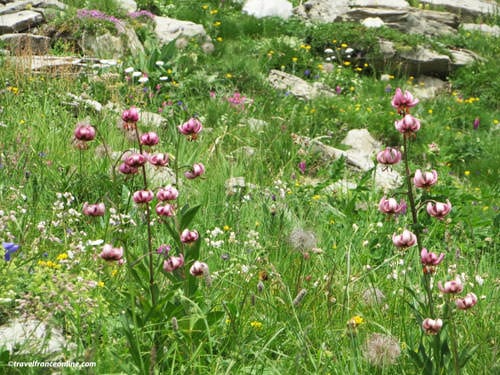 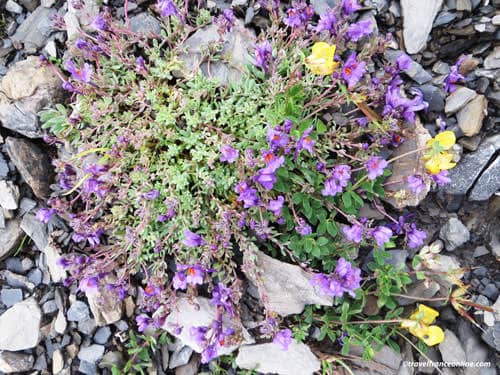 You'll find very few houses, but mostly shepherds' huts in the highland pastures, because the average annual temperature ranges from 4°C to 7°C.

This level boasts a great a variety of landscapes; wetlands, meadows and forests in the lower section and boulders and rocks at the upper level.

There are few deciduous tree species because of the cold that shortens the periods of vegetation, except for some birches and mountain ash.

The dense spruce forests that grow mainly in the lower section promote the development of mosses.

Mountain pine and larch grow in the upper level as they more resilient to cold, snow and shallow soils.

However, these forests develop at a slower rate and are clearer and thus promote the installation of herbaceous mountain plants.

On the other hand, the sub-alpine (pinus uncinata) grows where other species don’t, on steep slopes and burrs among heather and gold-edged winter daphne (daphne striata).

Over time, men transformed forest clearings in meadows and pastures where a wide array of bulbous species such as colchicum, crocus, alpine milkvetch, arnica and catsfoot thrive.

Wet areas are home to tall plants such as aconite, blue-sow-thistle, common thistle ...

You’ll also find the emblematic Blue Gentian that blooms between 1000m and 2000m, and the small yellow and brown lady's-slipper’s orchid, that blooms from May to July between 300m and 2000m.

Finally, this is at this level that you might encounter marmots, and even lynx or wolves if you are in a region where these last two species were reintroduced! 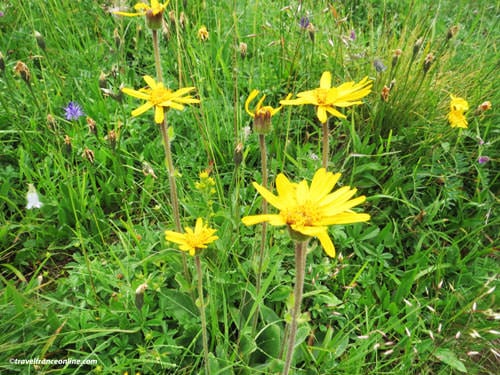 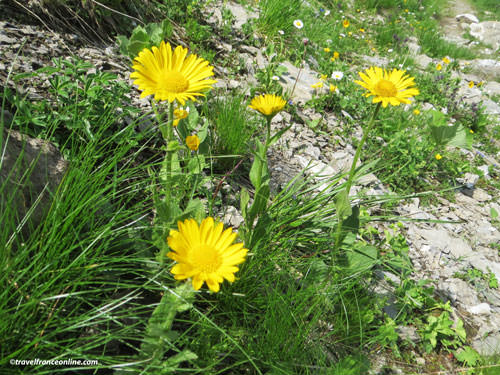 This stage goes from 2300-2500m and 3000m; it marks the tree-line, as the strong and cold winds and the snow prevent them from growing.

The Alpine Stage is thus the level of alpine meadows and rocks, the domain of the rock ptarmigan, ibex, chamois and ermine.

The plants that grow in altitude are generally dwarf and creeping with strong and deep roots to anchor into the ground and resist strong winds and unstable slopes.

Others grow in colony and in the shape of pads to contain the moisture.

They often have a cottony or fluffy aspect, like the edelweiss, to protect themselves from the winter cold and summer heat.

Plants that grow in unstable soil and scree areas must be able to regenerate quickly.

They are generally rhizome species with long stems, deeply anchored in the soil; these creeping plants reproduce by marcottage to survive in case of partial destruction.

These include the common houseleek, saxifrage and the wooly genepi that blooms from May to August between 2400m and 3000m among boulders and rocks.

You’ll also find the fireweed that grows in colony at an altitude of up to 2500m and blooms from June to September.

The Edleweiss or Ice Star, Snow or Silver Star is rare as it grows between the rocks out of reach, between 1700m and 3000m of altitude, and blooms from July to September.

Scree zones, however, are less hostile habitats than rocks as they retain soil and moisture.

They are home to the Martagon lily that grows up to 2800m and blooms in June.

You’ll also find the mountain rhododendron that withstands temperatures of -15°C and blooms from May to August up to 3000m of altitude!

Stabilized scree zones gradually turn into alpine meadows, propitious to the development of the blue moor-grass.

Between 2000m and 2500m you’ll find the Blue Thistle that blooms in July and August and can withstand temperatures of -25°C!

The depressions, where the snow accumulates throughout winter and melts late in the year, turn into moist areas where dwarf and fast-growing plants develop.

These are home to the dwarf soldanella, dwarf willow or the Alpine Veronica. 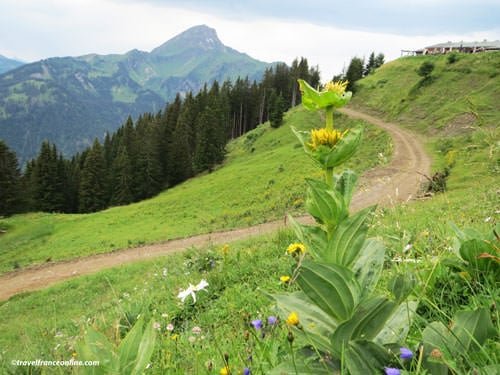 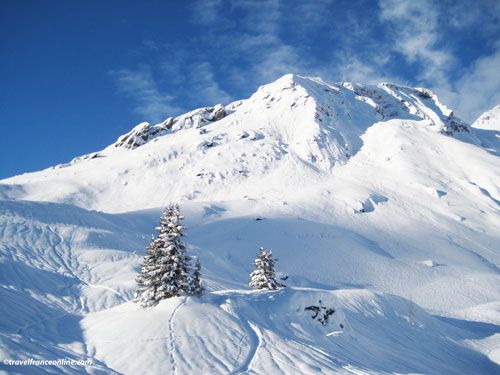 Finally, the highest stage is the domain of eternal snow.

Vegetation is extremely rare, except for few high altitude plants, such as the glacier buttercup, that grows in rock crevices and the alpine myosotis that grows up to 3600m from July to August.

At this altitude the nature of the rock, limestone or siliceous, has a tremendous influence on the type of plants.

The eternal snow stage is the domain of the yellow-billed chough and the almighty eagle, so keep your eyes open!