The man made Ile aux Cygnes

The Statue of Liberty Enlightening the World is obviously in New-York harbour.

But did you know that there're a several smaller replicas in Paris?

One these is located at the western tip of the Ile aux Cygnes.

It only 22m high, but it's still quite impressive and faces west, towards its 'big sister' beyond the seas.

Of course this is only a replica, but still a 22m high replica!

The Ile aux Cygnes is a man-made embankment.

It was built in 1827 in order to serve as point of reinforcement for the construction of three Parisian bridges.

It was renamed after the original Ile aux Cygnes was attached to the left bank during the construction of the Champ de Mars in the 18th century.

The original Ile aux Cygnes was home to a colony of swans imported from Denmark and Sweden by Louis XV.

The embankment was fully landscaped with 322 trees and bushes of 61 different species.

These included poplars, willows, ash, maples, chestnuts, walnuts and limes among others.

The Allée aux Cygnes is a pleasant tree-lined walk created in 1870.

It takes you all along this oasis of greenery right in the middle of the Seine!

The walk is very pleasant as there are always a light breeze and many benches placed here and there.

Access is done via Pont Bir-Hakeim and Pont de Grenelle. 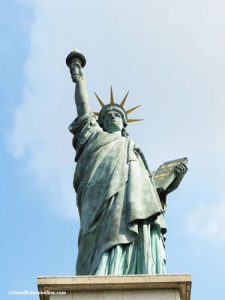 Statue of Liberty seen from the Left Bank

Replica of the Statue of Liberty in Paris

As you remember, France gave the Statue of Liberty to America on the occasion of the centenary of the American Independence of 1776.

The project was finalized in 1870.

Frédéric Auguste Bartholdi was commissioned with the creation of the sculpture.

He hired Viollet le Duc and Charles Garnier, the star architects of the time, for the creation of the metal frame.

Viollet le Duc died in 1879, so Bartholdi called upon Gustave Eiffel to take over the work!

Six-hundred workers were involved from 1875 to 1884 in the building of the statue.

Once completed, it was packed in 214 containers and shipped to New York!

President Cleveland unveiled the Statue of Liberty on October 28, 1886 in the presence of Bartholdi.

Many replicas were then cast and sent to various French cities, including Paris.

There are smaller replicas in the Jardin du Luxembourg, Musée d'Orsay and Musée des Arts et Métiers and of course on the Ile aux Cygnes!

This stunning bronze replica is a gift of the American community of Paris to the city of Paris on the occasion of the commemoration of the centenary of the French Revolution.

The statue now looks towards her 'big sister' in New York, but it originally faced east.

It was moved into its present orientation for the Paris World Fair of 1937.

The French president Sadi Carnot (who is buried in the Pantheon) unveiled the Statue of Liberty of the Ile aux Cygnes on Independence Day, July 4, 1889.

A slab commemorating the event was affixed on the base of the statue.

These dates correspond to the American Independence and Storming of the Bastille.

The area where the Statue of Liberty stands was fully renovated in 2012.

There are therefore a couple of benches and a public work-out area.

This area, sheltered under the Pont de Grenelle, is equipped with pieces of apparatus, climbing wall and fixed bikes among others.

Take the time of discovering the Ile aux Cygnes; it's one of Paris' best hidden secrets!