Saint Roch Church, one of the largest churches in Paris

Saint Roch Church is one of Paris largest churches.

Built over a century, it boasts a successful blend of architectural styles, however, the lavish Jesuit-Contre-Réformation or Baroque style is largely dominant.

Robert de Cotte started the construction of the main facade in 1653 and his son completed it in 1740, shortly before the consecration of the church.

Eight Doric columns adorn the lower section of this impressive facade and two groups of three Corinthian columns frame the triangular pediment of its upper section. 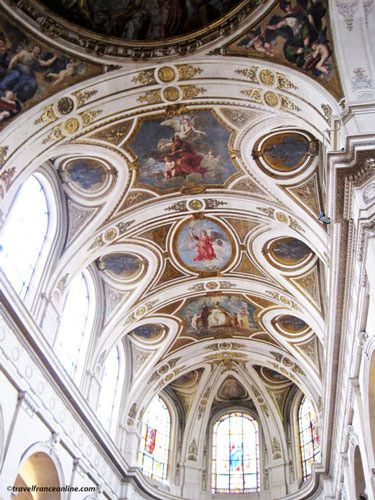 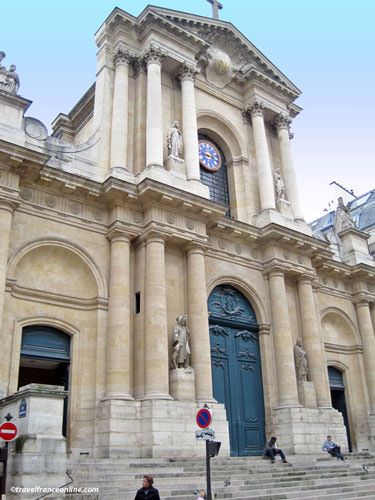 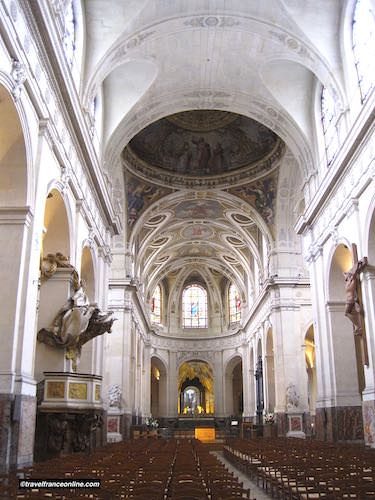 One of Paris' largest churches - nave

Saint Roch Church is located on the eastern end of Rue Saint-Honoré, the street that connects Rue de la Ferronnerie near Les Halles to the patrician Rue Royale.

The now prestigious street started as a muddy lane that led to the Forêt de Rouvray, the current Bois de Boulogne.

This lane was improved in the 12th century to serve the newly built Les Halles covered market and attracted artisans and merchants.

Among them were a thriving community of millers and bakers who erected several windmills on a hillock known as Colline Saint-Roch and named the street after Honoré, the patron saint of their trade.

The Rue Saint-Honoré became also the main axis between the city centre and the newly built Louvre Fortess. As a result, the western end soon became one of the wealthiest streets in Paris.

The windmills were demolished and the hilltop levelled in the mid-17th century to build Saint Roch Church. All that is left of that long gone era is a street name, Rue des Moulins (windmills lane.)

The eastern end of Rue Saint-Honoré remained popular. The western end was extended beyond the Louvre and became known as Rue Neuve-Saint-Honoré.

Later renamed Rue du Faubourg Saint-Honoré, it attracted the affluent classes, the courtiers and the aristocracy. 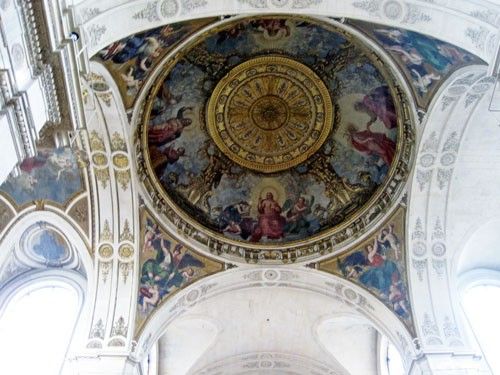 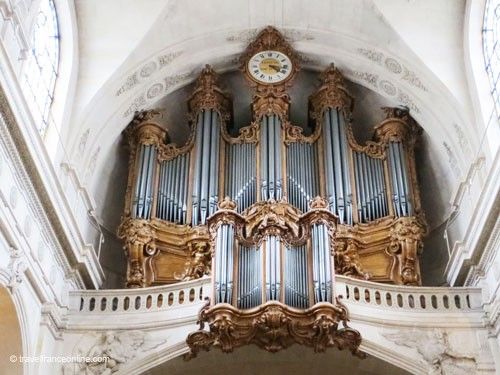 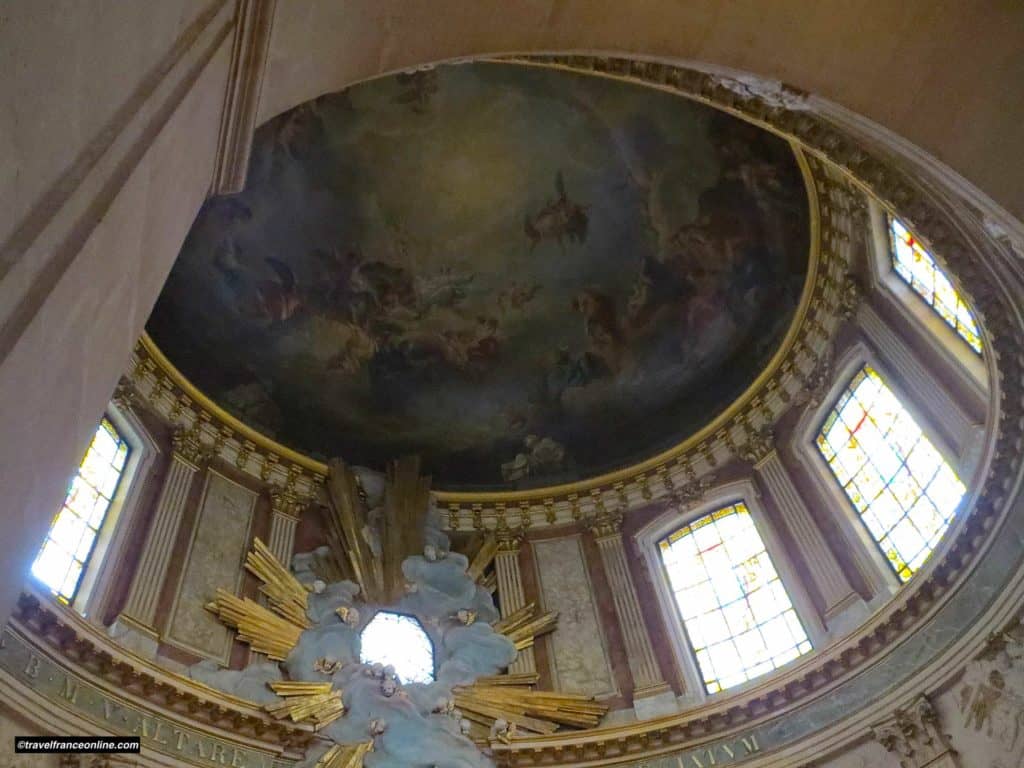 Saint Roch, a patron saint who protected people against the plague!

Windmills were not the only buildings on the Colline Saint-Roch, as there was also a chapel dedicated to Sainte-Suzanne, the patron saint of market gardeners and tile makers.

These active corporations had indeed settled there because of its proximity to the Louvre where they found work in abundance.

However, this overcrowded district became a permanent source of epidemics and the chapel became too small.

King Louis XIV therefore commissioned the architect Lemercier with the construction of a new church dedicated to Saint-Roch.

Not only was Honoré the patron saint of the millers and bakers, but he also protected them against the plague!

The king laid the first stone of Saint Roch Church in 1653. However, the construction took over a century because of the lack of funds.

The windmills gone, there were no more millers nor bakers to subsidise it! 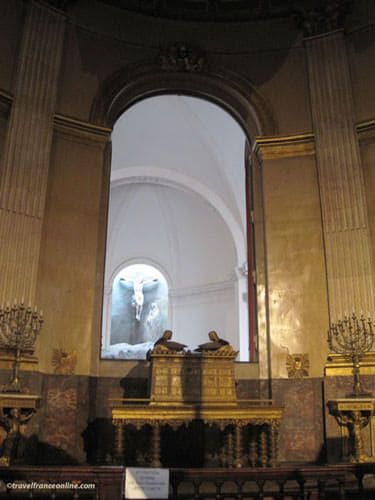 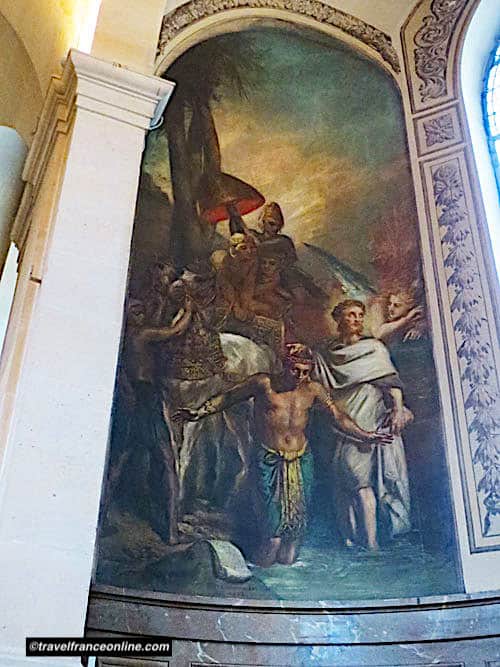 The architects of Saint Roch

Several architects contributed to the construction of Saint Roch Church; each added a chapel with cupola around the chancel.

Francois Mansart built the vast and oval Chapelle de la Vierge in 1709. The chapel is adorned with a splendid Nativity and its cupola is painted with a scene representing the Assumption.

The Chapelle de l'Adoration was built in 1717 with a legacy left by banker Law.

The Chapelle du Calvaire was built in 1754 in accordance with the original plans drawn by the architect Falconet. It replaces the church's old cemetery.

Saint Roch Church boasts a wealth of exceptional paintings and frescoes by Coustou, Coysevox and Chassériau (St-Francois-Xavier baptizing the Indians in the Chapel of the Baptismal Font).

Finally, it also contains various exceptional mortuary artefacts, statues and graves. Among those you'll find the mausoleums of the landscape gardener Le Nôtre, the philosopher Diderot and the dramatist Corneille.