Rue de la Gaite, which literally translates into Good Humour St., has been devoted to entertainment since the late 18th century.

This 300m long street parallel to Montparnasse Cemetery is lined with theatres and restaurants.

It started as a country lane that linked the village of Clamart in the south of Paris to the Barrière Montparnasse.

This toll gate was part of the Wall of the General Farmers where people paid customs taxes before entering Paris to sell their products.

The Barrière Montparnasse stood on Place Denfert-Rochereau where the two pavilions which housed the customs staff still stand.

Both are today listed Historical Monument and one serves as an entrance to the Catacombes, Paris underground necropolis.

Drinking establishments appeared soon on the outside of the fiscal wall to avoid customs taxes on drinks.

They became known as guinguettes as they served guinguet, a sour and cheap white wine produced from the many vineyards cultivated on the hillsides of the Seine Valley.

The Wall of the General Farmers was demolished at the start of the Revolution and although in use for only 10 years gave birth to a unique enclave.

Within two generations, the Rue de la Gaite evolved from a country lane into a lively street dedicated to day and night entertainment!

Many of these establishments acquired a reputation which lasted until the 20th century. 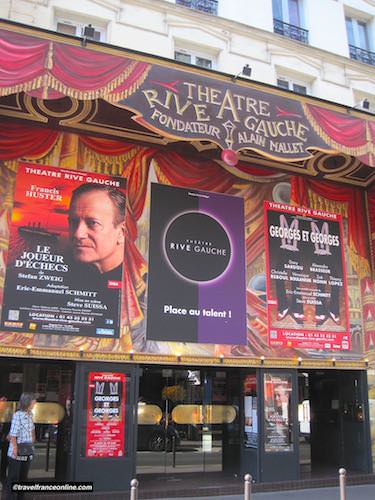 Indeed, by the 1900s the Rue de la Gaite was essentially lined with bistros, theatres and entertainment halls, among which Le Bal des Quatre Saisons and Bal des Mille Colonnes.

La Comédie Italienne (recognizable for its stunning blue facade) was transferred at No. 17-19 from Avenue du Maine in 1980.

Rue de la Gaite became such an iconic Parisian entertainment spot that it was classified among the city’s heritage streets in 1863.