Les Catacombes take you down into the deep of Paris underground and its maze of galleries.

Those are lined with small crypts stacked with more than six million skeletons, the remains of generations of Parisians.

It replaces the Barrière d' Enfer, one of the tollgates on the Wall of the General Farmers erected in the late 18th century.

These buildings are now listed Historical Monuments and one serves as entrance to the Catacombes. 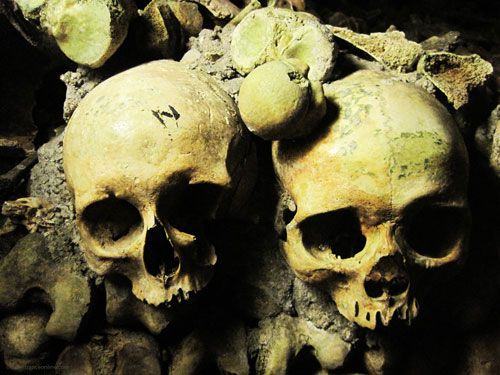 Some of the 6 million skeletons 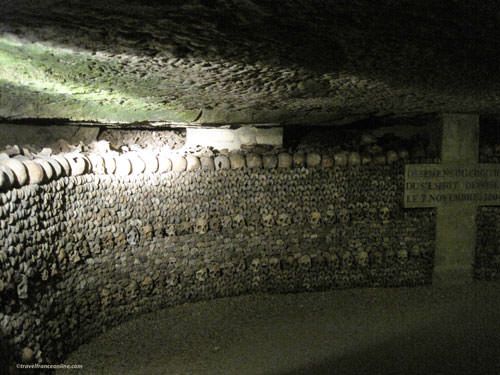 Why store skeletons in the underground of Paris ?

It developed steadily through the centuries on the two banks of the river Seine.

By the 18th century, the old villages had become proper districts.

Their cemeteries, once outside the city limits, were in the direct vicinity of dwellings and workshops.

They were exceeding their original capacity and generated obvious and severe problems of sanitation!

The largest and oldest of these urban cemeteries was the Cimetière des Innocents, near Les Halles, which had been in use since the 10th century.

The State Council ordered the closure of the cemetery in 1780, before major epidemics spread.

The bones were transferred to old underground quarries located in the south of Paris, an area then sparsely populated.

The Catacombes were officially blessed and consecrated in 1786.

Over six million skeletons were transferred from the other Paris cemeteries in the years that followed.

This included among others the remains from St-Eustache, St-Landry and St-André-des-Arts parish churches.

However, it also included those of the people killed during the various political conflicts that gripped Paris between 1788 and 1792.

The Catacombes were enlarged and restored between 1810 and 1811, and open to guided tours. 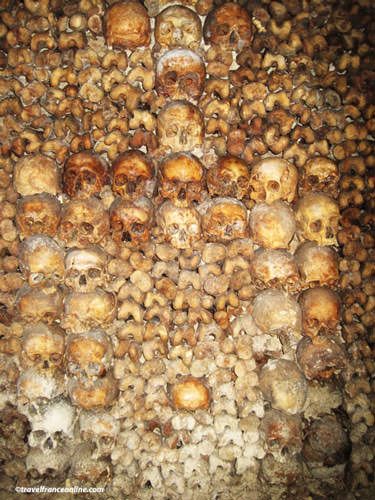 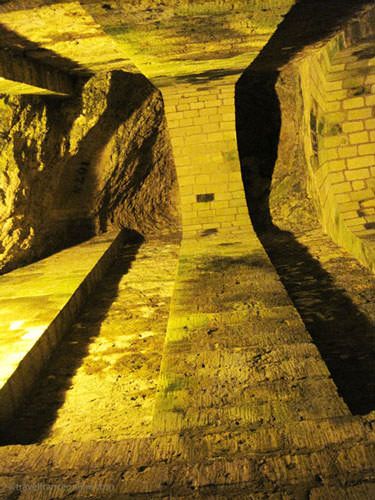 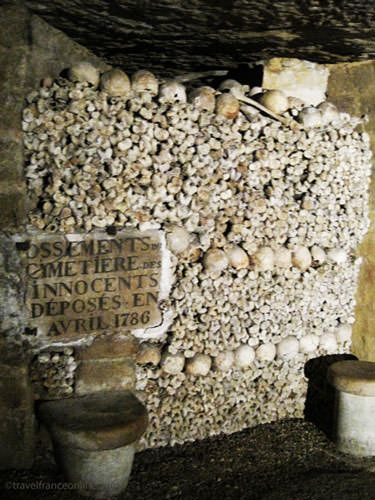 Skeletons from the Cimetiere des Innocents

The bones were piled up in order to create decorative patterns and make the necropolis look less dreary.

Skulls, tibia and femurs produced patterns that differ from a crypt to another.

Nothing macabre, just a different approach to death...

The bones from the Cimetière des Errancis were transferred during the Bourbon Restoration.

The revolutionaries opened this cemetery in haste (near Parc Monceau) to bury the bodies of 1,119 people they guillotined during the Revolution.

Among the bones transferred there were those of Danton, Robespierre and Madame Elisabeth, the sister of Louis XVI .

La Madeleine and Saint-Jacques-du-Haut-Pas were the last cemeteries to become disused in 1850. 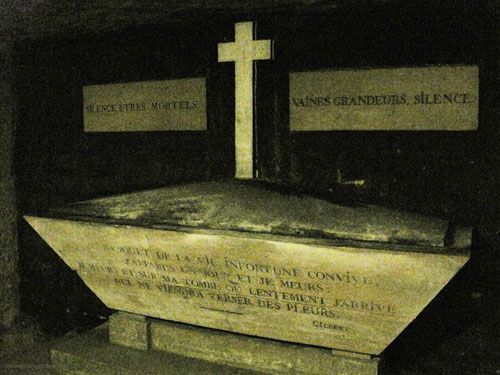 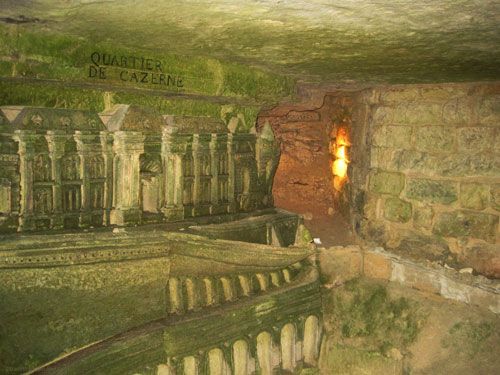 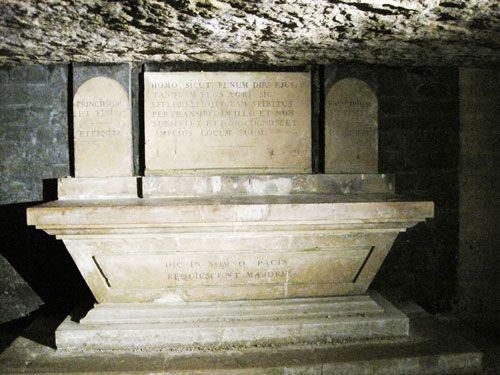 Stop, Here starts the World of the Dead

A 90-step stone spiral staircase takes you down to the depth of the underground necropolis.

This verse by the poet Jacques Delille (1738-1813) is carved on the lintel above the entrance door to the ossuary.

It greets the visitors as they set foot into the Kingdom of the Dead.

Once passed the door, you’ll discover the crypts, but also some unusual funeral monuments and objects.

The bones recovered from each cemetery were stored in a separate crypt marked with the name of the cemetery of origin.

Poems and dedications to the Dead

The workmen who converted the galleries in the early 19th century also carved the walls  with inscriptions and poems, presumably to encourage the visitor to reflect on Death.

A small circular basin was named Fontaine de Léthé or Fontaine de la Samaritaine and engraved with some verses of the Gospel.

The Autel de l'Obélisque, located in the Sacellum Crypt, was made to resemble an ancient tomb.

The Crypte du Piedestal de la Lampe Sépulcrale contains the bones of Saint-Laurent Cemetery; it was the first monument built in the Catacombes.

The Sarcophage du Lacrymatoire is a reinforcement pillar shaped like a burial vault.

This funeral monument is also known as Tombeau de Gilbert in reference to the verses that Nicolas Gilbert wrote a week before dying.

Amazingly, the poet was not buried in the Catacombes.

Another pillar contains the heart of Gal Toussaint Campi, who died in 1832. 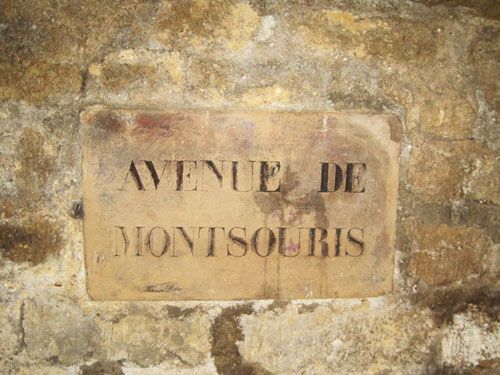 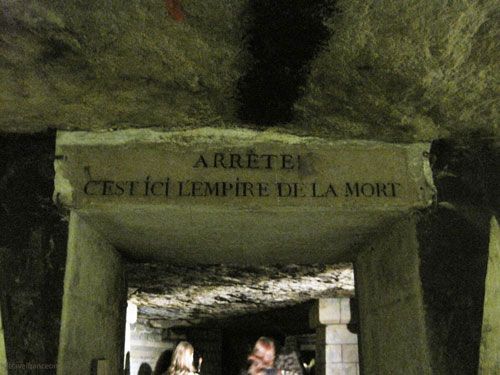 Here starts the World of the Dead 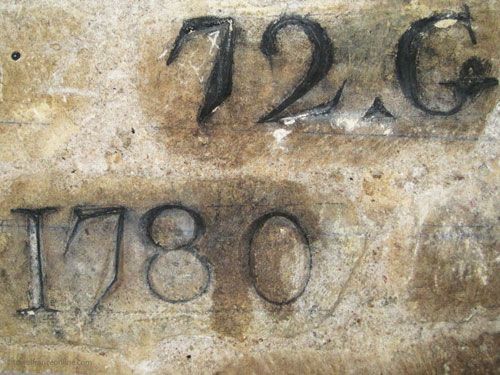 You’ll also come across a well dug by the men during the restoration of the old galleries.

Its turquoise water brings a note of colour in this world of darkness.

However, the most famous feature of the Catacombes is undoubtedly the model of the Fortress of Fort-Mahon.

The veteran served under Louis XV then worked on the consolidation of the underground quarries.

Tragically, he was killed in the landslide of one of the galleries shortly after completing his amazing sculpture.

On the way out, you’ll walk through two 11m and 12m high sinkholes or Fontis caused by a localized collapse of the superior layers of underground galleries.

They'll give an idea of the vacuum on which Paris' houses were built!

That said, don't worry as the Catacombes are subject to constant monitoring to ensure the total safety of the public.

They've never ceased to fascinate the crowds since their opening, however, be aware that their visit is not for everyone!

Young children and emotive people might be impressed by the darkness of the galleries and the millions of skulls and bones.

Note: Flash photography is forbidden in the galleries.