The Port de Dinan Lanvallay is located along the river Rance.

The Rue Haute-Voie, Rue du Petit-Fort and Rue du Jerzual link the port to the historical citadel of Dinan.

The Port de Dinan Lanvallay is a today an active marina.

Boat trips to the fortress of St-Malo and the Channel Islands or simply on the river the Rance therefore generate a constant flow of traffic.

A multitude of yachts and sailing boats are moored along the Quai Tallard and display their white sails for the pleasure of all.

Many traditional restaurants and crêperies line the quay and offer a prime view of the port.

This is where you'll find the Maison d'Artiste de la Grande Vigne, the home of the painter Yvonne Jean-Haffen (1895-1993).

The town of Dinan purchased the house in order to convert it into a museum in situ.

It also converted the old redundant towpaths in walks that will take to the nearby Abbey of Léhon.

For centuries Le Vieux Pont was the only bridge in Lanvallay.

This magnificent stone bridge is in perfect state of maintenance and boasts superb views of the Rance and its banks.

However, only pedestrians and light weight vehicles can use it.

Indeed, by the early 19th century Le Vieux Pont was already too narrow and too weak to sustain constant and increasing traffic.

A new bridge was needed.

The first stone (grey granite) of the Viaduc de Lanvallay was therefore laid on September 3, 1846.

Ten arches support the 250m long x 40m high viaduct which connects Lanvallay, on the hillside, to the wall city of Dinan on the opposite side.

No need to say that the viaduct made a huge difference to local traffic.

It indeed bypasses the Port de Dinan Lanvallay and therefore diverts traffic from the Vieux Pont.

It also avoids the ascent of Rue du Petit-Fort.

The cobbled street was indeed the only  pedestrian and vehicular access from Lanvallay to Dinan! 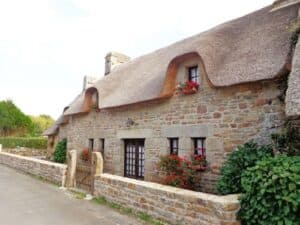