St Malo is situated on the Côte d'Emeraude, at the boundary of Brittany and Normandy and a stone's throw from the Channel Islands.

The fortress defended the eastern bank of the Rance estuary and the fort of Dinard the western bank.

In the 1st century AD, the Romans built a fort for their garrison at Aleth - present day St-Servan district.

The site, known as Reginca, left its name to the river Rance.

The Frank and Saracen incursions of the 5th century forced the inhabitants to retreat on a rocky peninsula.

Connected to the mainland by a sandy strip - Le Sillon - it was indeed easier to fortify and defend.

McLow-Maclou-Maclovius-Malo, a preacher monk from Wales, landed on the shores of Aleth in the 6th century.

St Malo became Bishop of Aleth, one of the seven bishoprics of Brittany.

The Episcopal seat and the holy man's relics were transferred from Aleth to the fortified peninsula during the 12th century.

The peninsula of St. Malo became a haven and a free city exempt of custom duties.

The influential Episcopal city's territory extended to Haute-Bretagne and the bishops retained temporal power until the French Revolution. 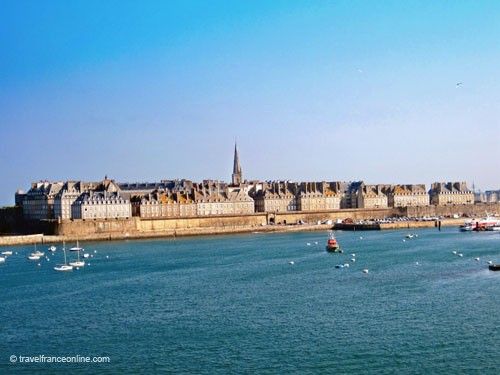 St Malo, the City of Privateers

Located at the boundary of Brittany and Normandy and by the Channel Islands and protected from the sea by Le Sillon, St Malo was a much coveted maritime city!

In the 9th century, ship-owners therefore armed their ships in order to protect their cargoes from the Viking raids.

This led to private naval battles and retaliation carried out in peacetime.

St Malo Admiralty kept the race war under control by designating allied and enemy nations and enforcing periods of truce.

However, the race war took a new dimension during the Hundred Years War.

Indeed, the English fleet was anchored in the nearby Channel Islands and attacked St Malo in the early days of the conflict.

However, not only did they fail to put an end to the race, but they also gave St Malo ship-owners a legitimate reason for intensifying the race.

The Malouin privateer tradition was born! 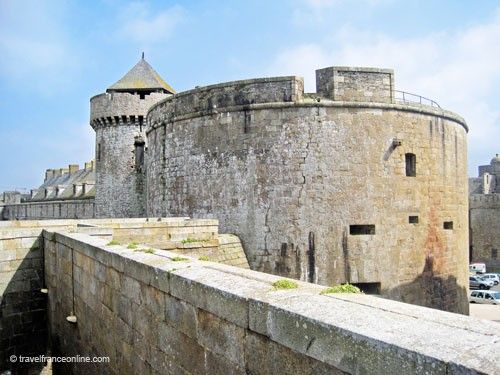 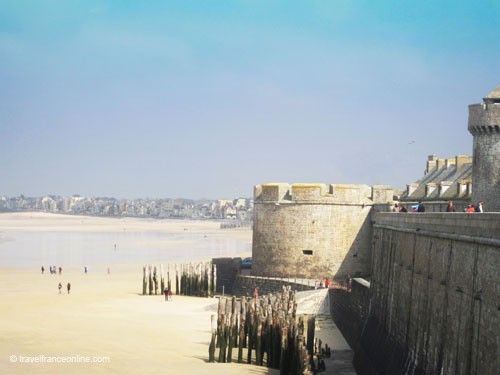 Place under the sponsorship of the kings of France, it thrived until the 17th/18th century.

In the late 17th century, Marshal Vauban indeed convinced Louis XIV that this was a marvelous opportunity to fight the English and Dutch on the seas!

The rules of sharing the spoils were established as follow: 1/5 for the king, 1/10 for the Admiral of France, 2/3 for the ship-owner and the rest for the crew!

Malouin ship-owners were therefore accredited by the French Admiralty and made their fortune!

They were given patent letters that allowed them to officially dock and capture enemy ships that had the misfortune of crossing their path!

However, being a privateer became more challenging in the mid-17th century as the English Channel was very much under British rule.

English ships were indeed anchored on the south coasts of England and in the Channel Islands, a few miles from the French coasts.

The race war officially ended on April 16, 1856 with the signing of the Treaty of Paris, a collateral agreement, which redefined maritime rules.

So what is the difference between pirates and privateers?

Privateers were officially attached to the service of the King of France.

Every Malouin will tell you that no pirate ever sailed out of St Malo! 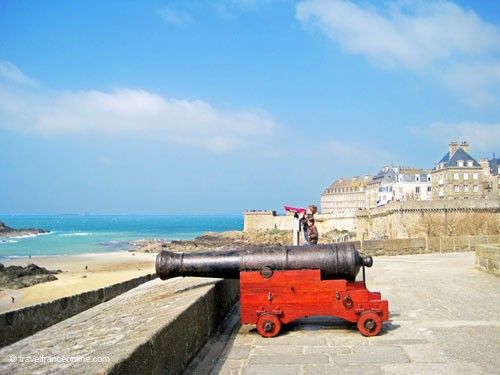 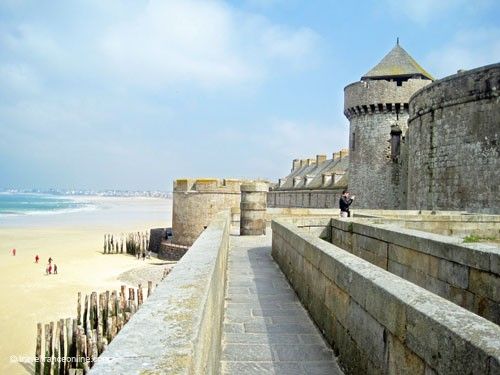 St Malo, part of the Duchy of Brittany

Back to the 13th century, St Malo was part of the almighty Duchy of Brittany, which was an ally (but not a vassal) of the King of France.

However, the Pope gave St Malo to the King of France in 1395 during the War of Succession of Brittany.

St Malo was attached to the Crown of France in 1493, two years after the Duchesse Anne de Bretagne married King Charles VIII.

Anne fiercely kept control of her duchy, but Brittany (and St Malo) definitively became part of the Kingdom of France in 1532. 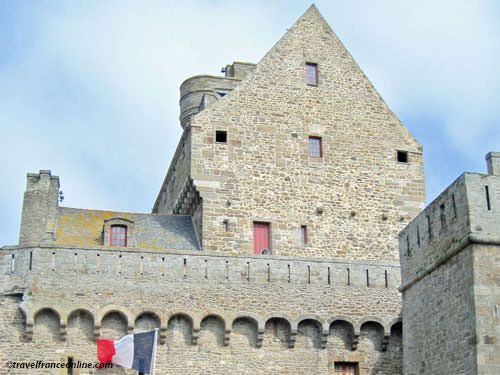 The Republic of St Malo

The Malouins have always been very proud of their independence and catholic roots.

They therefore rebelled when the Protestant Henri IV became king of France in 1590.

They indeed retreated in the Chateau Gaillard and proclaimed the Republic of St Malo in order to establish their independence from the French Crown.

This is when the city's famous motto appeared:

From St Malo to Newfounland

The great expeditions of the 15th century led to the discovery of new continents and subsequently allowed for the development of maritime activities.

John Cabot (who was commissioned by the King of England) discovered the Grand Bancs de Terre-Neuve in 1497.

The Grand Banks of Newfoundland are a series of shallow underwater plateaus particularly rich in cod and considered one of the most important fishery area in the world.

Malouin sailors started to fish in the Newfoundland waters in the early 16th century.

They left for months on their sailboats called Terre Neuvas ou Terre-Neuviers; many even settled on the nearby St-Pierre et Miquelon Islands.

In 1764, the explorer Bougainville visited the Falklands, a group of islands  discovered by John Davis in 1592.

Bougainville renamed them Malouines Islands as sailors from St Malo had been the first to permanently settle there. 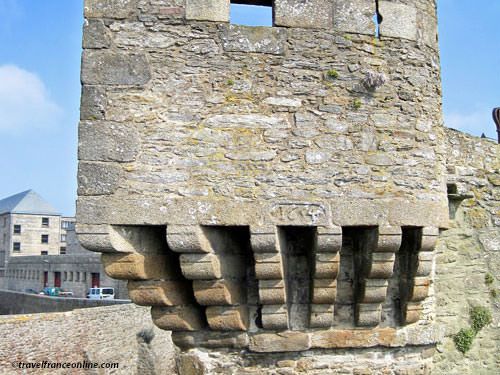 King François I commissioned Cartier to explore the northern shores of North America.

Cartier therefore sailed from St Malo in 1534 and discovered Canada.

St Malo is very proud of the King's Privateer who in 1711, and at the head of nearly 300 merchant vessels and several warships, seized the bay and harbour of Rio de Janeiro.

Louis XIV rewarded him for his achievements by appointing him Lieutenant General of Naval Forces of France.

Duguay-Trouin's ashes were brought back from Paris in 1973 and laid in St-Vincent Church in order to celebrate the bicentennial of his baptism.

Born into a family of ship-owners, Surcouf was put out to sea at the age of 13 and became a master mariner at 21!

He began a brilliant career as corsair during which he succeeded in capturing 47 ships and their cargoes.

This feat earned him the nickname of Tigre des Mers - Tiger of the Seas!

However, the feat that made him a living legend, was the capture of the Kent in 1800.

Indeed, he and his crew of only 130 men succeeded in neutralizing the impressive English warship of 38 guns and 400 men!

Surcouf later retired as a ship-owner and ended his days peacefully on land!

His statue watches over the sea from the Cavalier des Champs-Vauverts gardens. 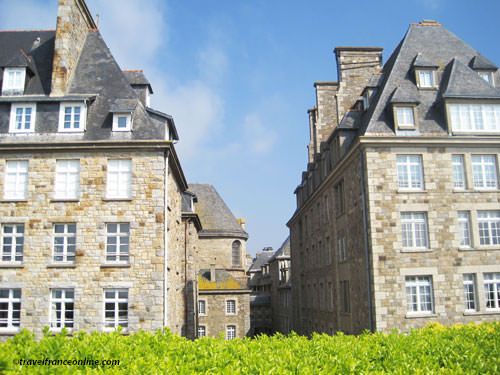 St Malo has always been enclosed within tall ramparts.

The Porte St-Thomas opened onto the Sillon and the Grand' Porte led to the port.

Marshal Vauban built the current ramparts between 1700 and 1737 in order to increase the size of the city.

The castle, Château Gaillard, was erected in the 13th century and altered by Vauban.

The terrace roof boasts a superb view over the city and the surroundings coastal towns.

The castle' other tower is known as Tour Quic-en-Groigne.

Narrow and straight lanes laid out on a grid plan crisscross the inner city.

An impressive alignment of mansions follows the layout of the rampart.

The section of rampart running from the Bastion St-Philippe to the Tour Bidouane boasts a superb view of the sea, seashore and surrounding islands.

The spire of the Cathédrale Saint-Vincent dominates the walled city.

It boasts a series of stunning stained glass windows, created by the famous glaziers Jean le Moal and Max Ingrand. 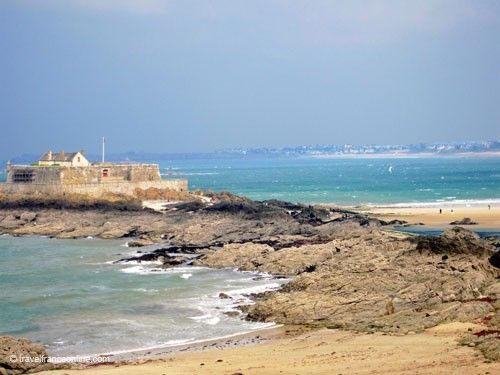 A few islets can be seen offshore.

In 1689 Vauban built two forts on the two closest islets in order to control the Rance estuary and the open sea.

The Fort National was known as Fort Royal until the French Revolution.

Situated on the eastern side, by the castle, it boasts extensive views over the sea and the coastal towns.

It is only accessible at low tide, yet you still get wet feet as the causeway is often under shallow water!

This is where François-René de Chateaubriand, born in St-Malo in 1768, chose to be buried in 1848.

The unassuming tombstone of his lonely grave bears the following epitaph:

" A great French writer wanted to rest here,
to listen only to the sea and wind.
Passerby, respect his last wish"

The reconstruction of St Malo after WWII

The impressive fortress was almost entirely destroyed during WWII.

The Germans indeed installed an important armed garrison and turned the old fortress into a major bastion on the Atlantic Wall.

All that was left when the Germans capitulated on August, 14, 1944, was a heap of ashes and ruins.

However, Vauban's massive ramparts had resisted!

St Malo was rebuilt to the identical from 1948 to 1960, but the bell tower of St-Vincent Cathedral was completed in 1972.

The modern city has recovered its maritime vocation by developing a vast marina.

This harbour consists of a set of lakes linked to the sea by locks and connected by causeways.

St Malo has also successfully promoted its seaside tourism and has become a major holiday destination.

People come to visit the old citadel and sail or enjoy its fine sand beaches.

La Plage du Sillon is considered once of the finest beaches in Brittany.

Finally, St Malo is a major ferry terminal serving Poole, Portsmouth and Weymouth in the south of England via the Channel Islands.