The foundation of Notre Dame Cathedral

Notre-Dame Cathedral is a masterpiece of Gothic architecture!

The 130m long by 35m wide building can accommodate 9,000 people! It carried throughout the centuries the spiritual and religious heritage of the people of Paris and generations of kings, queens and emperors.

In 375AD, a chapel dedicated to St. Etienne, replaced the Temple of Jupiter the Romans had erected 4 centuries earlier. In 528AD the Merovingian King Childebert built a second chapel, dedicated to Notre Dame, on the site of the current sacristy.

By the 12th century the two buildings had unfortunately fallen into ruins.

In 1163 the Bishop of Paris, Maurice de Sully, therefore commissioned the construction of Notre Dame Cathedral. The work lasted from 1165 to 1230 and the altar was only consecrated in 1196.

As a result, Notre-Dame's architecture is a perfect illustration of Early Gothic.

The flying buttresses were built during the 14th century to reinforce the structure and create lateral chapels. So was the gigantic rose windows that allows light to pour into the nave.

Notre Dame Cathedral was fully completed in 1330. Generations of artisans, workers and common people, whose names were lost in the mists of time, contributed to its construction.

However, we know that they worked under the direction of the most famous master-builders of the time: Jean de Chelles, Pierre de Montreuil, Jean Ravy and Jean le Boutellier.

Surprisingly, the name of the architect of Notre Dame Cathedral is unknown. 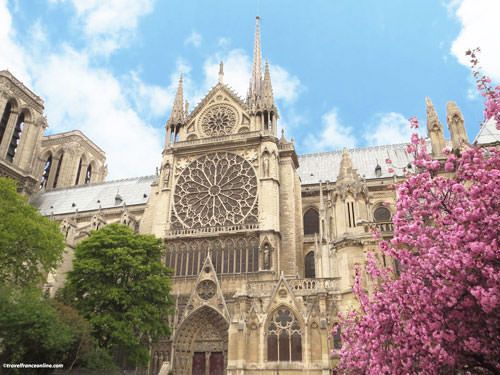 Sadly, the building was damaged and looted during the French Revolution and all the bells, but one, were melted.

Notre Dame Cathedral was therefore in a pitiful state when Napoleon I was crowned in 1804. Heavy tapestries indeed covered the walls to conceal the many holes and cracks.

Victor Hugo saved Notre Dame Cathedral when he published The Hunchback of Notre Dame in 1831.

He indeed launched a series of petitions that made the public aware of the disastrous state of the cathedral. The French State allocated necessary funds for its restoration and commissioned the architect Lassus.

Viollet-le-Duc took over after Lassus's death in 1857, and devoted 25 years returning the cathedral to its beauty and grandeur of 1330!

Notre Dame Cathedral fortunately escaped the devastation of the Commune of Paris in 1871 (the torch the revolutionaries threw in the building could not be lit!)

As you know a fire a fire broke up on April 15, 2019, and destroyed the roof and the spire... years will be necessary to rebuild our magnificent cathedral! 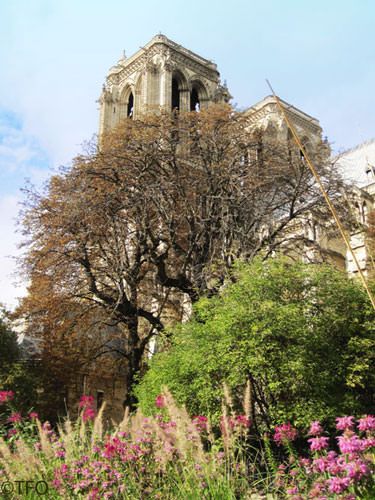 Seen from the gardens 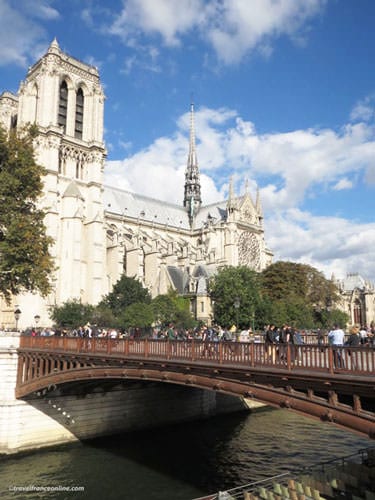 The construction of the impressive facade began in 1200 and was completed in 1270.

They project towards the sky as if to symbolise the elevation of the human soul towards God and boast finest views over Paris. 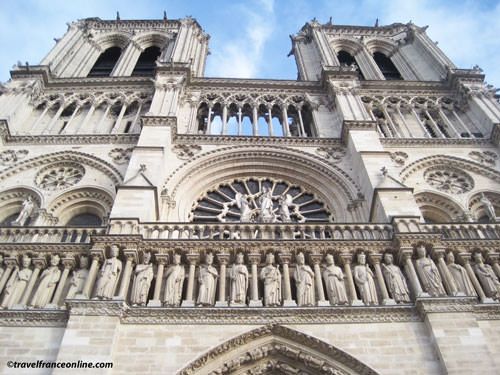 An impressive sculpture of Christ seated on His Throne of Majesty adorns the tympanum.

The low reliefs below represents the Dead that are resurrected and the Archangel St Michael weighing their souls.

The lower low relief represent their souls being directed either to Heaven or to Hell.

The arches that frame the tympanum are sculpted with angels, prophets, martyrs and virgins; they end above the statues of the Twelve Apostles.

The portal was severely damaged during the French Revolution but was restored and new statues sculpted. The buttresses framing the portals are adorned with statues representing St-Etienne, St-Denis, the Synagogue and the Church. 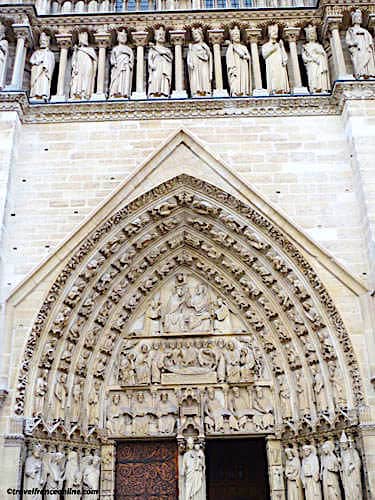 Portal of the Virgin 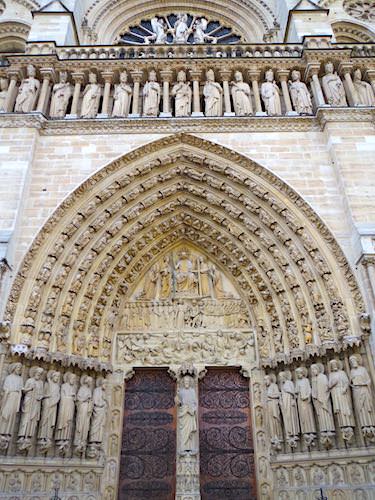 Portal of the Last Judgement 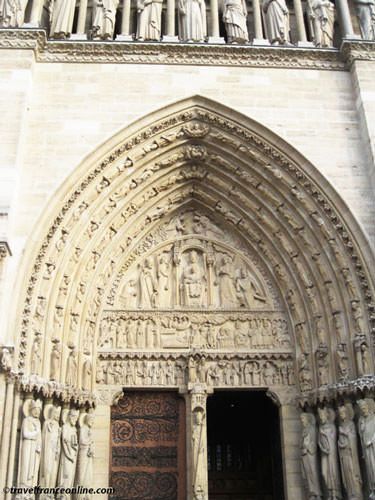 Sainte Anne Portal is the oldest of the three portals.

The tympanum, recovered from St Etienne Church, is decorated with a sculpture of the Virgin with Child. Mary is seated on a throne guarded by an angel on each side.

The Bishop of Paris is represented standing to her right and the King of France to her left.

The upper low relief is sculpted with scenes from the wedding of Joachim, and that of Mary and Joseph.

The lower relief is dedicated to the arrival of Christ on earth from the Annunciation until the Epiphany.

The arches framing the tympanum are carved with statues of prophets, martyrs, angels and Elders of the Apocalypse.

Eight statues representing the Queen of Sheba, Saint Peter, St Paul, King Solomon, King David, two unidentified kings and Bathsheba stand below the arches that frame the portal. These statues date from the 19th century restoration, as the original were destroyed during the Revolution.

The Portal of the Virgin is dedicated to the Virgin's death and ascension to Heaven and her coronation as Queen of Heavens. She is represented in Heaven sitting next to Jesus who crowns her Queen.

The upper low relief shows Mary on her deathbed.

The lower low relief depicts 3 prophets and 3 kings of the Old Testament seated on either side of the Ark of Covenant. 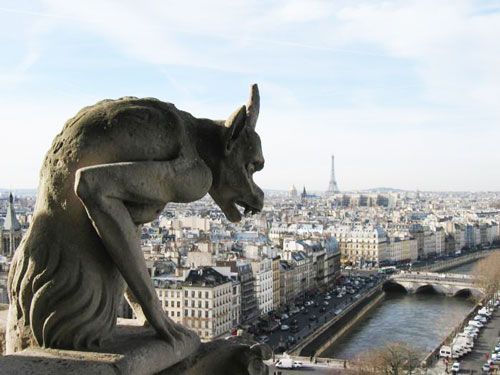 Notre Dame Cathedral had 20 bells before the French Revolution:

Cardinal Vingt-Trois, the Archbishop of Paris consecrated the new bells on February 2, 2013. They rang for the first time on March 23, 2013.

Only Emmanuel, the 13-ton bourdon bell and centre piece cast in 1686 was spared from destruction.

Napoleon I commissioned its replacement in the South Tower (1802). It is said that its unique sound comes from the gold and silver jewellery donated by wealthy parishioners who funded its cast. Emmanuel is today a listed Historical Monument.

The small bourdon was named Marie, in honour of course the Virgin Mary, but also in remembrance of the original bell cast in 1378. New "Marie' was cast in the Royal Eijsbouts foundry in the Netherlands.

The four bells installed in the North Tower in 1856 were considered of poor quality. They were therefore replaced for the celebrations of the Chemin du Jubilé celebrations in 2013.

The Cornille-Havard foundry in Villedieu-les-Poëles in Normandy produced these new bells.

Gabriel was of course the name of the archangel who announced the birth of Jesus to the Virgin Mary. It was also the name of the North Tower’s largest bell during the 15th century.

Denis was named in honour of Saint Denis, the first bishop of Paris (250AD) and patron saint of the diocese.

Etienne was named after the first martyr of the New Testament.

Maurice was named in memory of Maurice de Sully, the 72nd Bishop of Paris (1160 to 1196) who initiated the construction of Notre Dame Cathedral in 1163.

Finally, Jean-Marie was named after Cardinal Jean-Marie Lustiger, who was the 139th Archbishop of Paris from 1981 to 2005. 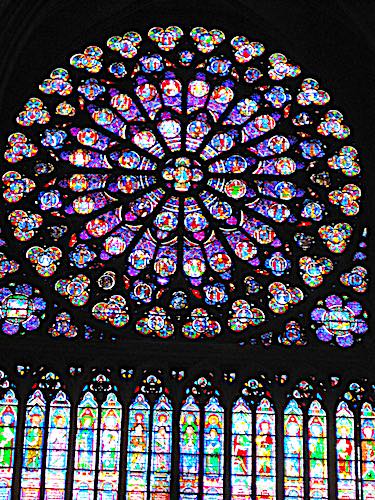 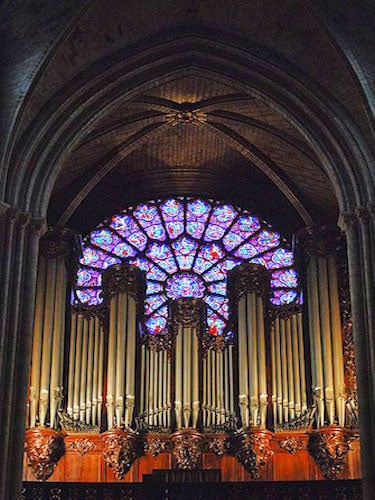 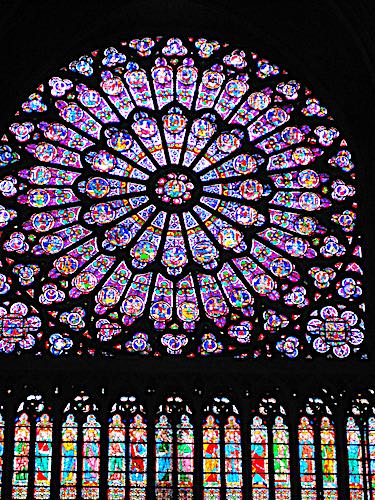 Jean de Chelles laid the first stone of the south transept’s facade in 1258. The rose window was created in 1260 to match the north rose window.

The south rosette depicts the New Testament, with Christ triumphant and ruling in Paradise; its base is adorned with the prophets.

It is made of of 84 panels distributed in 4 circles. The first circle has 12 medallions, and the 2nd 24; the 3rd circle is composed of quatrefoil-shaped patterns, and the 4th circle of 24 medallions with quatrefoils. The number of circles, patterns and medallions are all multiples of 4.

The rose window was rebuilt in 1543 to correct the sagging of the stonework triggered by the lack of maintenance. It was restored in 1723 and 1727.

It was damaged during the Revolution of 1830 and was rebuilt a few decades later.

A section was rebuilt as the stonework had collapsed and the rose window was turned 15 degrees in order to re-balance it. Some motifs and medallions damaged or missing along with those depicting the prophets at the base had to be recreated.

The western rose window marks the centre of the main facade. It has a diameter of 9,60m and is the largest stained-glass created during the 13th century. 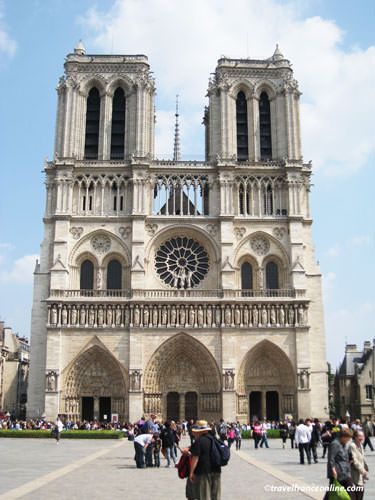 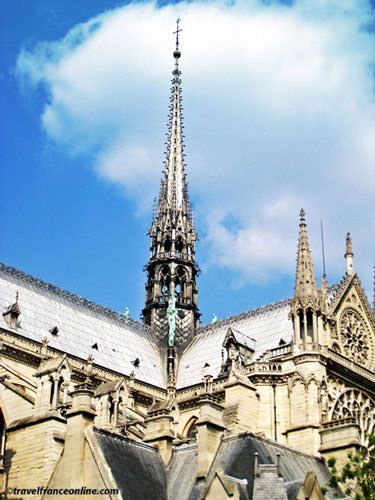 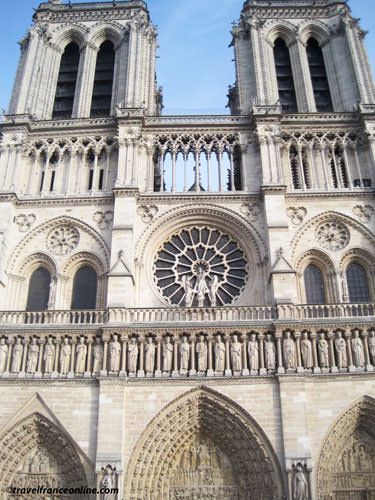 The Neo-Gothic sacristy (rebuilt by Viollet-le-Duc) is laid out around a small cloister decorated with 18 stained-glass windows by the glass-maker Gérente that depict the legend of Ste-Geneviève.

The main bay’s medallion represents the Coronation of the Virgin.

Half of these windows can be seen during the visit of the cathedral Treasure.

The 15th century Great Organ was restored and enlarged to its current size in the 18th century. The organ builder Aristide Caviallé-Coll restored it in 1868.

The electronic transmission was improved in 2012 in preparation for the Chemin du Jubilé celebrations.

It was entirely disassembled in 2014 to replace various mechanisms and restore the facade pipes.

Those who enjoy Sacred Music can attend free concerts every Sunday in the cathedral during opening hours. 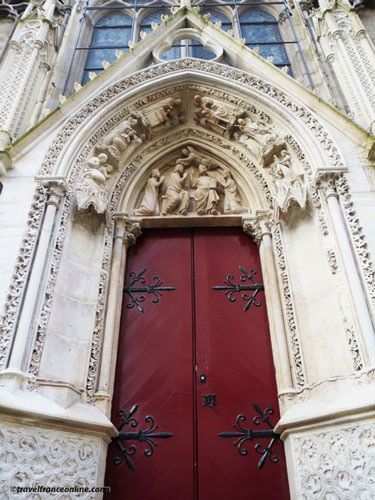 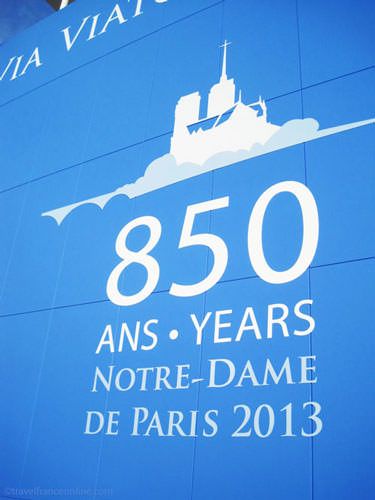 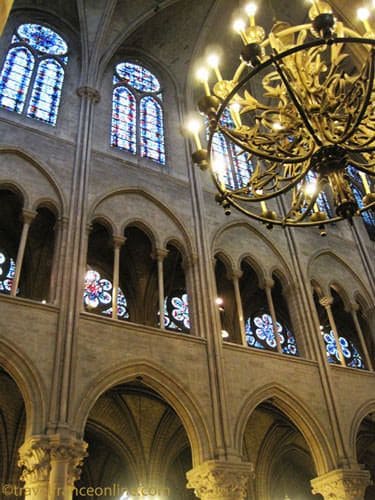 The Porte Rouge (named after its colour) opens the chancel's northern wall and once led to the cloister. Built it in 1250s, it is adorned with a sculpted garland of hawthorn, the sculptural signature of Pierre de Montreuil.

Its single arch is sculpted with scenes from the life of St-Marcel.

The tympanum is carved with a scene representing the Coronation of the Virgin Mary.

Two sculptures representing King St. Louis and his wife Marguerite of Provence, who commissioned its creation, once were at the base of the door.

The lower low relief has a very distinctive Eastern style, which was probably introduced by the Crusaders when they returned from the Holy Land.

Jean de Chelles built the magnificent Cloisters Portal in the 1240s and topped it with the superb north rose window. This door is a few steps away from the Porte Rouge and connected Notre Dame Cathedral to the Canons' lodgings.

The Chemin du Jubilé consecrated the year 2013 that marked 850 years of history, art and spirituality of Notre Dame Cathedral.

It was placed under the patronage of the President of the Republic, the Cardinal Archbishop of Paris, ministry of culture and communication and the Mayor of Paris Jacques Chirac.

Major redevelopment and restoration works were carried out in 2012, prior to the celebrations.

The 850th anniversary’s celebrations focused on the concept of pilgrimage, therefore all through the year visitors were offered a free mini pilgrimage.

Le Chemin des 850 ans started under a 13m high portal and took people to the magnificent facade with its three sculpted gateways, then inside the cathedral to admire the many outstanding work of art.