Gergovie, the name of a battle that changed for ever the destiny of Gaul!

This battle took place in 52BC in the modern day village of La Roche-Blanche, a few kilometers south of Clermont-Ferrand.

In the 1st century AD, Gaul was already a large country inhabited by various people sharing the same origins.

While speaking different dialects, they understood each others and had developed a spirit of brotherhood and mutual aid.

Gallic people were gathered in large federations such as the Arverni or Aedui.

This organization is still the base for the administrative and territorial standard of modern France.

The 1st century AD is also the period when the Romans extended their Western Empire.

Indeed, from 58BC to 50BC Julius Caesar engaged in the conquest of Gaul or Gallic Wars. 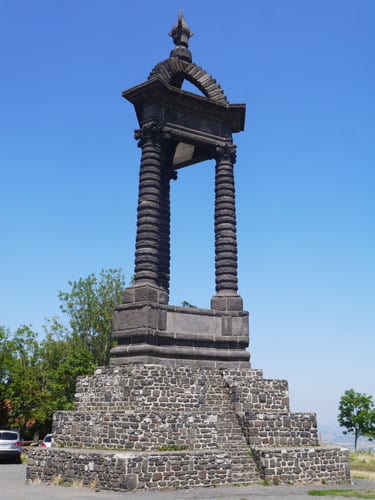 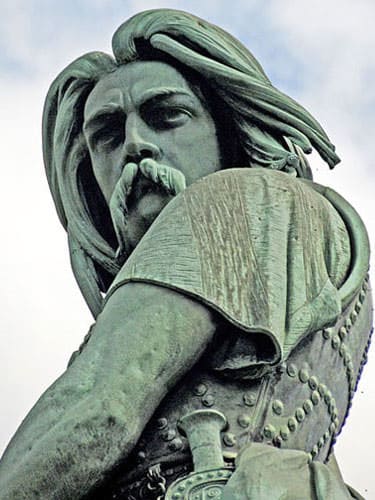 Statue of Vercingetorix in Alesia 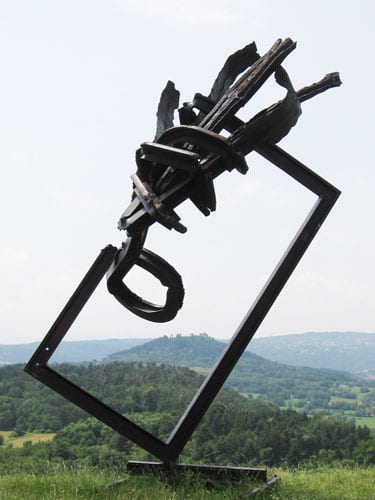 Vercingetorix, the leader of the Gallic rebellion

Celtillos was then the chief of the Arverni, a powerful and prestigious group of Gallic tribes from central France, the current Auvergne.

His son Vercingetorix (circa 82BC-46BC) was proclaimed king in 52BC.

He succeeded in gathering all Gallic tribes into a single federation and took the head of the rebellion against Julius Caesar and his troops.

The early days of the rebellion were crowned with success.

The Gauls indeed inflicted enormous losses to the Roman legions during the Battle of Gergovie forcing them to withdraw.

However, internal political struggles within the Gallic tribes, the opportunism of some and the desire of independence of others continually changed the balance of power between Gauls and Romans.

Differences of opinion on the legitimacy of Vercingetorix had also the ineluctable effect of weakening the rebellion.

The Aedui, a tribe of central Gaul, had for example already made an alliance with Rome long before the Gallic Wars.

Therefore, discordance grew deeper after the tragic defeat at Avaricum where thousands of Gauls were slaughtered.

Some Gallic tribes then chose to ally with the Romans in order to escape annihilation rather than join Vercingetorix and suffer the ravages of war.

The Gauls led by Vercingetorix gradually lost their battles against the invaders.

They eventually entrenched themselves in their oppidum of Alesia, their last bastion of resistance.

Besieged for months and running out of food and water, they found themselves condemned to an ineluctable defeat.

Vercingetorix surrendered then to Jules Caesar in order to save his people.

He was imprisoned in Rome and executed six years later at the Triumph of Julius Caesar.

Vercingetorix has since embodied the spirit of unity, strength, pugnacity and pride of the Gallic nation. 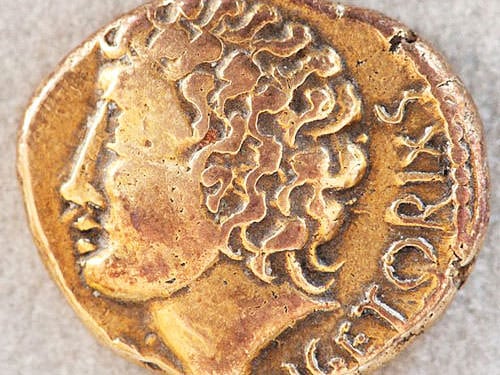 Battle of Gergovie - Gauls versus Romans

Many Gallic warriors indeed died at the tragic Battle of Avaricum.

New Gallic tribes, however, rallied the rebellion led by Vercingetorix and entrenched in Gergovie, a major Gallic oppidum.

The site is now known as Plateau de Gergovie .

It is located in the village of La Roche-Blanche, a few kilometers south of Clermont-Ferrand.

The 30,000 men of the six legions led by Julius Caesar began the siege of Gergovia in the autumn of the year 52BC.

The number of Gallic warriors is unknown, however, they most likely outnumbered the Romans. 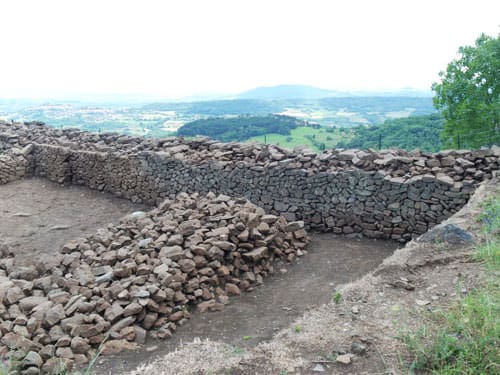 Foundations of the rampart of Gergovie

The Gauls were positioned on the terraces situated below the oppidum and on the surrounding hills of La Roche Blanche and Plateau d’Orcet to the east.

The Romans built a main camp on the Plateau d’Orcet and a small annex camp on La Roche Blanche after seizing it.

They then connected both camps with a wide moat.

The Gauls, aware of the vulnerability of the western part of their oppidum, rushed to consolidate it.

They succeeded in breaking the Gallic lines of defense and reached the walls of Gergovie.

The Aedui horsemen, allied to the Romans, were positioned on the northern side.

Vercingetorix' warriors, with their horsemen in the lead, rushed back to the eastern sector and drove the Romans back.

The arrival of the Aedui horsemen added to the confusion, as the Romans legionaries confused them for enemies.

Vercingetorix called back his warriors on high positions when he realized that Caesar was sending reinforcement troops.

However, Caesar was aware of the heavy losses suffered by his legions (700 men including 46 centurions) and of their vulnerable position because of the topography.

He therefore ordered the withdrawal of his troops.

The Gauls won the Battle of Gergovie and many Aedui warriors rallied Vercingetorix!

Interestingly, the topography of the Plateau of Gergovie played greatly to the disadvantage of the Romans.

It indeed prevented orders from being transmitted, thus isolating the legions from each others. 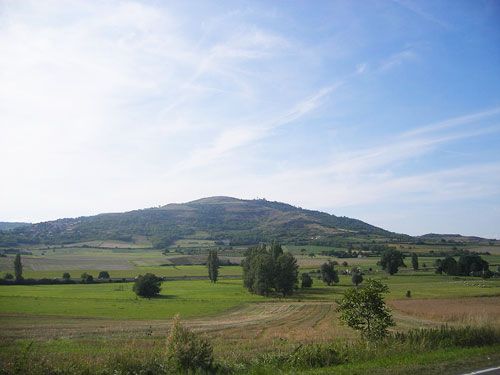 Historians have confirmed the exact localization of the site of the Battle of Gergovie, however, it is still a source of polemics!

The archaeological excavations conducted in the late 19th and 20th centuries show that the oppidum of Gergovie unfolded over about 70 hectares.

It was indeed densely populated.

These excavations uncovered the Roman fortifications built at the foot of the oppidum and section of the rampart.

This led experts to confirm that the Roman annex camp was at La Roche Blanche and the main camp on the Plateau d'Orcet.

However, too few remains have been uncovered to this day and additional excavations would be welcome!

Jean Teilhard used volcanic stone of Volvic in order to create the memorial that marks the site of the Battle of Gergovie.

This monument, dedicated to the memory of Vercingetorix, was unveiled in 1903.

In 1942 earth from all regions of France was collected and placed in the base of the memorial.

Finally, a sculpture by Yves Guérin was placed in 2007 on the site.