Notre-Dame-du-Port Basilica is located in the Quartier du Port in Clermont-Ferrand.

It is one of 10 'Major' Romanesque churches of Basse-Auvergne, all located within 30kms of the city.

It is therefore believed that these churches had originally the same architectural and ornamental features.

The Auvergne Romanesque architecture and art developed in the 11th and 12th centuries.

They are both characterized by their rich ornamentation and consistency of style.

Notre-Dame-du-Port Basilica was initially known as Sainte-Marie Principale (Major) in order to distinguish it from the neighbouring Cathédrale Sainte-Marie.

However, it was eventually renamed after the Quartier du Port.

The port or Portus was indeed the area where the goods, which arrived in town, were offloaded and stored.

In 1998 UNESCO registered it as World Heritage Site on the list of the Ways of St Jacques de Compostela in France. 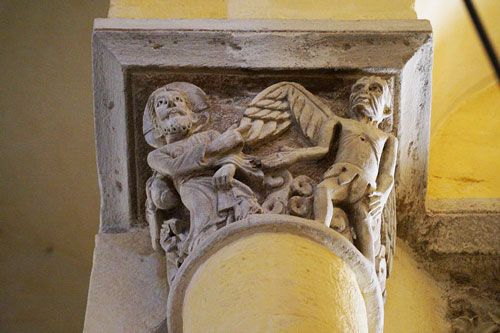 Capital carved with the devil 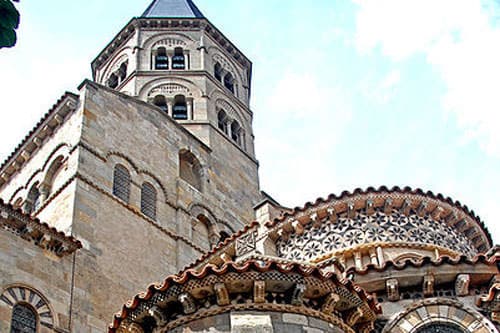 Auvergne Romanesque architecture at its best! 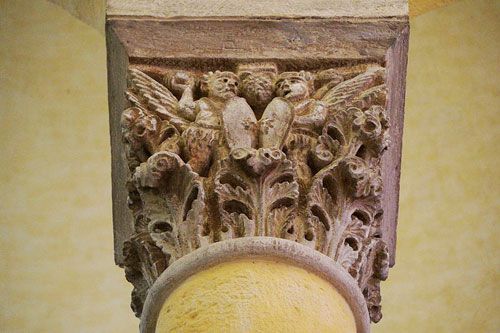 Saint-Avitus, the 18th bishop of Clermont, founded the church in the 6th century AD.

The Normans sacked it during their incursions of the 9th century.

However, the church was not rebuilt until the 11th-12th centuries.

However, the earthquakes that took place in the 15th century severely damaged it.

Notre-Dame-du-Port Basilica is indeed in the land of the ancient volcanoes of Auvergne.

A community of canons, regular until the 13th century and secular thereafter, served it until the French Revolution.

The current bell-tower was part of the alteration work conducted during the 19th century.

This alterations, however, concealed too many original architectural features.

An extensive restoration project therefore took place in 2007-2008 in order to restore the church to its early 1900's appearance.

The statue of Notre-Dame-du-Port was transferred to the cathedral for duration of the work, but was returned to the basilica on Sunday, December 7, 2008.

A masterpiece of Auvergne Romanesque architecture

It was built to a Latin cross basilica type plan.

It strikes by the diversity of its rich interior decoration and four radiating chapels opening onto the ambulatory.

The carved capitals are considered among the most beautiful in the Auvergne region!

They indeed represent scenes from the Bible, among which Adam and Eve expelled from Paradise.

The angel is represented holding Adam by his beard.

But Adam felt that he was not the only culprit, and is therefore represented pulling Eve's hair!

The second major theme of the sculptures is the struggle between vices (greed) and virtues (generosity and charity).

The tympanum is equally remarkable.

It represents Christ in Majesty, the four evangelists and two angels hiding behind their multiple pairs of wings.

Notre-Dame-du-Port Basilica is placed under the protection of Our Lady of the Port.

The small Black Virgin statue is sheltered in La Souterraine, the crypt situated beneath the chancel.