Fairy Chimney or Cheminée des Fées is an intriguing creation of Nature that always amazes.

It has therefore given rise to many legends over the centuries.

The fairy chimney of Cotteuges is no exception to the rule!

Cotteuges is a little village located about 40kms south of Clermont-Ferrand.

Its fairy chimney is one of many natural attractions the Auvergne region has to offer.

The two sites can therefore be visited within the same half day. 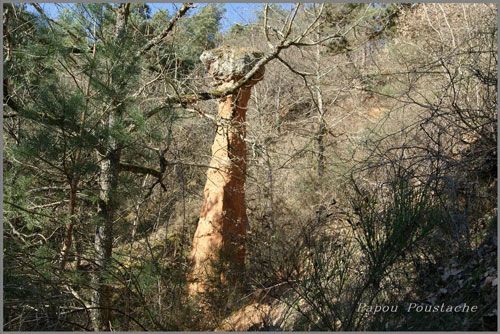 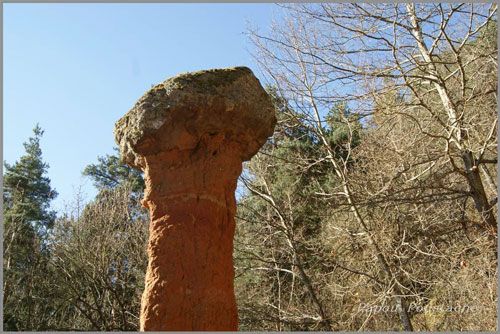 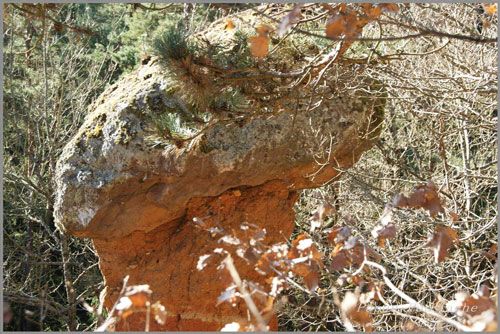 Obvious difference of texture between basalt and clay

So what is a fairy chimney?

An impressive column of clay

A fairy chimney is a column of friable rock, often sedimentary, capped by a hard rock, such as sandstone, which resisted the effects of millennia of natural erosion.

Some fairy chimneys were therefore formed by water erosion and chemical reactions between rock and water.

Others were formed by the action of wind and drastic changes in temperature, such as alternating freezing and thawing, which triggered a dilation of the rock and its bursting.

The weight of the hard rock increased the resistance of the column by compressing the sedimentary particles of the soft rock.

Natural calcification can also occur and therefore enhance this resistance.

The fairy chimney of Cotteuges was formed when the volcanoes of Auvergne were active.

A block of lava (basalt) was projected into the air during an eruption and landed on the clay soil.

Over time erosion dissolved the clay, with the exception of the section protected by the huge block of basalt, which is now perched atop a towering column of clay!

Some fairy chimneys are therefore several meters high and look like giants.

The Fairy Chimney of Cotteuges is very and and well hidden in the heart of a forest of beech.

Locals also call it 'La Demoiselle coiffée' (that translates roughly as the young lady with the hat).

Follow the D621 road from Besse to the village of Cotteuges, where signs will point you towards the correct direction.

Once in the village, turn right towards the small bridge spanning La Couze Pavin, then leave your car in the parking lot on the right.

Continue on foot, and follow the country track for about 800m.

The fairy chimney of Cotteuges is nestled among the trees, along the track.

Credits: Photos and source text by Jean Piludu - Article translated and adapted for and by travelfranceonline.com - Photo via Wikimedia Commons: header