Denim, invented in Italy and initially made in France

Denim is today any modern wardrobe 'basic item' and could be considered as a Franco-Italian creation!

The weavers of Genoa invented it in the early 16th century.

It was then a robust linen and cotton cloth that served for the manufacture of sailboats and sailors’ outfits.

However, Teramo Piaggio was the first to dye it blue in 1538!

Indeed, not only did he use the cloth as a canvas, but he also dyed it with indigo, to paint his Passion of Christ.

This painting is today exhibited in the diocesan museum of Genoa.

Back to the 16th century.

Genoa was a thriving city and port that exported to the Mediterranean and European countries.

All goods offloaded from the boats were then marked with their place of origin.

The bales of ‘cloth from Genoa’ that were offloaded in the port of London were thus marked as ‘cloth from Jeane’, a spelling adapted to the English pronunciation.

Yes, you guessed, the name evolved in jean!

The English became so taken by this robust and cheap cloth, that from the 17th century onward they imported it in huge quantities in order to make farmers’ overalls.

What is the difference between jean and denim?

However, there was originally a technical difference between jean and denim fabrics.

The workers overalls that the English manufactured were robust and thick, even rough, in order to last long.

But jean fabric was so cheap that they soon used it to produce everyday clothes.

As a result, weavers gradually replaced linen with cotton to soften the cloth and make it more comfortable to wear.

This improved cloth was an immediate success, as it was less gritty and grainy than the original mixed linen-cotton jean fabric! 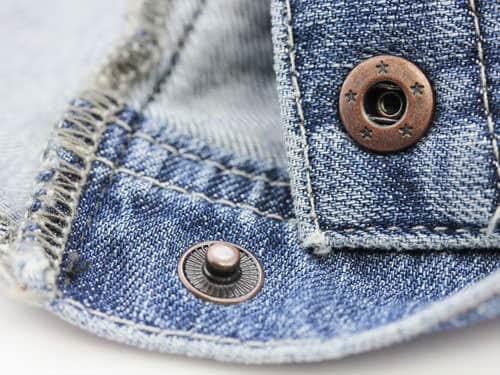 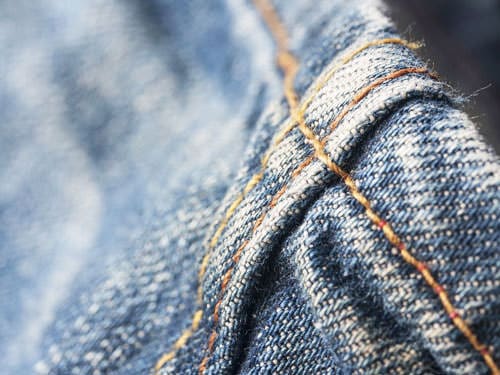 Why did they call this new fabric denim?

This fabric was originally made from a mix of wool and silk, two materials then produced locally.

Sheep that graze in the Cévennes mountains indeed provided good and affordable wool, while the development of sericulture spread the use of silk to most social classes.

In the early 18th century Nîmes merchants recognized the huge commercial potential of the cloth and started exporting it to England, thus supplanting Genoa.

They turned Nîmes into the undisputed producer and exporter of ‘toile de Nîmes’.

The denim trade also boosted even further the silk industry and by extension the hosiery and clothes industry.

As a result, Nîmes was the 3rd most important French industrial city after Paris and Lyon during the 18th century!

However, manufacturers kept improving the denim over the decades in order to adapt to the evolution of the market.

The turning point in the denim production took place in the early 19th century.

This company thrived as an uncontested leader in denim manufacturing until the early 20th century, when it was eventually supplanted by ambitious competitors.

One of them, Cone Mills started supplying Levi Strauss in 1915 and became its exclusive supplier 7 years later.

This was the beginning of one of the greatest commercial adventures of modern times!

So next time you put on your jeans, have a thought for the ancient weavers of Genoa and Nîmes; without them, your denim won’t exist!