Cap Frehel Peninsula is situated along the beautiful Côte d'Emeraude.

The peninsula boasts wonderful views of the surrounding coastal towns and villages, but also of the Isle of Bréhat, St-Brieuc and the fortress of St-Malo and you can even see Jersey in clear weather.

Seagulls and cormorants glide gracefully above the 70m high cliff that just into the emerald sea where sky, sea and earth come together.

However, be very careful when walking along as the cliff edge is not secure and not protected. 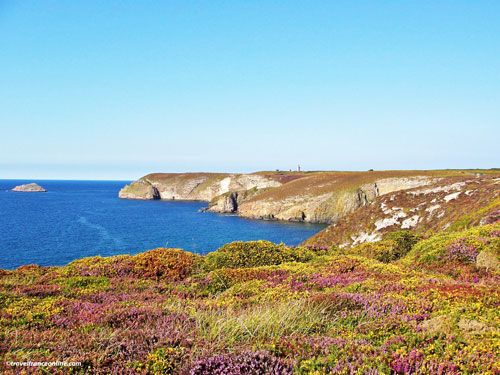 Cap Frehel is a bird sanctuary.

The paths that lead to the tip of the peninsula and the two lighthouses is part of the GR34 hiking trail.

However, stay on the wooden platform enclosed by ropes in order to protect the surrounding eco-system.

It runs across heather, yellow gorse and white flowers moorlands that change colours with the seasons.

Visitors can therefore enjoy the untamed beauty of the peninsula and study the birds while respecting their territory.

Don't forget your binoculars as the Cap Frehel attracts about 700 native and migratory birds that nest in the cliff and the surrounding islets.

The only buildings on the Cap Frehel are the lighthouses and the panoramic restaurant built on the Rocher de la Fauconnière. 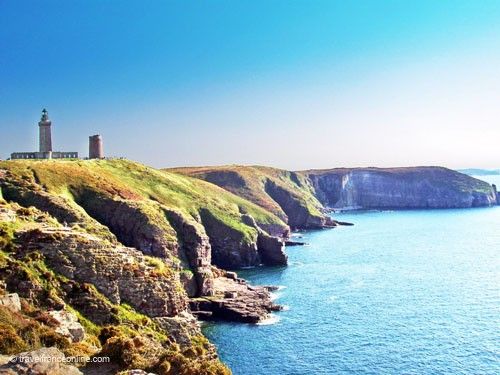 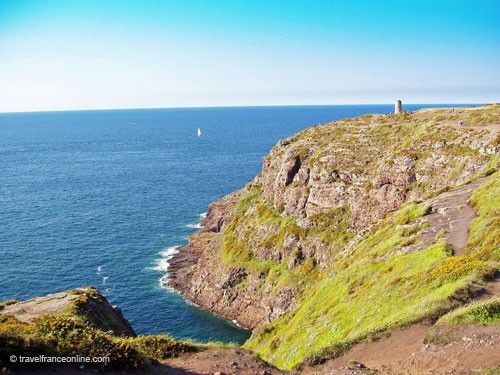 Three lighthouses were indeed successively built through the centuries on the Cap Frehel.

In 1694, Marshal Vauban commissioned the construction of a series of coastal forts and watchtowers in order to protect the French shores from English incursions.

In 1702, his assistant Jean-Simeon Garangeau - the Chief Engineer and Director of the Fortifications of St-Malo - supervised the construction of the 15m high round tower.

However, this first watchtower was only in use during the winter months and was powered by coal burnt in the open on the roof terrace.

It was lit throughout the year only in 1717.

Lamps equipped with sixty spherical reflectors powered by vegetable oil and gathered in a lantern eventually replaced this basic brazier in 1774.

New lamps equipped with eight parabolic reflectors, which transmitted every 135 seconds, eventually replaced them in 1821.

They could be seen at a distance of 21 nautical miles. 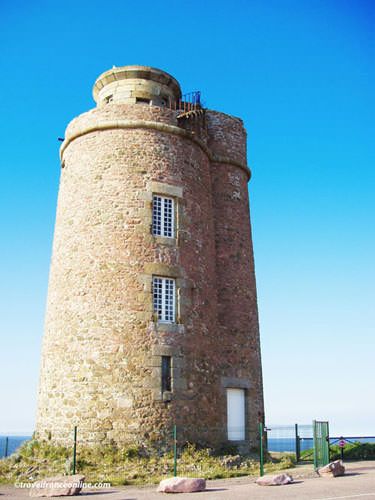 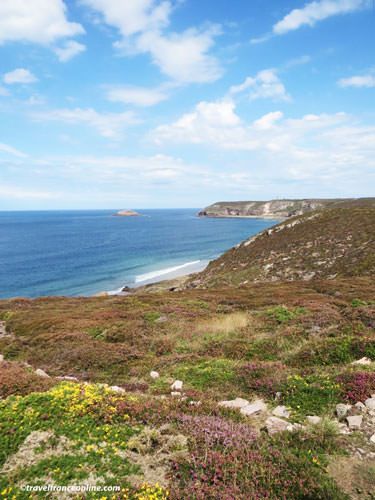 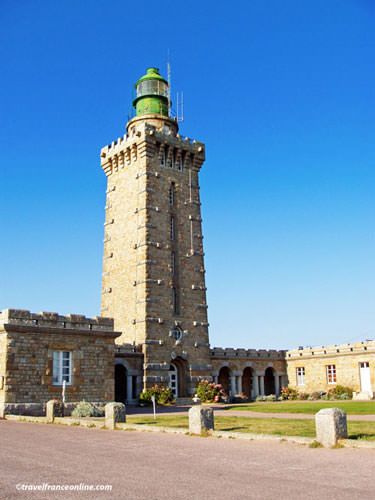 The architect Léonce Reynaud built a second lighthouse in the 1840s.

He equipped his 22m high octagonal tower with a Fresnel lens with sixteen half lenses which emitted a signal every 30 seconds.

This signal was visible 25 miles away from the coast.

The lighthouse was converted in 1875 and powered with mineral oil, but its electrification never took place.

It was powered with petrol and transmitted every 10 seconds.

The Germans used the lighthouse as a watchtower during WWII, however, they dynamited it before retreating on August 11, 1944.

The old Tour Vauban was therefore re-used until the inauguration of the third and current lighthouse which was built between 1946 and 1950.

The 32m high square stone lighthouse stands in the centre of a U-shape building.

It is indeed visible at a distance of 200m in fog and in a 100km radius in clear weather!