A maze of narrow and busy lanes lined with houses, shops, churches, an orphanage and even a hospital, once encompassed it.

Haussmann demolished them in the 1860's to enlarge the church square by six-fold.

All that is left of their presence are the light colour paving stones that delineate their former layout.

The Hôtel-Dieu dated back to 660AD and was the oldest hospital in Paris.

It was located by the river, where the equestrian statue of Emperor Charlemagne today stands.

Hausmmann rebuilt it in Rue d'Arcole, on the northern side of the square.

The splendid portal of the Eglise Saint-Pierre-aux-Boeufs was rescovered; it now serves as main door to Saint-Sévérin Church in the Latin Quarter.

The medieval district has long gone and has left place to a spacious square that beautifully showcases the cathedral.

The Parvis Notre-Dame is also where you'll find the Bronze Star, embedded in the ground outside the entrance to Notre-Dame. 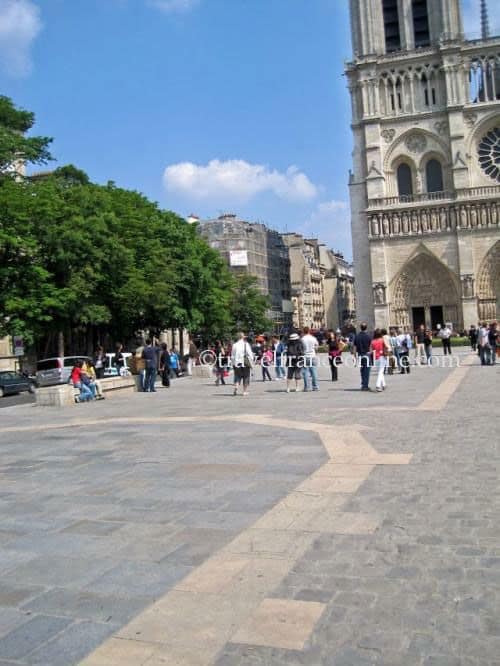 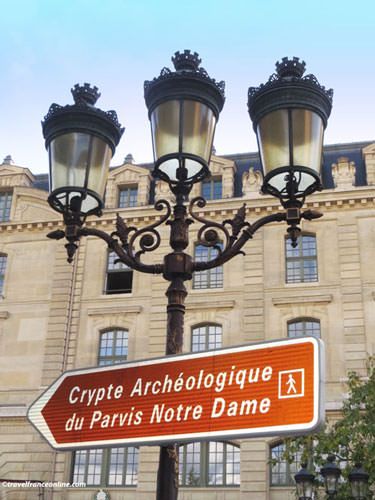 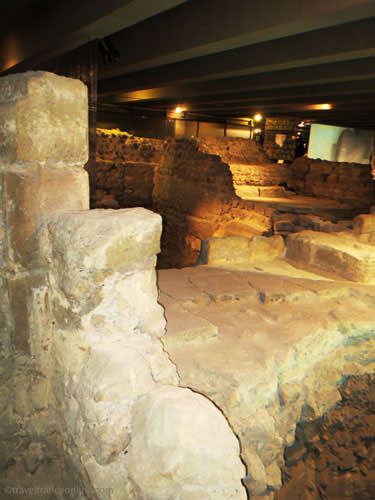 The creation of the Archaeological Crypt Notre Dame was not really planned!

It all started in the 1960s when the construction of an underground car park unearthed a wealth of Roman and medieval architectural vestiges.

Since it was impossible to move them, the best solution was to build a crypt in order to exhibit them.

The crypt is therefore an on site museum, a time-travel machine!

Your journey indeed begins 20 centuries ago, during the Gallo-Roman era, when the level of the Ile de la Cité was 7m below its current level.

You'll discover large sections of the rampart the Parisians built in haste during the barbarian invasions of 285AD.

They re-used the stones of the monuments of the Rive Gauche (mostly Latin Quarter) to erect it; many of these boulders are carved, engraved or sculpted.

The most famous is the Pilier des Nautes (Watermen’s pillar).

It was discovered under the cathedral’s chancel and is now exhibited in the Cluny Museum.

Excavations uncovered also the remains of three Gallo-Roman buildings heated by hypocaust, and the foundations of the Church of Saint-Etienne, built in the 6th century by King Childebert.

The visit transports you then to the Middle-Ages.

A path follows the layout of the medieval lanes and the foundations of the various buildings that lined them.

These were demolished in 1745 (then rebuilt!) for the widening of the Rue Neuve, the square’s main street, and for the construction of the Hospice des Enfants-Trouvés orphanage.

The visit takes about an hour*.

It's obviously for archaeology enthusiasts and those who want to discover Paris off the beaten track.

It is also a great site to visit on a rainy day - unbelievable, but it sometimes rains in Paris! 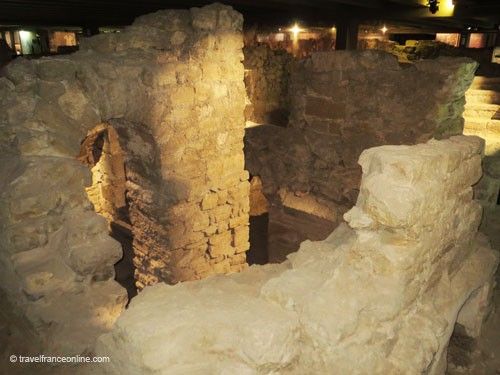 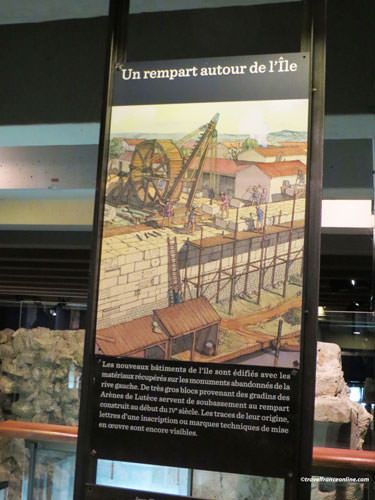 Artist impression of the construction of the Gallo-Roman rampart 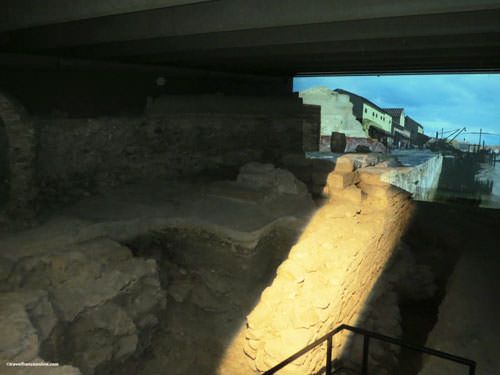 Large section of the Gallo-Roman rampart and artist impression 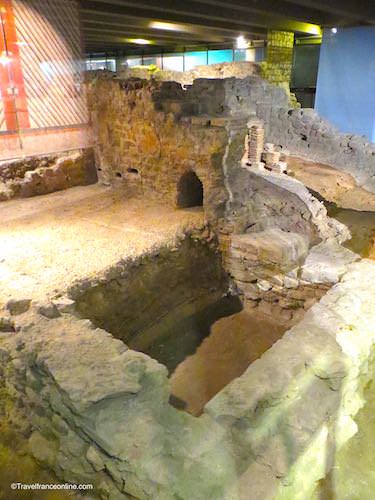 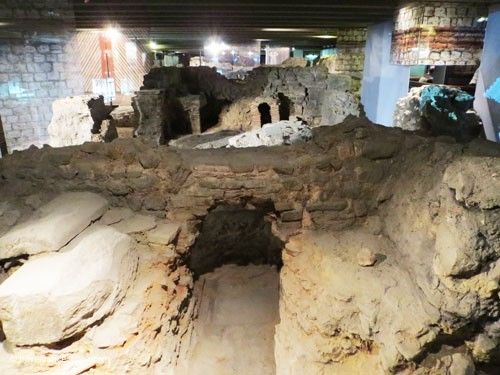 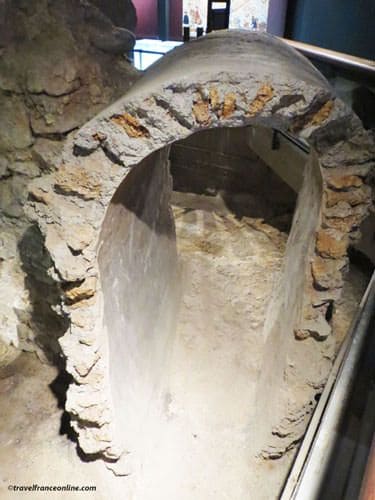 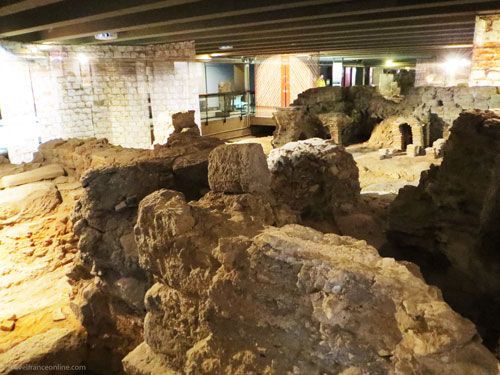 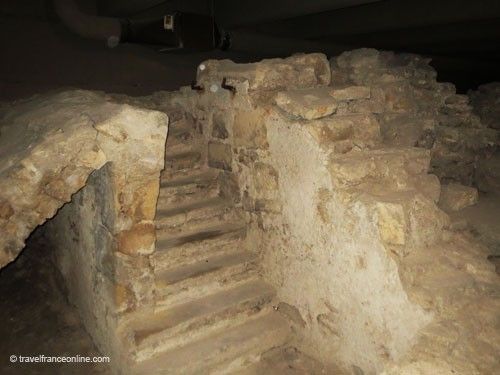 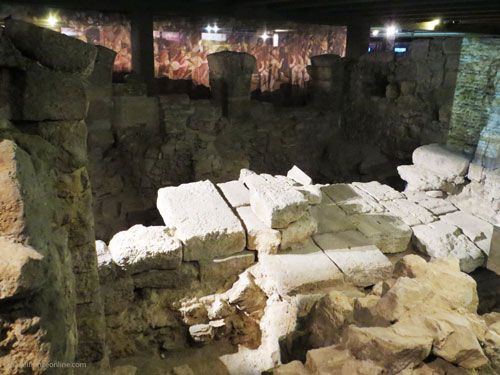 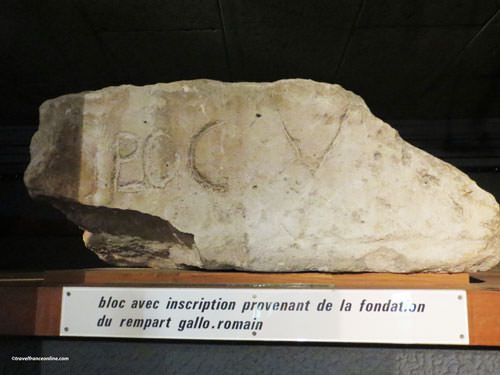 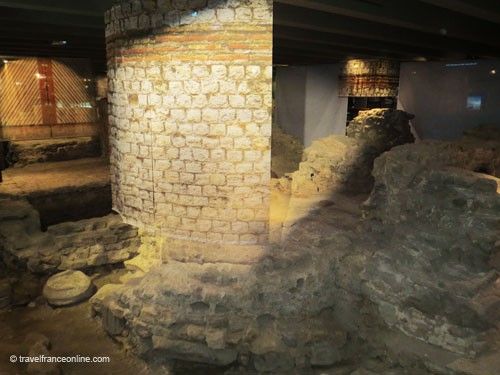 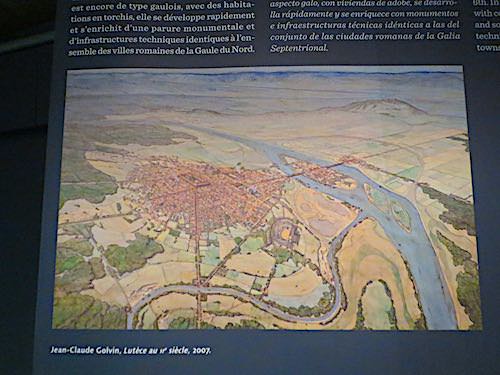 Lutetia in the 2nd century AD