The number of regions in Metropolitan France went down from 22 to 13 ( this includes Corsica island).

This seems simple at first.

However, many people might be confused when they hear French talk of Poitou, Bourbonnais, Auvergne, Béarn, Perigord or Aquitaine.

Some, such as Bourbonnais, Béarn or Périgord, were historic provinces that became departments during the French Revolution.

Others, such as Auvergne and Aquitaine, were counties or duchies.

Difficult to get a clear picture as most French randomly refer to them, knowing instinctively which is which.

So, what you need to know is that, until the end of the 18th century, France was organised into provinces. 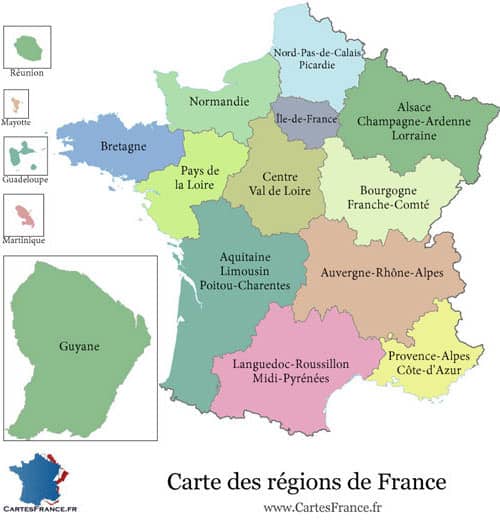 A first territorial organization occurred at the French Revolution

1- The historic provinces were replaced by departments by a Decree of December 22, 1789.

3- Their list and geographical boundaries were defined on February 26, 1790.

4- Their names were selected based on their geography and hydrography.

5- However, the Duchy of Savoy, the County of Nice and the Comtat Venaissin were not part of this initial territorial organization.

It forms today the departments of Savoie and Haute-Savoie.

7- The County of Nice, which also belonged to the House of Savoy, was annexed to France in 1860 in order to form the department of Alpes-Maritimes.

8- Finally, the Comtat Venaissin was initially part of the County of Toulouse.

The Comtat Venaissin remained a papal enclave until under the Revolution (1791) and today forms the department of Vaucluse.

9- Some departments have changed names since their creation.

For example the Côtes du Nord are now known as Côtes d'Armor.

As I've explained above, Metropolitan France and Overseas Territories are now divided in 18 regions (13 in France Metropolitan and 5 overseas).

Each region is administered by a Conseil de Région - Regional Council, whose members are elected by direct universal suffrage for 6 years.

Each region is divided into administrative sub-divisions or départements.

There are and 101 departments.

Metropolitan France has 96 departments, numbered from 1 to 95 except Corse-du-Sud (2A) and Haute-Corse (2B).

The départements are administered by a Préfet (Préfecture).

The préfecture is the capital of the department.

Each département is sub-divided into arrondissements or districts.

Each arrondissement is sub-divided into cantons.

It is the electoral constituency of the councilors and members of the Conseil Général de Département - General Department Board.

Each canton is sub-divided into communes or communities that are administrated by a maire – mayor (mairie – town hall).

The commune is a public and political community, administered by the City Council.

It is placed under the leadership of the mayor.

The departments are therefore divided in 343 arrondissements, 4,058 cantons and 36,699 communes.