Saint-Leonard-de-Noblat, a village named after a holy man

Saint-Leonard-de-Noblat is located about 20km east of Limoges.

The village initially developed along the Roman road that linked Avaricum-Bourges to Burdigala-Bordeaux and by the ford across the river Vienne.

The holy man lived during the 6th century.

According to legend, Leonard was born in a noble Frankish family and was sent at the court of King Clovis.

He became the patron saint of prisoners, because he had been granted the privilege of visiting prisoners and liberate them.

However, Leonard refused any reward or privileges due to his rank.

The legend of saint-Leonard

He took orders and became hermit in the Forêt de Pauvain, on a hill overlooking the river Vienne.

It was at that time that Leonard became also the patron of pregnant women.

Once more, legend has it that the hermit invoked God's protection for the Queen of Aquitaine during a very difficult birth.

Not only did the mother succeed in giving birth to a healthy son, but also both child and mother recovered well.

In gratitude the King bequeathed the land of Noblac and Forêt de Paulain to Leonard.

Leonard then built the Chapelle Notre-Same Sous les Arbres, which he dedicated to the Virgin Mary and the Bishop Saint-Remi of Reims.

Many prisoners, set free because of his negotiation skills, came to seek asylum in the chapel.

Leonard died in 559AD and was buried in the chapel.

His tomb became soon a major pilgrimage site renowned in the whole Christendom. 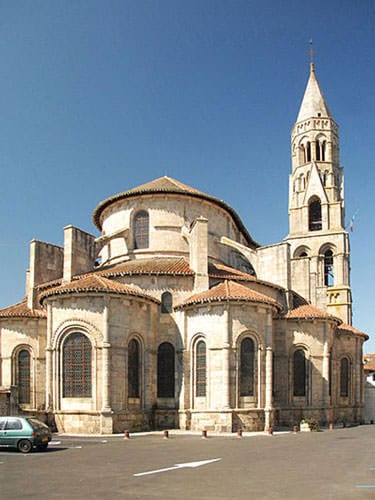 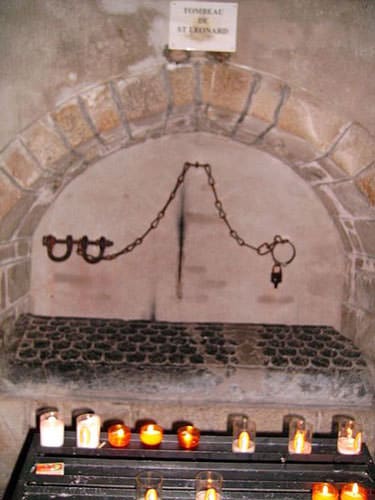 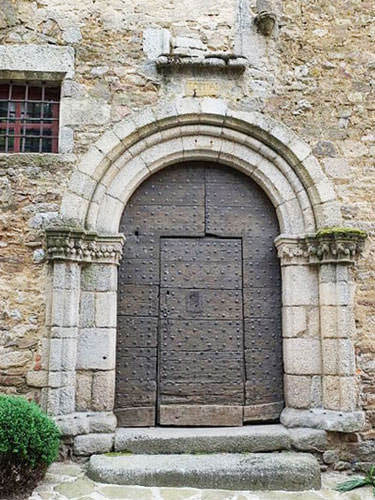 An abbey was built on the site of his tomb in the early 11th century.

A village naturally developed around it.

Worshipers from all origins came over the centuries to the abbey of Saint-Leonard-de-Noblat in order to invoke the holy man.

This included barren women and families of prisoners of course.

However, it also included kings and queens such as Richard the Lionheart, Charles VII and Anne of Austria to name a few.

The pilgrimage remained very popular through the centuries because of Saint-Leonard.

The other reason is that the abbey stood along the Voie Lemovicensis, the pilgrimage road to Santiago de Compostela.

The Collegiate Church of Saint-Leonard is today a classified Historical Monument.

UNESCO ranked it as a World Heritage Site of the Routes of Santiago de Compostela in 1998.

It is indeed a superb illustration of Romanesque architecture.

The 'Limousin’ style bell tower is open on two sides.

The church contains the tomb of Saint-Leonard, which is protected by a prisoner’s chain.

The tradition is that barren women and those wishing to conceive must touch the lock.

The town of Saint-Leonard-de-Noblat has many religious and medieval buildings of great interest.

One of the town's landmarks is the Gay-Lussac Museum, which was founded in a former convent.

It is dedicated to the chemist who was born in Saint-Leonard-de-Noblat.

The Moulin de Got is another site of particular interest.

This mill was built in 1522 at the confluence of the Vienne and the Tard.

It manufactured rag paper from hemp, linen and cotton until WWII.

It was restored after years of neglect and reopened in 2003.

Saint-Leonard-de-Noblat is also a trusted name for its Limoges porcelain factories.

It is also the place where the renowned Limousin cattle breed was created.

Finally cycling enthusiasts will recognize the name of Raymond Poulidor, one of the acclaimed French cyclists who retired in Saint-Leonard-de-Noblat.