Paris before the sewers

Paris Sewers Museum is not a visit that comes to mind when you come to Paris for the first time!

Yet this visit off the beaten path is one of the most original!

It indeed allows you to discover a different Paris, the underground Paris!

This tour takes you through six centuries of the history of water in Paris.

The history of drinking water and water not suitable for drinking; waste-water and the evolution of sanitation and finally evacuation and water purification techniques.

For most of the Middle Ages the Parisians indeed took water directly from the Seine... and threw their waste-water in the city’s lanes.

This sewage ran towards wasteland located in the outskirts of the city.

From there it went back into the Seine as it followed the gentle slope of the terrain.

The loop was closed!

It was not until the early 13th century that the first attempt at a system of sewage appeared.

King Philippe-Auguste commissioned the digging of a central gutter during the paving of the lanes of Paris.

The Provost of Paris (mayor) Hugues Aubriot commissioned the construction of the first vaulted masonry sewer in 1370.

This sewage system was obviously an improvement on that of the previous centuries, however, but was not exactly environment-friendly yet!

It was not before the 18th century that the Provost of the Merchants of Paris Michel-Etienne Turgot commissioned the construction of a large sewer belt on the right bank.

However, the small river Bièvre was also converted into an open sky sewer to serve the left bank!

It was not until the reign of Napoleon I that the first proper sewer system was built.

However, this 30km long sewer was still far from the efficiency of Paris’ modern sewers though. 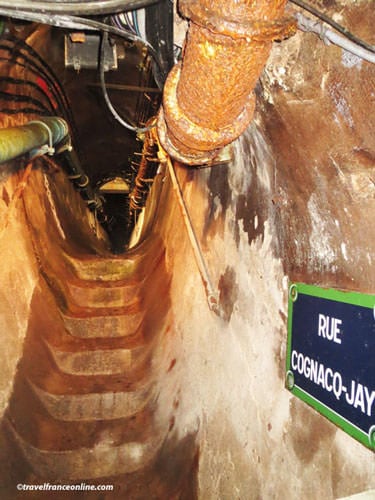 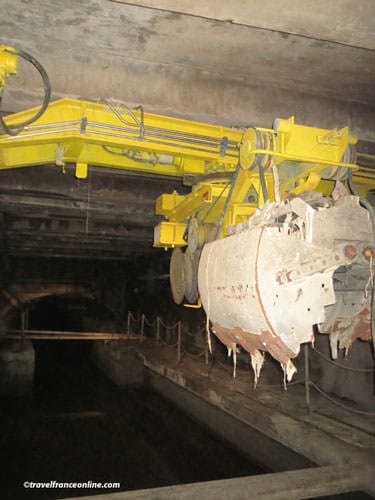 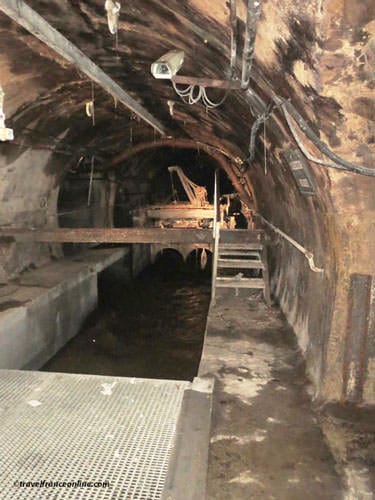 Construction of modern Paris sewers began during Haussmann's urban work in the 1850s.

The prefect of Paris commissioned the engineer Belgrand with the creation of a dual sewage network.

By 1878 there were already 600km of underground galleries!

Sewage was no more discharged into the Seine, but miles downstream in a sewage treatment plant.

This system involved the implementation of leveling stations in order to compensate for the declivity of the land.

It also required pumping stations in order to recover sewage from the districts located below the city’s level and regulate the water levels.

We can say that Belgrand built ‘Underground Paris’!

Paris sewers were since developed and expanded fourfold in order to meet the needs of a population in constant expansion.

Today they comprise 2.400 km of underground galleries, but do not worry only a few selected corridors are open to the public! 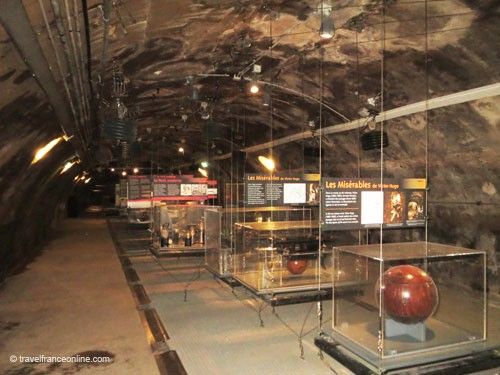 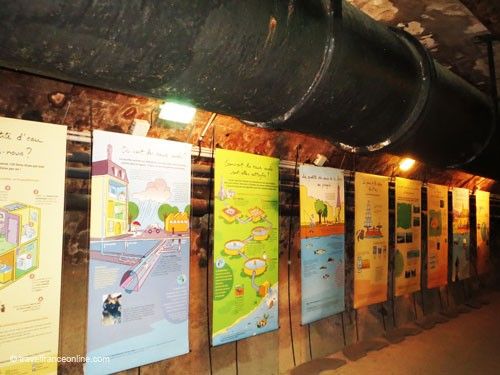 A stroll in Paris Sewers?

You can book guided tours.

However, the leaflet that comes with your entrance ticket and the numerous information panels placed all along the galleries are largely sufficient.

The tour takes you for a stroll over sewage, it also teaches you about the evolution and history of Paris’ entire water network and techniques of sanitation through the centuries.

Now, the word 'sewer' makes you immediately think of vile odors and matters!

To be honest, there is certainly a slight acrid odor floating in the corridors.

However, you get accustomed to it very quickly, because it's what you expect when visiting this sort of site.

After all, you chose to visit Paris sewers, you are not on a bateau-mouche sailing over the Seine on a fragrant Spring afternoon! 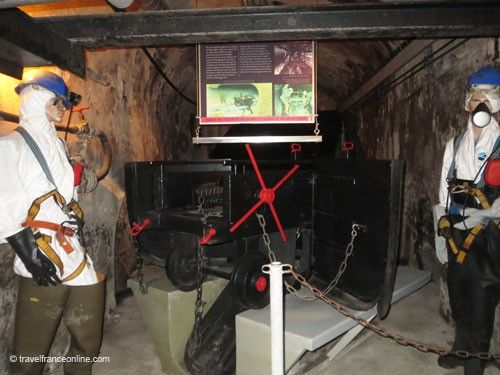 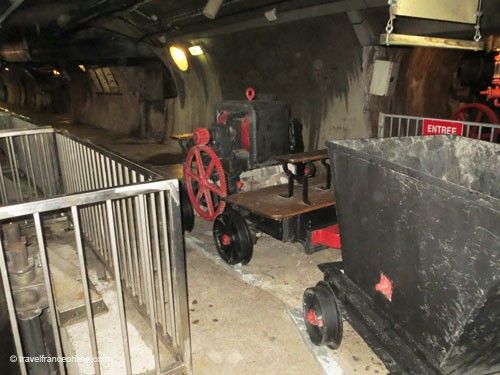 The impressive underground corridors are, contrary to what some of you might think, exceedingly clean.

What impressed me most was walking over footbridges spanning the open sewage pipes where you can see floating objects (but nothing vile, I assure you!)

The corridors are all named after statesmen or engineers, who in their lifetime contributed to the creation or improvement of the Paris Sewers.

You start your visit in the Galerie Hugues Aubriot, the Provost of Paris who commissioned Paris’ first vaulted sewer in the late 14th century.

Once in the Galerie Turgot you discover an impressive system of pipes and a "sewer wagon" used for cleaning the bottom of the collectors.

You also see a 'machine-gun' that is operated manually to scrape the bottom of the pipes in burst and push the sewage forward.

Turgot, who is also known for his mapping of Paris (Plan Turgot) built the first sewer belt in the 18th century.

You then you arrive in the Galerie Bruneseau, where you can see a "sewer boat" cleaning the bottom of large waste collectors.

A dredge situated above the collector ‘catches’ the solid particles (again nothing vile!) 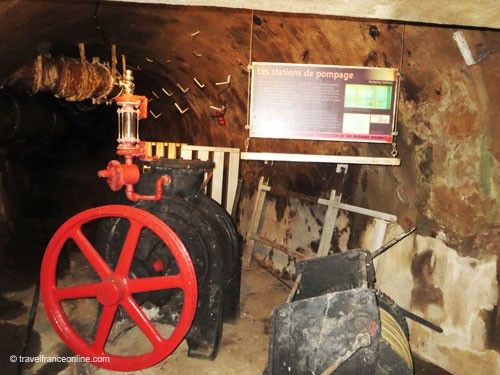 Pump to regulate the water level 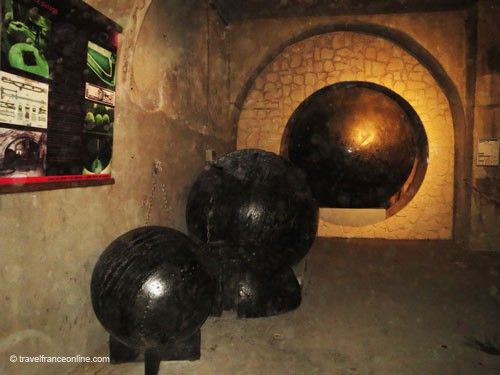 Bruneseau conducted a complete record of Paris vaulted sewers under the First Empire.

As you walk along the Galerie Duleau you see the waste collector of the Avenue Bosquet.

The gallery was named after the engineer who improved the vaulted sewers’ technique in 1823.

The Galerie Belgrand is located above a large treatment collector.

Its width allowed for the setting up of the Paris Sewers Museum.

The museum is about water purification and the techniques employed and the challenges encountered in the preservation of the ecological balance of the city.

Paris Sewers were entirely renovated and improved over a period of 20 years from 1991 onward.

This vast rehabilitation program earned the sanitation department of the City of Paris to be the first municipal service to receive a triple certification for Quality Safety and Environment!

There are also a water level pump, ‘sewer wagons’ to carry waste and a faithful replica of a basic sewer.

The tour takes less than an hour.

It exits via the museum’s souvenir shop, where you can buy books or various items related to Paris Sewer (no waste for sale though!)

I strongly recommend visiting Paris sewers, it's fascinating and really off the beaten track! 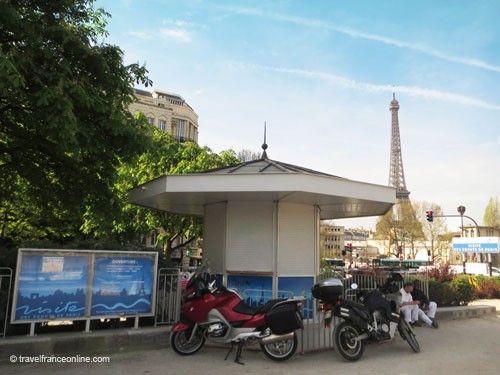 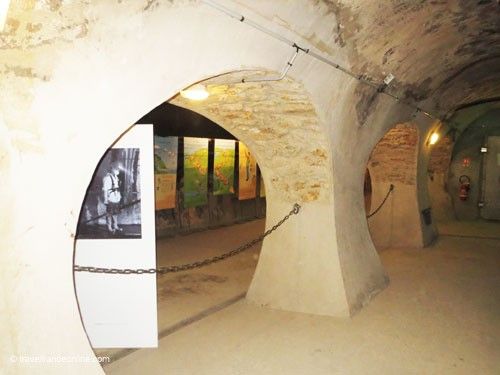 The outside entrance is well signposted but many people still miss it as it is located in a small kiosk.
Wear comfortable shoes and have a cardigan handy as the proximity of water tends to cool the surrounding air.
Children love the tour, in fact it will definitely be the tour they will remember the most!
The galleries are absolutely safe, as all collectors and footbridges are secured with grills.
The only downside might be the slight acrid odour that could incommode some people with breathing issues.

N.B. The Musée des Egouts will re-open early 2020 after several months of renovation