The Orval chariot burial was discovered in Orval, a community located about 6kms southwest of the city of Coutances.

This burial site is that of a Gallic warrior of high rank buried with his two-wheeled chariot and two horses.

It was discovered in 2005, during road works.

Chariot burials appeared during the First Iron Age and were used until the 1st century BC.

This exceptional type of burial was reserved for high-ranked warriors, who were buried with their war or ceremonial chariot and their horses.

The Orval chariot burial is the only tomb, known to date though in Celtic Gaul, to contain horses.

Orval has been occupied since ancient times.

Indeed, foundations of a large Gallic farm located in the vicinity of the chariot burial were uncovered. 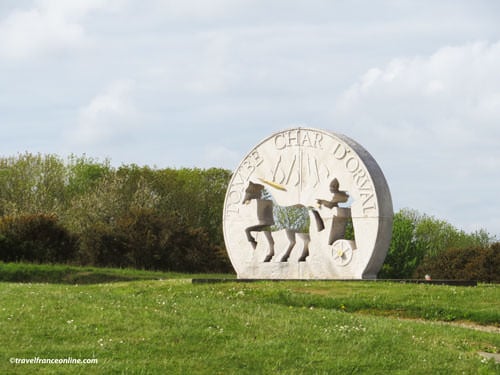 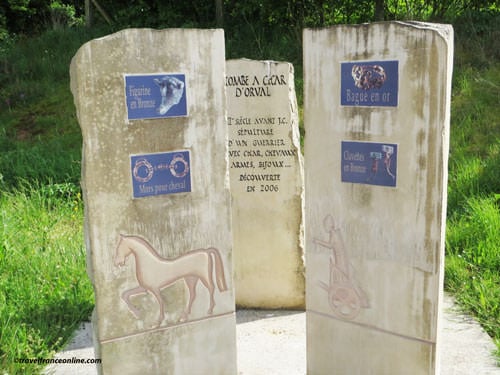 All that remains of the chariot of Orval are a few metal items of the wheels, items which are, however, sufficient to reproduce its shape and size.

The horses’ harnesses were decorated with ivory and coral from the Mediterranean region.

These decorative elements alone testify of the extensive commercial exchanges of the time.

The high-ranked warrior of Orval was also buried with his spear, his sword in its sheath and an ax.

He also wore jewellery such as brooches (fibulae) and a gold ring, a sign of his affiliation to the military elite.

The study of the fibulae dates the burial near the middle of the 3rd century BC.

Many tools including hammers, knives and a sickle were part of the funerary furniture which is exhibited in the Musée de Normandie in Caen.

The Orval chariot burial is a type of burial well documented in Northern France.

It is, however, almost unique in the Normandy region, and is in itself a superb illustration of Celtic art.

A superb commemorative monument today adorns the roundabout on D971, south of Coutances; you'll find the 3 information steles on the small car-park.