Notre-Dame-de-France on the Rocher Corneille

Notre-Dame-de-France statue is one of the many landmarks of the beautiful city of Le Puy-en-Velay in Haute-Loire.

The Virgin is represented blessing the city from the top of a 132m high volcanic spur, the Rocher Corneille.

She wears a crown of stars and carries the Child Jesus on her arm, while holding a globe and crushing a snake under her foot.

Jean Bonnassieux sculpted the statue in 1860.

However, Father Xavier Ravignan and Bishop Pierre Darcimoles decided of its creation a decade earlier.

The two clergymen, indeed, went for a walk on the Rocher Corneille.

The vestiges of an ancient castle that once commanded the region apparently inspired Father Xavier who then exclaimed:

"This is an outstanding location.

This is where we should built a gigantic statue of Our Lady, a statue that would be visible from afar in the manner of a beacon."

The idea had come up!

However, it was now necessary to find the way of funding the construction of Notre-Dame-de-France statue! 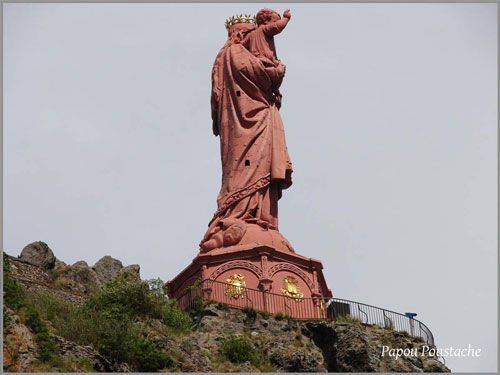 Virgin Mary with the Child Jesus 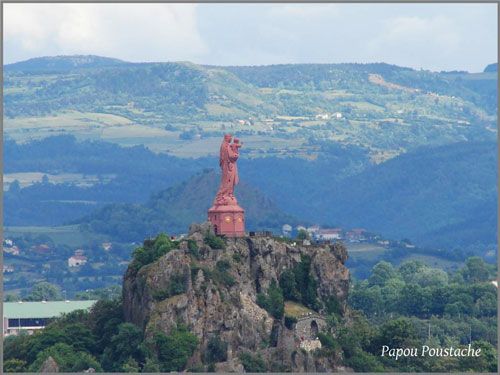 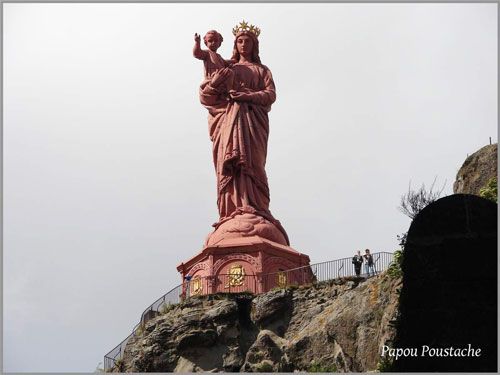 Here is an idea of its size

The public subscription was therefore launched on July 16, 1850 and money collected during the daily services and town festivals.

Amazingly, the one million gold francs collected was sufficient to carry the project ahead.

All they needed was a talented sculptor!

The diocese therefore launched a contest and on October 9, 1853 selected Jean Bonnassieux’ project among 30 others.

However, Bonnassieux’ success triggered much envy as nasty rumors soon started to spread.

Some indeed claimed that he made a serious design error when he positioned the Child Jesus on the Virgin's arm.

The unfounded rumors however died long before Bonnassieux!

Notre-Dame-de-France was cast with the bronze recovered from the Russian cannons captured at the Battle of Sebastopol, a gift from Napoleon III.

Construction was quite a challenge, though, because of its monumental proportions.

A life-size plaster prototype was first built in order to define the assembly joints of the different parts, as it couldn’t be cast in one piece.

Notre-Dame-de-France is therefore made of 105 cast iron pieces assembled together with 900 large bolts and various parts!

The outside of the mould produced from this prototype was made of silica and compacted clay, the inside of sand and resin.

The 16m tall statue is placed on a 6,70m high pedestal made from arkhose stone.

The whole monument has a circumference of 17m.

This will give you an idea of its exceptional size: Our Lady’s hand is 1,56m long and the Child Jesus'head has a circumference of 4,80m and weighs 1.1 tons.

The pedestal's interior is laid out over 3 floors opened with windows that boast spectacular views of the city and the area.

From there you climb a 16-bar ladder to reach Our Lady’s crown.

The statue and its pedestal were classified Historical Monument in 1997.

The full restoration, carried out in 2012, led to the re-opening of the staircases that were closed to the public for years for safety reasons.

Notre-Dame-de-France is one of the most visited monuments in Haute-Loire.

Credits: Photos and source text by Jean Piludu - Translated and edited by TravelFranceOnline