Chalus is located some 36km south-west of Limoges the capital of Limousin.

The medieval town is perched on a promontory in the Monts de Chalus.

This region of hills and chestnut forests, locally known as Pays de Feuillardiers, stretches in the foothills of the Massif Central.

This area is also part of Périgord-Limousin Nature Park.

Traces of human occupation show that Chalus Chabrol was inhabited as early as the Neolithic.

The primitive settlement indeed developed at the crossroads of six ancient roads.

These roads linked the south of France and Spain to the northern countries, in particular Jutland in Denmark, where ancient folks traded amber.

The Gallo-Roman vestiges uncovered also show that Chalus was an important step along the Roman road connecting Limoges to Périgueux. 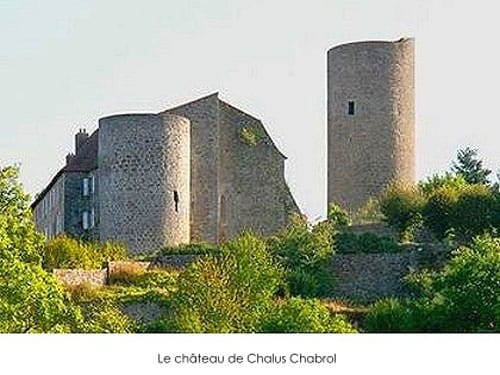 Castle and round tower 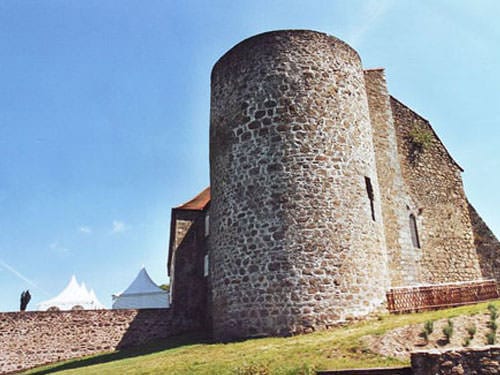 Chalus is perched on a promontory overlooking the river Tardoire and therefore boasts a prime strategic location.

The many weapons of the Merovingian era uncovered prove that it became an important stronghold from the early Middle-Ages onward.

Chalus was not only located at the crossroads of ancient roads, but also at the boundary of historic and rival regions.

It indeed stood between Limousin, the land of the Counts Limoges and vassals of the king of France, and the Duchy of Aquitaine.

The latter became the property of the Plantagenets dynasty when Eleanor of Aquitaine married Henry II of England.

The Viscounts of Limoges built the fortress of Chalus Chabrol in the 11th century, in order to control the road Limoges-Périgueux and therefore compete with the road linking Bourges to Bordeaux.

The increase in traffic resulted in the development of the medieval town (Villehaute).

It also led to the construction of the Abbaye de l’Abeille, which was placed under the authority of Abbaye des Augustins in Limoges.

Richard the Lionheart died in the Castle of Chalus Chabrol

The castle was besieged countless times over the centuries!

The first siege date from 1193 and was led by mercenaries soldiers at war against the bishop of Limoges.

The second siege is the most famous.

Indeed, on March 26, 1199 Richard the Lionheart, King of England, was mortally wounded by a crossbow.

He died on April 6 at Chalus Chabrol in the presence of his mother Eleanor of Aquitaine, who rushed back from Fontevraud Abbey to be at her son’s deathbed.

A recumbent statue of Richard the Lionheart was later placed in the castle’s enclosure.

This English defeat allowed the King of France Philippe-Auguste to begin the reconstruction of the French Kingdom.

Ten years later, the Maulmont built the Château de Chalus-Maulmont on the opposite bank of the Tardoire.

The 4th siege took place in 1406 in the midst of the Hundred Years War.

The 5th siege occurred in 1569 during the Wars of Religion.

The Admiral Coligny and his Protestant army (including the young Henry of Navarre, the future Henry IV) occupied Chalus.

They defeated the troops of the King of France on June 25 of the same year.

They were therefore able to reach Périgord, where they introduced the Protestant faith.

Sporadic conflicts between Huguenots and Catholics continued locally until 1592.

Chalus Chabrol was located right at the centre of the conflict zone because of its strategic position.

The Wars of Religion ended in 1598 with the signing of the Edict of Nantes.

Vestiges of the fortress

The fortress became property of the French State.

Sadly, it was mostly dismantled during the French Revolution.

All that is left are a round tower, once part of the private apartments, and the round donjon.

Locals say that the arrow that killed Richard was drawn from this donjon.

The Count of Bourbon-Chalus recovered his castle in the mid 19th century and restored it partially.

The castle of Chalus Chabrol is classified Historical Monument.

Not only was medieval Chalus Chabrol at the boundary of historic territories, but it also stood in an area essentially dedicated to cattle breeding.

It therefore became a major market town, renowned for its fairs.

The introduction of chestnut trees in Limousin during the 18th century resulted in the emergence of a new industry: chestnut wood processing.

The men who processed chestnut wood were called Feuillardiers.

This name evolved from feuillards, the name given to the young chestnut shoots.

The Feuillardiers turned the feuillards into barrels circles, baskets for crustaceans and stakes for vines and slats.

Photos Wikimedia Commons: header-  Round donjon and round tower - tower