In 200BC, the Gaulish tribe Petrocorii (The four tribes) founded their capital Vesunna on the banks of the Isle River.

They chose the site of Vesone, a sacred spring that surfaced where the antic north-south road met the river.

The Romans invaded Aquitaine in 16BC and transformed the Petroricii's oppidum into a larger city and spa.

Vesunna became the City of the Petrocorii - City of the Pétrocores, a name that evolved into Périgueux and Périgord.


The well-established and flourishing spa, then known as La Cite, had a forum, basilica, amphitheatre, arena, aqueduct and several temples and mansions.

However, the Barbarian invasions of the 3rd century AD and the Visigoths' in 418AD reduced La Cite to rubble.

This ancient district is still referred to as La Cite to this day. 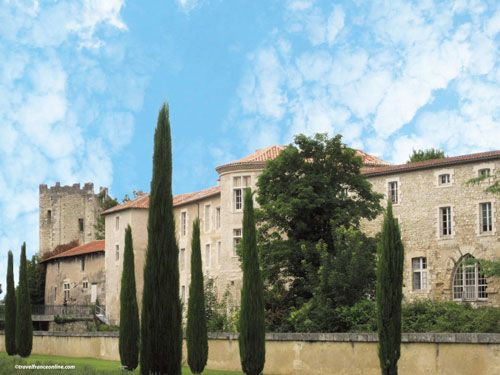 All that is left of the once lively La Cite, is a series of ruined carved stones, columns, capitals and other architectural features.

The inhabitants indeed dismantled most buildings and monuments in order to erect a rampart during the invasions.

This rampart had 24 defense towers and 3 gates.

Sadly, La Cite never recovered and by the end of the 5th century had shrunk to the size of a small fortified village.

Finally, the Protestants destroyed most of the remaining rampart during the Wars of Religion! 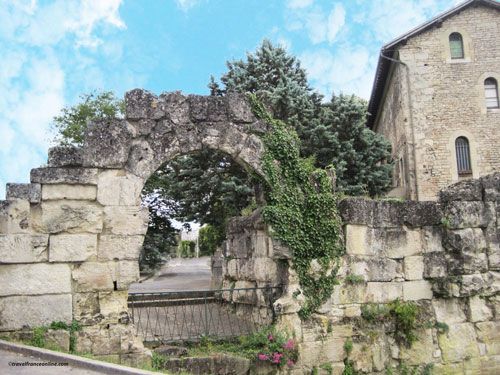 The Porte Normande is the only remaining gate (out of 3).

It was named after the Norsemen when they sailed down the river Isle from Bordeaux during their 9th century raids.

The understated yet impressing Maison Romane, next to it, dates from the 12th century.

It sits on the foundations of the rampart and against a defence tower.

Its vaulted crypt contained an altarpiece depicting a bull sacrifice (autel taurobolique), which is now exhibited in the Musée du Périgord in St-Front District. 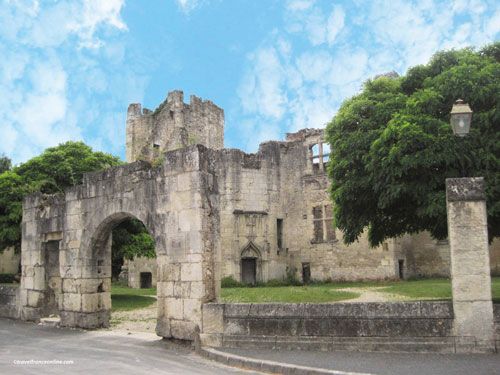 The Barrière, an old aristocratic family who lived in the Cite, built the fortified mansion against the Gallo-Roman rampart, next to the Maison Romane.

These include two towers, mullioned windows and Flamboyant carvings above the entrance door.

The Château Barrière was listed Historical Monument in 1862. 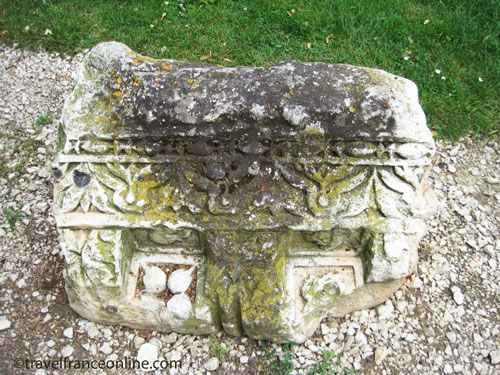 The amphitheatre-arena dates from the 1st or 2nd century AD.

It was located on the outskirts of La Cite, as it indeed needed extensive space in order to set up all the logistics required (school of gladiators, the penning of animals etc...)

All that is left today are a few steps and arches.

However, these meager vestiges still allowed researchers to evaluate its original dimensions.

They therefore worked out that the amphitheatre had 80 bays laid out over a 141m long by 118m wide area.

Its remaining stones served to erect a fortress during the Hundred Years War.

This building, which stood on the site of the amphitheatre, was pulled down a few centuries later and used as a quarry.

The amphitheatre ruins were listed Historical Monument in 1840, and the Jardin des Arênes landscaped among the ruins.

Finally, countless vestiges of La Cite are scattered among the surrounding private properties.

You will discover countless vestiges here and there as you stroll along the district. 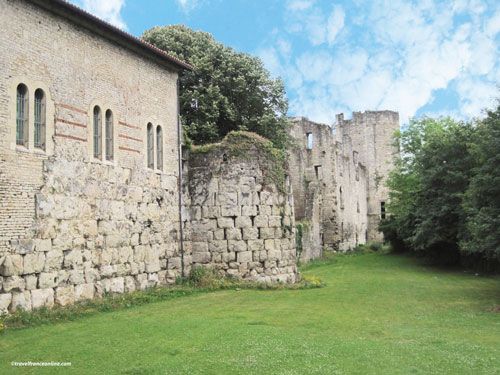 The Tour de Vésone was part of the Roman temple that stood a couple of hundred meters farther south.

The 2nd century AD temple was dedicated to the goddess Tutela Vesunna.

It stood on the land of Count Wilgrin de Taillefer, who bequeathed it to the city of Périgueux after at his death.

The tower was listed Historical Monument in 1846.

The Tour de Vésone was the Cella of La Cite's great temple.

The Cella was the temple's sacred heart, which was only accessible to the priests.

The temple was a perfect illustration of Gallo-Roman architecture.

It was indeed the focal point of a 141m long by 122m wide area situated on the Forum, the heart of La Cite.

The still impressive tower stood on a podium and a 23 columns peristyle encompassed it.

A rectangular pronaos supported by six columns led to it; their vestiges are today scattered in the park.

The monumental gate opened the tower's eastern side.

All that is left of the marble slabs covering the interior walls are the metal hooks which held them on to the stones.

The peristyle, the porticoes and the two basilicas that framed the tower have also long disappeared.

However, the impressive ruined tower was beautifully restored. 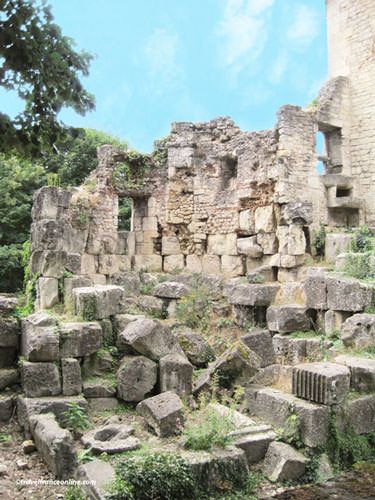 Vestiges of the Gallo-Roman rampart 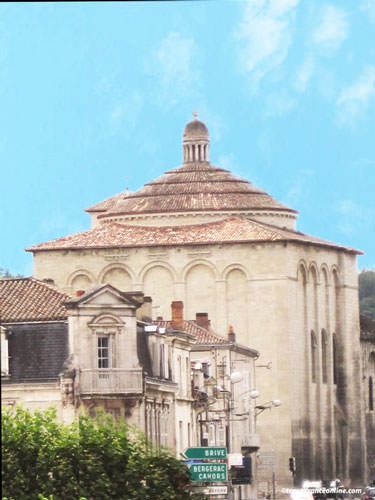 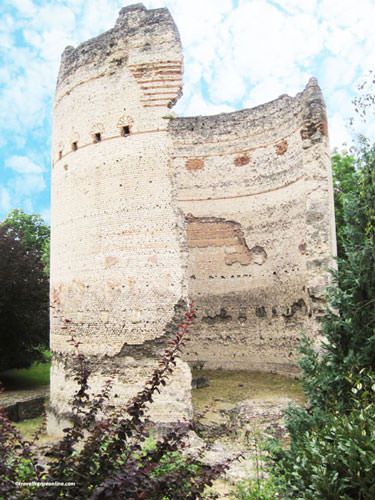 The church was built in the 11th-12th centuries in order to replace the church erected in the early 6th century on the site of a Roman Temple of Mars.

Various alterations, including the four domes aligned in a row behind the bell tower, turned it into a superb illustration of Périgord-Romanesque architecture.

However, this first Christian sanctuary in Périgueux was seriously damaged during the Hundred Years War.

In 1577, the Protestants destroyed the two western bays, their domes and the bell tower as well as the episcopal palace.

Only the two eastern bays survived and the bell tower was restored in 1620.

The church was once again devastated during the events of the Fronde in 1652.

However, it remained the cathedral of Périgueux until 1669, when the episcopal seat moved to Saint-Front Church.

Saint-Etienne de la Cite was fully restored to its original Romanesque style and re-dedicated during the Second Empire.

It also shelters the tomb of Jean d’Astide, the bishop of Périgueux (1160 to 1169) who commissioned its construction. 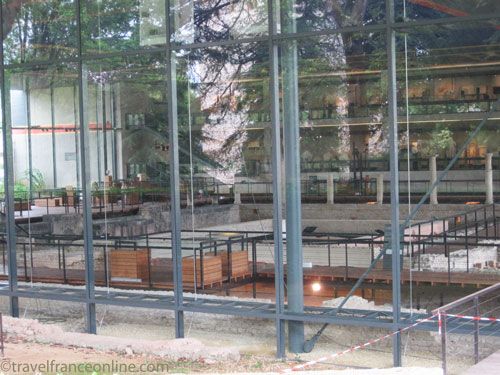 The mansion dates from the 1st century AD, however, its foundations were raised in the following century in order to protect it from the river flooding.

It stood at the very center of La Cite, next to the Tour de Vésone and the Forum and a stone's throw from the amphitheatre-arenas.

The quality, sophistication, decoration, size and prime location of the building suggest that the Domus de Vésone was an official palace.

This magnificent 4000m2 Roman mansion was laid out around a central courtyard delineated by an elegant peristyle.

It had an hypocaust heating system, private baths and numerous outbuildings.

Large sections of the outstanding frescoes and mosaics that adorned it were fortunately recovered.

The vestiges of the Domus de Vésone are now exhibited in situ under a glass and metal structure created by the architect Jean Nouvel.

A network of walkways and balconies positioned just above the vestiges allow visitors to admire the layout and the numerous architectural elements.

The Vesunna Museum opened to the public in 2003.

The ongoing excavations will most likely uncover more exceptional items in the years to come.