Le Cafe de Flore is located at the junction of Rue Saint-Benoît and Boulevard Saint-Germain.

It is one of the landmarks of Saint-Germain-des-Prés.

It takes its name after a statue of Flora, the Roman goddess of Flowers and Fertility.

The statue then stood on the opposite pavement of the boulevard.

The establishment opened in 1887 and soon attracted the intelligentsia of the time.

However, it was not really until 1913 that it started to become one of the most sought after literary cafes of Paris.

It was indeed at this time that Guillaume Apollinaire settled there along with André Salmon and two other friends in order to publish Les Soirées de Paris.

Young emerging artists such as Picasso, Matisse, Braque and Léger participated as illustrators to this literary and artistic magazine!

Apollinaire and his friends André Breton and Louis Aragon are considered the forefathers of Surrealism, which they 'invented' at the Cafe de Flore in 1917. 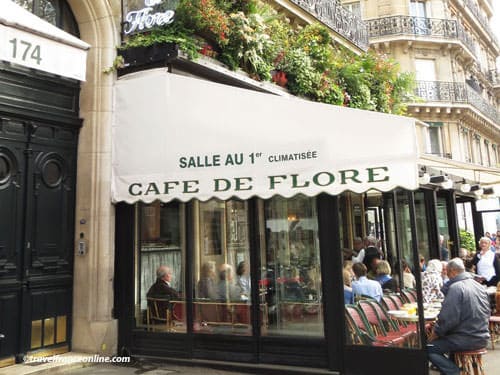 The Mecca of Arts and Letters

In the 1930s the Cafe de Flore was fully redecorated in Art Deco style.

It became the meeting place of the Parisian smart set, men of letters, comedians, filmmakers and singers (Giacometti, Picasso, Queneau, Zadkine to name a few).

The cafe reached consecration in 1939.

Its new owner, Paul Boubal, indeed turned it into the Mecca of the arts and letters.

The intelligentsia of the time soon flocked behind Jean-Paul Sartre and Simone de Beauvoir, Eugene Ionesco or Emil Cioran.

In 1994 Frédéric Beigbeder founded the Prix de Flore, which is held each November and rewards promising young authors.