The Abbaye de Cadouin is nestled in the valley of the river Bélingou, in the heart of the Forêt de Bessède.

It stands at the boundary of the Périgord Noir and Périgord Pourpre, midway between Sarlat-la-Canéda and Bergerac.

UNESCO listed the abbey church under the label Chemins de Saint Jacques de Compostelle, as it also stood along one of the pilgrimage roads.

Géraud de Salles founded the Abbaye de Cadouin in 1115 at the initiative of Robert Arbrissel.

Abrissel was the founder of the prestigious Cistercian Abbaye de Fontevraud in the Loire Valley.

The Abbaye de Cadouin was affiliated to the Cistercian Order in 1119 and consequently generously endowed with land and fiefs.

Vaulted gallery in the cloister

A superb illustration of Cistercian architecture

The abbey church was consecrated in 1154 and is a superb illustration of Cistercian architecture.

It indeed boasts a wealth of exceptional architectural features.

These include three elegant naves, a superb cupola adorned with frescoes and a choir supported with capitals decorated with elaborate plant sculptures

Three small round openings, one on the facade and three in the cupola, let the sunlight bathe the interior of the church during the spring and autumn equinoxes.

You can clearly see two of them on the slideshow's photos (church's interior and facade).

Indeed, it was built (as the whole abbey) with the local golden limestone.

Murals and sculptures in cloister's gallery

The Holy Shroud of Cadouin

The Abbaye de Cadouin was one of the most influential abbeys of the kingdom until the French Revolution.

This was due to the fact that it contained the precious Holy Shroud!

It all started when Adhemar de Monteil, the Pope legate, brought the relic from the Holy Land after the First Crusade.

He originally intended to keep the shroud in his cathedral in Le Puy en Velay.

However, the canons questioned the authenticity of the relic, which was sent to the parish church of Cadouin.

The monks of the Abbaye de Cadouin recovered the precious relic when the little church burned down in 1177.

As a result, the abbey became a major place of pilgrimage in France and the Christendom!

This popularity waned, obviously, during the Wars of Religion.

However, it was revived in 1644 due to the polemic concerning the authenticity of the Holy Shroud.

Then came the French Revolution.

The mayor of the village of Cadouin placed the relic in safe place straight away.

The shroud was returned to the cult in 1797.

However, the pilgrimage was not reinstated until 1866 at the instigation of the bishop of Périgueux.

The bishopric canceled the pilgrimage in 1934.

A Jewish scholar, indeed, proved that the linen and silk shroud of the Abbaye de Cadouin was not the Holy Shroud in which Jesus was wrapped; it was woven in Egypt in the late 11th century.

The village of Cadouin

Cadouin isn't as lively as it used to be then, however you'll be charmed by its picturesque atmosphere.

It has retained a few medieval architectural vestiges.

One of them, the Porte Saint-Louis, dates from the 12th century.

It is sadly the only remaining of the three original gates that accessed the monastic enclosure.

The pilgrims’ hostel stood outside the enclosure, near the Rue de la Porte St-Louis, the village's main street.

This street used to be lined with countless shops, stalls and inns that catered for the pilgrims.

Many ancient houses are still standing and have retained the charm of a bygone era.

Take the time of visiting the village, it is small but charming! 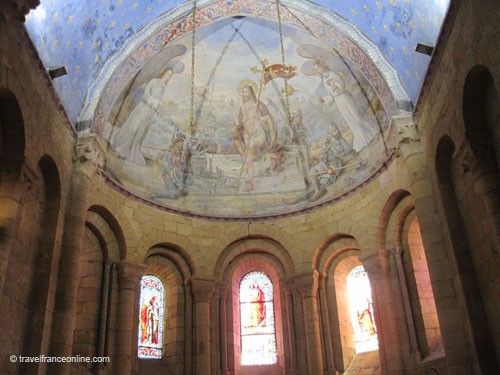