The Little Saint of Conques

Saint Foy Feast Day is a major annual pilgrimage, which attracts thousands of pilgrims to the picturesque medieval village of Conques.

The Abbey Church of Sainte-Foy, a UNESCO World Heritage Site, is indeed a major stopover on the road to Santiago de Compostela. 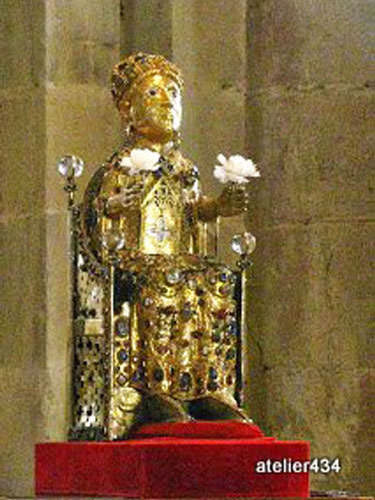 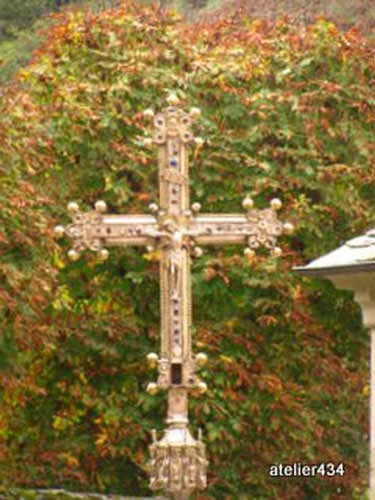 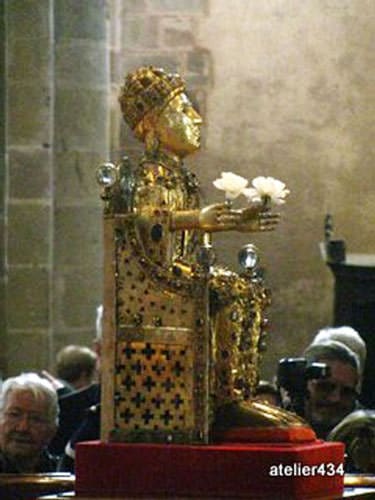 The Legend of Sainte Foy

Legend has it that Sainte Foy  - we don't know her pagan name - was born in the year 290AD in the city of Agen to wealthy and noble, but pagan parents.

However, the little girl nursemaid who was Christian, initiated her to her faith.

In 303AD, Emperor Diocletian saw the spread of Christianity as a threat and persecuted all those who had converted to the new faith.

Sadly, the story relates how Sainte Foy was denounced to the local governor Dacian by her own father!

Put on trial, the little girl who was then 12 years old, refused to make a sacrifice to the goddess Diana.

As a punishment, Dacian had her tied naked to a metal grill set over a roaring fire.

However, a miracle occurred; the snow indeed suddenly started to fall, extinguishing the fire and covering her nakedness.

This didn't save her though, as Dacian had her beheaded.

The little girl, who died for her faith, became worshiped as Sainte Foy.

Christians secretly took her remains to safety in Agen, where they were kept for nearly 500 years. 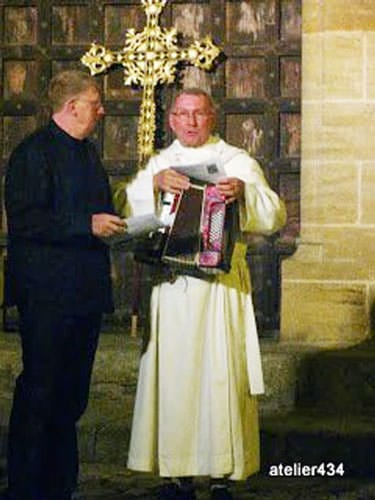 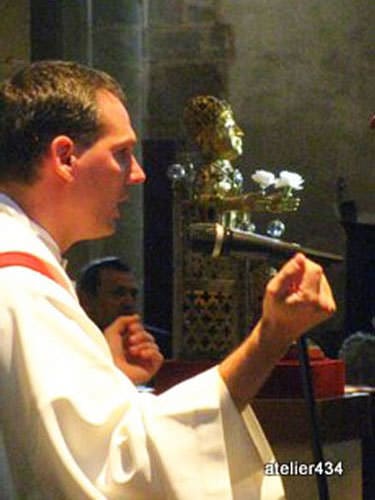 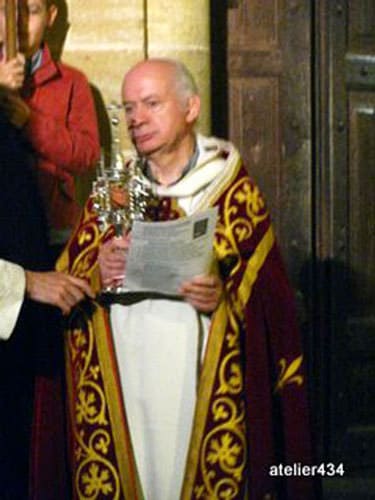 In the mid 9th century, the abbey of Conques was thriving but was slowly loosing pace - and therefore revenues - to other abbeys of the region!

It was a major religious center in the region, however, it didn't have any relic to attract pilgrims.

The monks therefore decided that their abbey should be the custodian of the relics of Sainte Foy!

To do so, they sent one of them disguised as a common man in order to earn the trust of the monks of the abbey of Agen.

The patient monk served them for 10 years and eventually got his chance in 866!

He stole Sainte Foy's relics and brought them back to Conques where they have been venerated ever since.

As you can imagine, the monks of the abbey of Conques attributed more and more miracles to their 'little Saint' as the years went by.

She therefore became associated with joca, tricks or jokes, often playing tricks on the local nobility.

However, like any other young girl, Sainte Foy loved jewelry and gold.

Therefore, she would often demand a gold trinket from the wealthiest in exchange for a miracle or a cure!

She also became the patron saint of pregnant women and those who wanted to become pregnant. 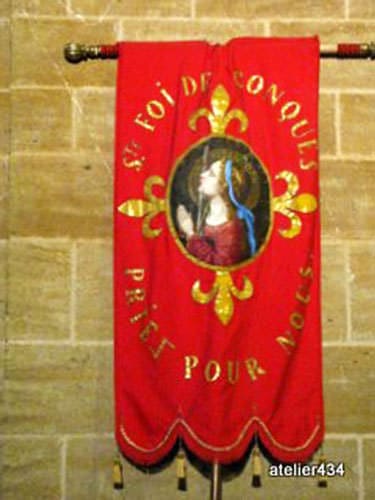 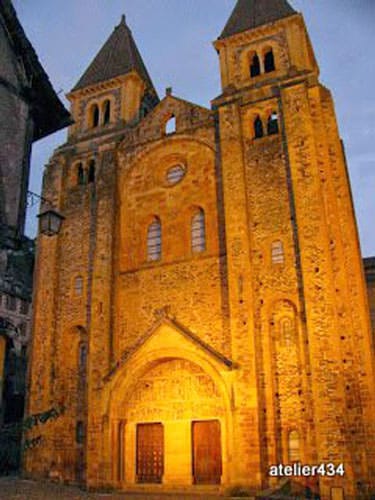 Abbey church of Conques at dusk 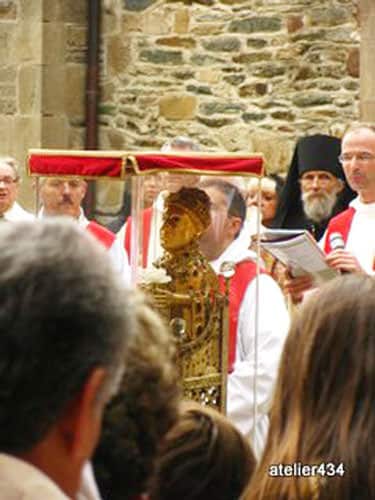 The abbey of Conques therefore accumulated a large treasury of gold and silver items encrusted with precious and semi-precious stones.

These are today exhibited in the Trésor, along with a seated statue, which houses Sainte Foy's relics.

The head of the statue, which is made separately from the body, is said to be either a copy of the death mask of Charlemagne or a portrait from the late Roman Empire!

An adult male face for a 12-year old girl is quite surprising! 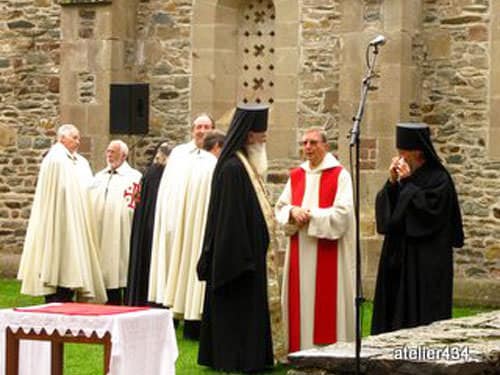 Dignitaries gather before the procession

Sainte Foy Feast is October 6, but the 'little Saint' is celebrated on the Sunday closest to this date.

Religious celebrations start at Vespers, when the faithful are invited to kiss the glass vial that holds Sainte Foy's relics.

A candlelit procession then takes place at 8.30pm from the church square or parvis.

Participants are given candles and song sheets, then the priests and monks begin to come out the church.

One holds the glass vessel containing the relics, a second bears a large gold cross and a third carries an accordion.

The crowd assembled on the parvis starts walking the cobblestone streets through the village illuminated by hundreds of flickering red and white votive candles.

Villagers indeed place candles in their windows and on their cars and lit votive on the low walls of their garden.

Shopkeepers place candles outside their shops and in the doorways.

It is quite atmospheric!

The procession stops at regular intervals for words and prayer before returning Sainte Foy's relics to the church. 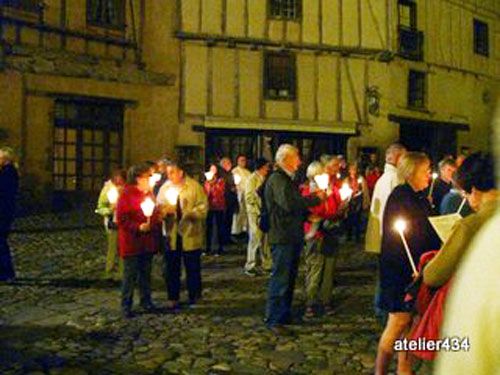 Crowd in the parvis 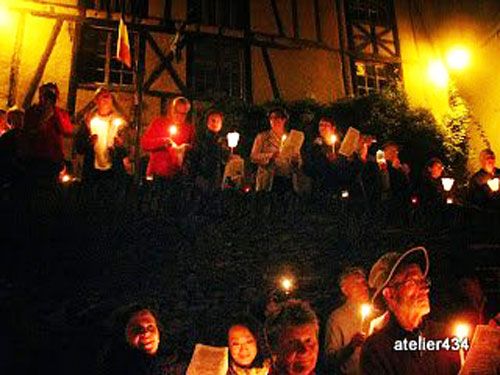 Then comes Sunday service; music plays, banners fly then the procession begins inside the church!

A gigantic gold cross, then Sainte Foy carried by her bearers, appear while the crowds sings her anthem.

Everyone falls in line behind the dignitaries as she is processed around the church.

The liturgy and the homily then reverence her while she seats, looking out at her people.

After the service, people are allowed a bit closer for photographs, then gather in the church square to watch Occitan dancers.

Dressed in full 18th century traditional costume and wearing wooden clogs, they entertain the crowd, while the priest and monks work the crowd doing their holy 'meet and greet.'

You won't be disappointed, and they will give you a glimpse into French culture that you are unlikely to find anywhere else.