La Roque Gageac is a picturesque village along the Dordogne River.

La Roque Gageac indeed simply hangs on a south-facing cliff-side and boasts spectacular views over the river and its fertile valley!

Prehistoric communities recognized the strategic location of the spot, as many vestiges of their permanent habitat was found along the cliff.

La Roque Gageac was therefore fully developed during the Gallo-Roman era and thrived from the river trade and all related industries. 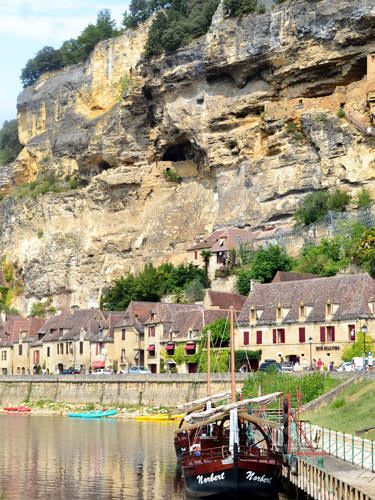 A gabare on the Dordogne 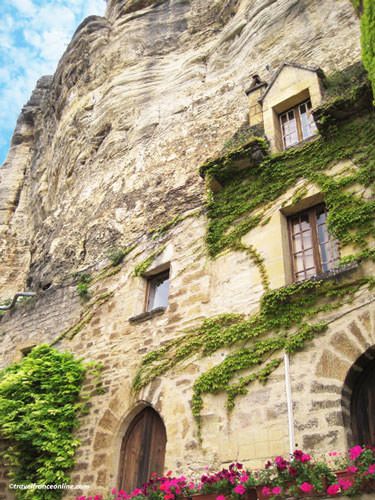 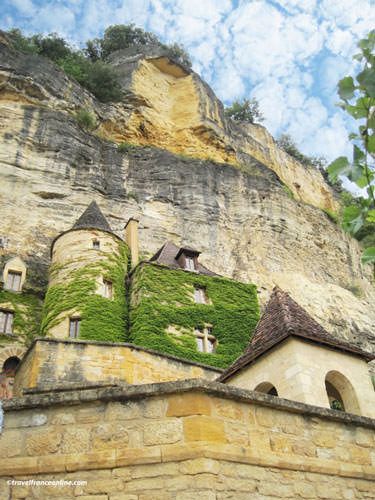 Manor-house built against the rock face

The Viking incursions of the 9th century and the start of the Franco-English conflict triggered by the marriage of Eleanor of Aquitaine to Henry II  led the local lord to erect a fortress.

This fort, built into the cliff, defended the village and its surroundings until the 17th century.

It was dismantled a century later when the cliff started to become unstable.

All that is left today are ruins that blend into the rock.

Space is limited in La Roque Gageac because the cliff drops abruptly, so you'll only find two village streets.

The main village lane runs along the base of the cliff and splits into perpendicular cul-de-sacs and alleys that lead to individual dwellings.

Houses were indeed built with the local creamy limestone and roofed with lauzes slabs.

The whole village takes all shades of yellow, ocher and red which evolve as the daylight progresses.

This unique situation and atmosphere earned it to be listed as one of the Most beautiful villages of France.

The dwellings located in the upper section of the village, are traditional troglodytes, built against the cliff.

Their beams are anchored into the rock face and adjust to its irregular shape and many asperities.

Humble dwellings and noble residences were therefore erected side by side, hardly separated by tiny herb gardens and courtyards.

Most of the village was beautifully restored, however, two properties really stand out. 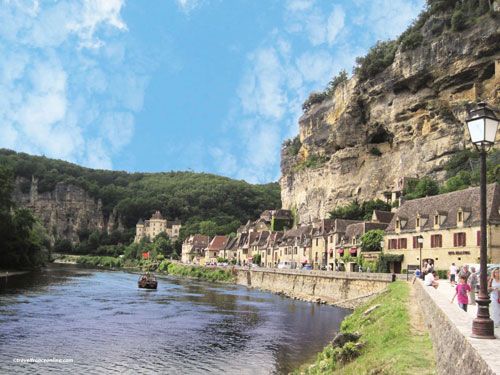 Village along the Dordogne River

A stroll in La Roque Gageac

The superb Manoir de la Tarde flanks the rock; its round tower and mullioned windows peak above the village.

The 19th century Château de la Malartrie is a pastiche of a 15th century Renaissance mansion.

It stands on the river bank, farther along the main road, on the western side of the village.

The church was erected on the cliff side, on the eastern side.

It now stands in an exotic garden planted with tropical plants and trees, which have marvelously well adapted to the local climate.

The south facing cliff indeed shelters them from the cold winds and provide plenty of sunshine. 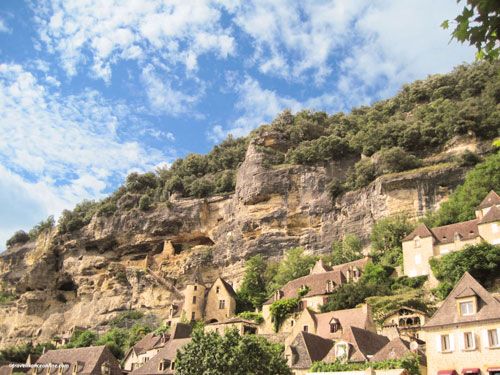 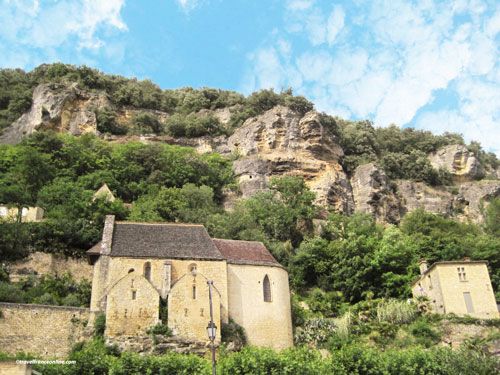 From oblivion to renaissance

La Roque Gageac once was a very active port with a long tradition of river trade.

Flat bottom barges, locally known as gabares, then transported a wide array of goods along the Dordogne.

River trade thrived from the Middle Ages until the mid 19th century.

Unfortunately, the development of the railway put an end to that era.

As a result, the little village soon fell into oblivion, and its population by two-thirds!

However, its name resurfaced in 1920 when natural erosion triggered the partial collapse of the ruined fortress.

The second major rock slide occurred in 1957 and nearly resulted in the village eradication.

Not only did the rock slide destroy the dwellings located in its path, but it also tragically claimed the lives of three villagers.

The main access road was blocked for months and the village became entirely inaccessible and bypassed!

The latest rock slide dates from 2007 when more of the fortress disintegrated.

The site is therefore now closed to the public for obvious safety reasons and a whole section of the village isolated.

The thriving tourist industry has fortunately revived this picturesque village and today attracts visitors from all around the world.

Tip: Pay parking is available by the village entrances, however, parking lots can be quite busy during the holiday season, so arrive early!