La Petite France is the historic district of Strasbourg.

Located on the Franco-German border, the city, which is today the seat of the European Parliament, celebrated its 2000th anniversary in 1988.

The historic heart lies on the western tip of La Grande Ile, the island encompassed by the river Ill and the Rhine.

This fertile enclave was already inhabited during the Paleolithic, but the first texts referring to the city date from 12BC.

This was when the Romans transformed the Celtic oppidum Argantorati into a military camp and romanized its name in Argentoratum.

The Alemanni and the Huns raided this city during the 5th century.

Clovis rebuilt it when he became king of France in the late 5th century and renamed it Strateburgum; this name came from the fortress (Burg) built along the main road (Strasse).

Between 362BC and 1262, Strasbourg was one of the few cities in the region to be the seat of a bishopric; it also became part of the Holy Roman Empire in the 10th century and was granted the status of free imperial city. 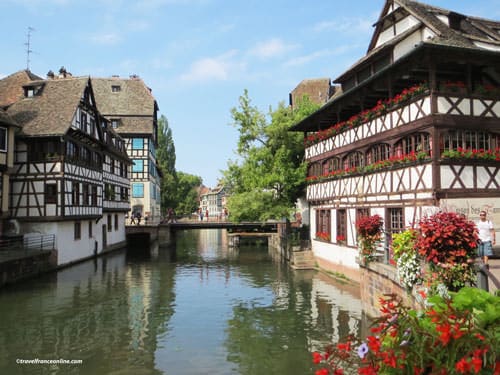 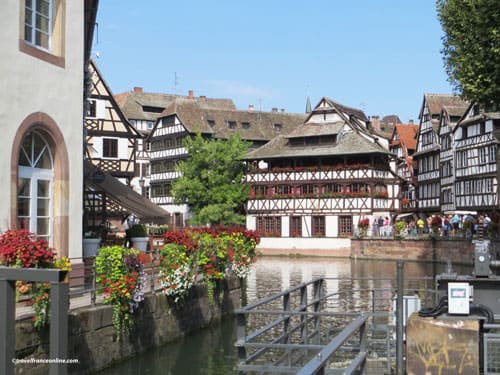 La Petite France developed through the centuries at the water's edge.

In the Middle Ages, it became the district of tanners, millers and fishermen, whose trades entirely depended on the river.

This industrious district became known as La Petite France during the 15th century.

However, contrary to what one might think, it was not the French Quarter.

It took its name from the Hospice des Verolés built to treat the soldiers of Charles VIII who had contracted syphilis during the Campaign of Italy!

Syphilis was then known as the 'French disease’! 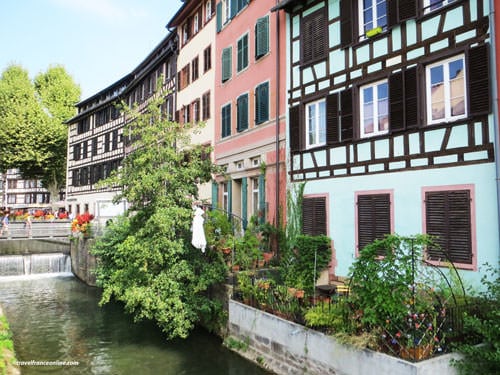 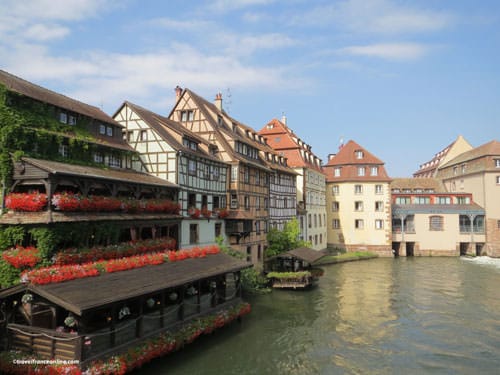 However, new ramparts were built in the 13th century to block access to the river.

In the 16th century, iron grids were affixed under their arches to prevent any attacker from entering the city via the river.

The wooden roofs were demolished in the 18th century and the bridges replaced with the current stone bridges in the late 19th century.

The Tour Malzenturn, which stood next to the Tour du Bourreau, burned in 1869 and its vestiges were pulled down. 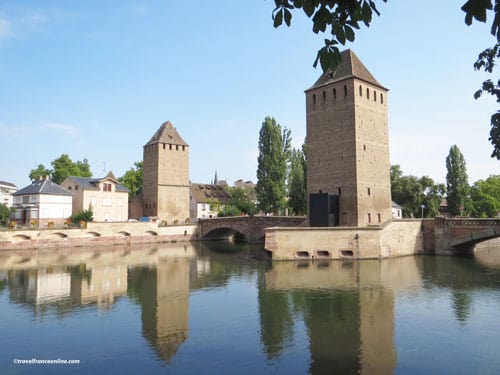 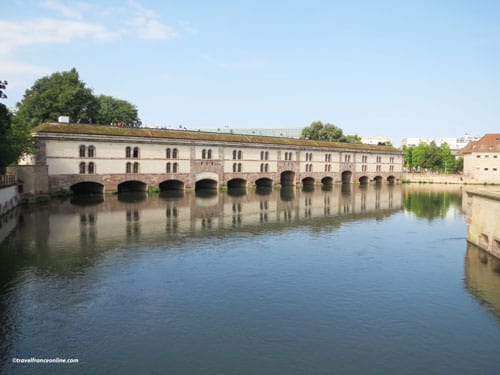 The engineer Tarade built the Barrage Vauban in the late 17th century from the plans of Marshal Vauban.

The imposing fortified dam that connects the two banks of the River Ill replaced the 3 covered bridges.

These had indeed become obsolete in the face of modern firefighting and artillery.

This bridge-lock is also known as Grande Ecluse, as valves closed its arches when under enemy attack.

The dam blocked the water and forced the river to overflow its bed to flood the surrounding fields and turn them into impassable marshes.

In 1966, the city of Strasbourg created a panoramic terrace on the roof-top of the dam, since known as Terrasse Vauban.

The Barrage Vauban was listed Historic Monument in 1971. 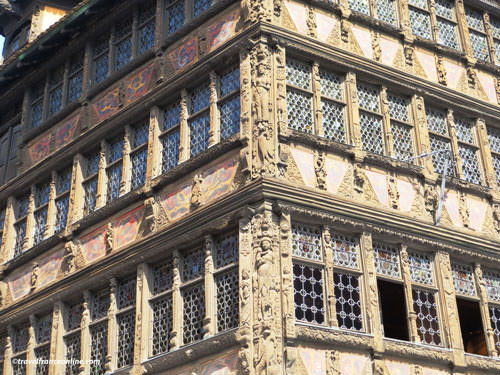 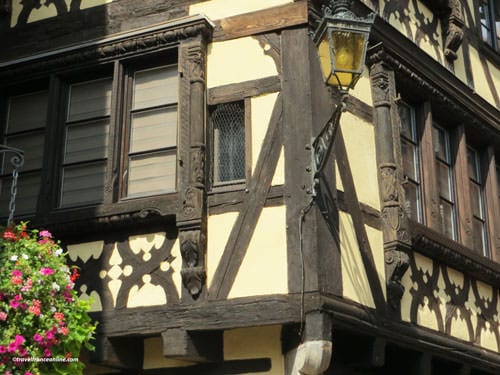 This arm of the river Ill, which delineates the northern side of La Grande Ile, was channeled and open to navigation in 1840.

It took its name from the secondary fortifications erected in the river bed during the 13th century to reinforce those that protected the island's bank.

This ‘false rampart’ was pulled down in the 19th century to create the canal dedicated to navigation and transport of goods. 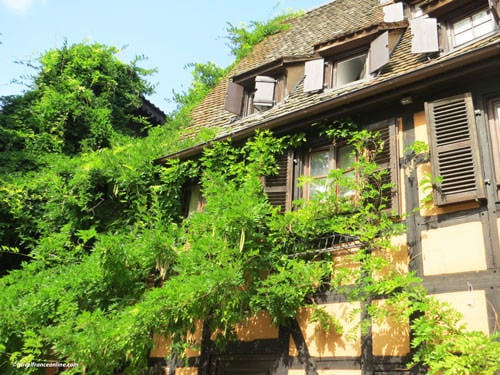 This historic district, fiercely protected over the centuries by successive ramparts, was not always so prestigious!

Indeed, the tanners who lived and worked there, washed the hires in the river and turned it into a sewer.

They have long gone, but their houses with their pointed roofs open with narrow skylights are still there; these once brought light to the attics where the hires were left to dry then stored.

In the 19th century, weirs were built on 3 of the 4 channels to use the hydraulic energy of the Ill.

Its waters indeed turned the wheels of the mills that produced the ice breads essential to conserve fresh products and the local beer!

The once industrious district has today become the epicenter of Alsatian gastronomy, as the old workshops today house legions of restaurants that cater to a wide scope of visitors.

One of the jewels of Strasbourg, the district was partly destroyed during WWII.

However, most of its 16th and 17th century traditional Alsatian architectural features could be restored or rebuilt.

Picturesque half-timbered houses with flower-covered balconies line cobbled alleyways and hang over the canals and their bridges.

One of the most photographed buildings is the Maison des Tanneurs, the former tanners guildhall, which was listed Historical Monument in 1927.

Several lanes start on Place Benjamin-Zix; they lead to the Ponts Couverts, but also to the Lutheran Church of St. Thomas, and to St. Pierre-le-Vieux, a dual church that serves Catholics and Protestants. 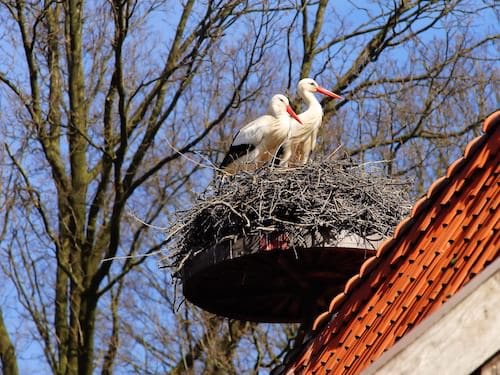 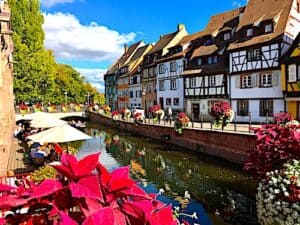 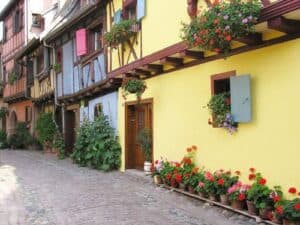