The name certainly doesn’t ring any bell to you; it didn’t to me either!

Wilhelm Lubrich was indeed one of the many soldiers of the German army who died during WWII.

The first time I heard his name was when I received an email from his great-grand niece, Natalia Skinder.

We regularly receive emails from readers who tell us the story of a relative who died during WWI or WWII.

Their stories are always heartrending, but Wilhelm’s story was even more poignant!

She indeed explained me that she had found that Wilhelm was buried in Marigny.

She’d also found the section, the row and his grave's number!

All she asked was: "could I please, one day, take a photo of his grave for her and her family?"

Of course, I could!

All this was so touching! 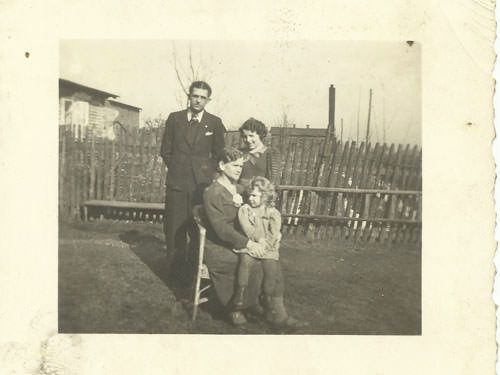 Wilhelm Lubrich and family before the war 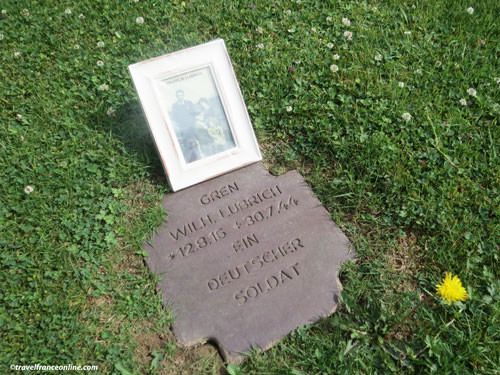 Wilhelm's tombstone with the photo

However, what touched me even more was Wilhelm’s full story.

Indeed, Wilhelm was not German, but Polish!

“Wilhelm and his family lived in Silesia, so he was forced to fight on the German side during WWII.

Wilhelm served as a grenadier and was killed on July 30, 1944 in Normandy.

He was very close to his sister Klara, Natalia’s grandmother.

Tragically, Wilhelm died 27 days after she married Hugo in Katowice.

The family didn't have any information about him for a couple of months - but then the sad news eventually came to Poland, they were shocked!

Indeed, no one thought that Wilhelm wouldn't return!

He was so young and he had plans; he was such a nice man, always smiling and enjoying life.

A caring person, he also looked after his sisters and in particular after Klara who was terribly affected by the premature death of their mother in 1938.

He remained close to Klara during the funerals .

Natalia’s family still have pictures of that sad day.

They indeed show Wilhelm hugging his sister and giving her support.

She loved him very much; they were inseparable.” 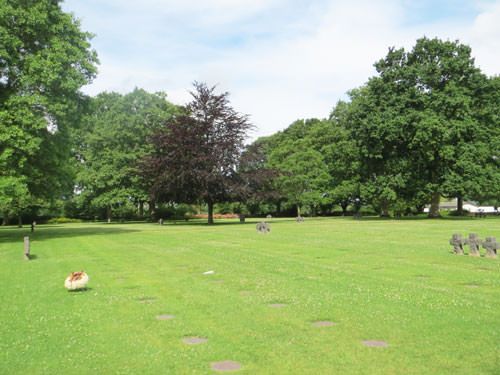 Wilhelm's grave among his companions' in arms 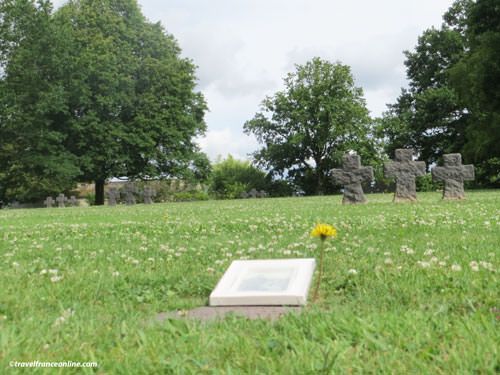 The Grave of Wilhelm Lubrich in Marigny German War Cemetery

As I wrote above, Natalia’s message touched me deeply, and I knew that I had to do something special for her and her family.

I also wanted it to be even more special for Wilhelm; I wanted him to be a face, and no more a name on a tombstone!

I therefore downloaded the picture Natalia sent me, plasticized it, placed it a plastic frame which I placed into a sealed plastic bag, in order to make them waterproof.

The next part was my visit to Marigny with a group of friends and family members.

We easily found Wilhelm’s grave, thanks to the information Natalia sent me.

Emotion grew as we walked among the hundreds of graves, and eventually found ourselves in front of the tombstone engraved with his name!

I knelt down and gave a little prayer before placing the photo on his grave.

Unknown to me, one of our close family friends, a former soldier, had taken his military beret with him and gave Wilhelm the Military Honours.

All this was quite emotional, especially when we discovered that Wilhelm shared the grave with ‘Ein Deutscher Soldat’, another poor soul whose identity was never uncovered!

His family never knew where his remains lie; he has no face and no name … 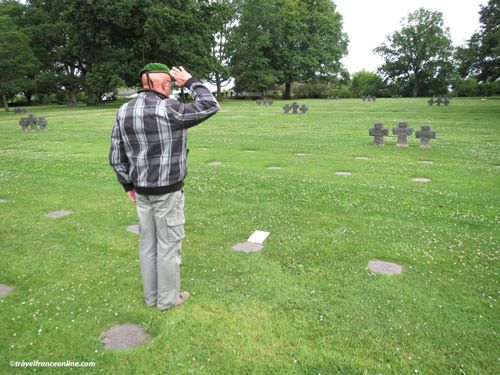 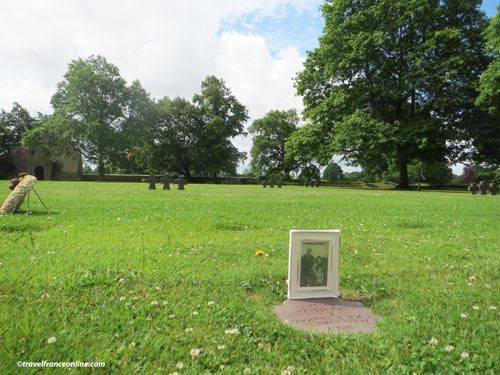 The two local men who maintain the cemetery do a fabulous job!

Indeed, they  mow the grass once a week, but also weed and look after the trees, and are more than happy to assist.

All the items placed on the graves are stored away in one of the maintenance buildings during winter in order to protect them from the weather.

Comes spring, the maintenance team replaces them on the graves.

Natalia only asked me if, one day, I could take a photo of Wilhelm’s resting place.

She didn’t know I would place the photo she sent me on his grave.

Her 'Thank You' message was so nice to read!

She has since sent me additional photos of Wilhelm, and told me a little more about the history of her family.

I feel very privileged for her trust!